Technically, the Pound remains bullish for the near term in general. 1.2582 support in GBP/USD, 135.74 support in GBP/JPY and 0.8811 resistance in EUR/GBP remain intact. Further rise is expected in Sterling. A focus today would be on USD/JPY, which drew support from 4 hour 55 EMA and recovers. Focus is back on 108.93 temporary top. Break will resume whole rise from 104.45. Similarly, EUR/JPY is eyeing 121.46 temporary top too.

Johnson and Corbyn couldn’t agree on timetable for Brexit bill

UK Prime Minister Boris Johnson met opposition Labour leader Jeremy Corbyn today. But they failed to agree on a timetable to press ahead with the Brexit Withdrawal Agreement Bill.

Labour spokesperson said “Jeremy Corbyn reiterated Labour’s offer to the prime minister to agree a reasonable timetable to debate, scrutinise and amend the withdrawal agreement bill, and restated that Labour will support a general election when the threat of a no-deal crash-out is off the table.”

Afterwards in the PMQs, Johnson accused Labour of seeking to scupper Brexit. Corbyn called for “the necessary time to improve on this worse-than-terrible treaty”.

It’s reported that EU27 leaders would move quickly to approve request for another Brexit extension. It’s noted that it’s the first time UK has not rejected a Brexit deal. And there was agreement among MPs that there is not enough time to complete the whole legislation process before the October 31 deadline. thus, the principle for the extension is “completely uncontroversial”.

Germany’s government spokesman Steffen Seibert also said that ” I can say on behalf of the federal government that Germany will not stand in the way of an extension.” UK Prime Minister Boris Johnson still seemed to disagree on the delay, European Council President Donald Tusk talked to UK Prime Minister Boris Johnson on phone and explained why he recommended EU 27 leaders to accept UK’s request for another Brexit extension.

Italy Gualtieri: Debt reduction has to be gradual and sustainable to be credible

Italian Economy Minister Roberto Gualtieri said today that the European Commission for was challenging the country’s draft budget. Instead it’s only asking for clarifications on the path of debt reduction.

He also emphasized “Italy has made use in the past of ‘flexibility’ on public finances because public debt must be lowered but the reduction can only be gradual and sustainable to be credible.”

Separately, RBNZ Assistant Governor Christian Hawkesby said he’s “very” happy with the way in which interest rate cuts are feeding through into the economy. Additionally, he added that rising house prices could boost consumption and ultimately inflation.

USD/JPY recovers after drawing support form 4 hour 55 EMA but stays below 108.93 temporary top. Intraday bias remains neutral first and more consolidations could be seen. In case of another retreat, downside should be contained well above 106.48 support. On the upside, above 108.93 will target 109.31 key resistance. Decisive break there will carry larger bullish implications next target will be 100% projection of 104.45 to 108.47 from 106.48 at 110.50. 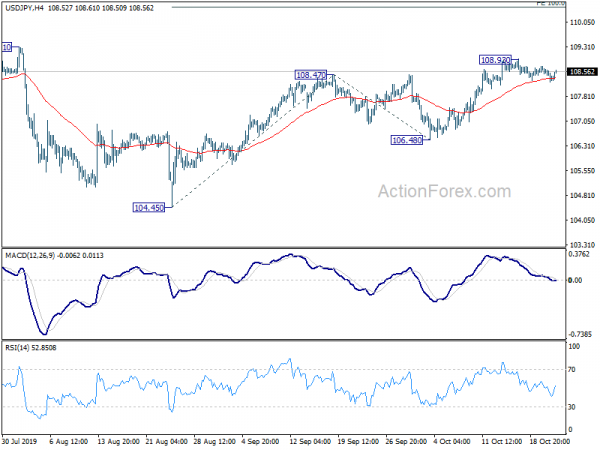 In the bigger picture,strong support was seen from 104.62 again. Yet, there is no confirmation of medium term reversal. Corrective decline from 118.65 (Dec. 2016) could still extend lower. But in that case, we’d expect strong support above 98.97 (2016 low) to contain downside to bring rebound. Meanwhile, on the upside, break of 112.40 key resistance will be a strong sign of start of medium term up trend. 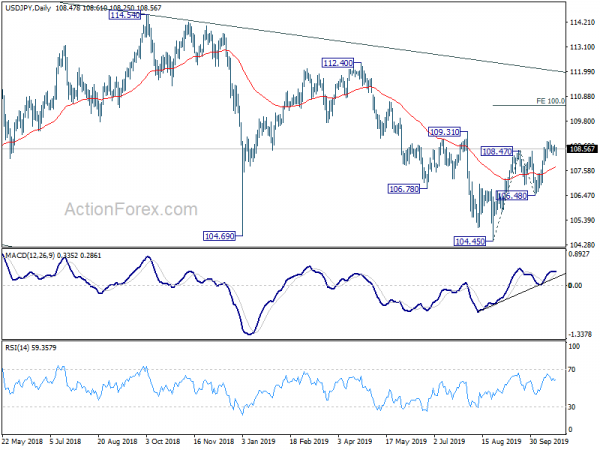