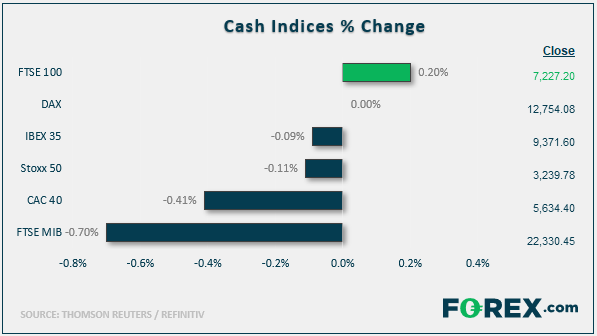 The Brexit process finally looks like it’s moving again, though new frustrations have almost certainly scotched Boris Johnson’s wish to hit the 31st October deadline and the pound’s rally is beginning to fray. The PM has reportedly met the leader of the opposition Labour Party, taking Jeremy Corbyn up on his offer for talks to come up with a mutually agreeable timetable for completing Brexit legislation No agreement so far. MPs voted down Johnson’s fast-track programme for spiriting the deal into law last night, putting the “great advance” (according to the PM) at risk, as a slower pace of discussion in Parliament will almost certainly see it amended, possibly causing various factions who supported it to drop away

Chip stocks are under renewed pressure and weighing on global markets after Texas Instruments’ results became the biggest upset of the earnings season so far. TXN has competition from Caterpillar. CAT missed quarterly earnings expectations and cut earnings and revenue guidance sending its shares sharply lower. The giant Dow Jones Industrial Average stocks are particularly weighing on DJ futures ahead of Wall Street’s open. In other hotly anticipated earnings, Boeing’s third quarter results appeared to miss estimates sharply again as it continues to deal with the fallout from the fatal 737 MAX debacle

China signalled it may replace the leader of Hong Kong after months of violent protests, whilst the extradition bill that triggered them has now been formally withdrawn

One assist for equity sentiment: U.S. Commerce Secretary Wilbur Ross has broken the ice over Washington’s lower-intensity trade conflict, with Europe, indicating the White House might favour talks instead of immediately moving to long-feared tariffs on automobile imports

Another assist (sort of): OPEC is considering whether to reduce production further to stave off the impact of falling demand. Oil prices remains weak for now though. The weekly tally from the U.S.’s key oil industry body points to a bigger than forecast inventory build (up 4.5 million barrels vs. a 2.2-million-barrel rise expected) when official EIA data are released later

After a volatile initial reaction, Boeing shares turned about 1% higher as the U.S. cash session approached. Q3 results were unmistakeably dire, including a second straight quarter of negative free cash flow, and reduced production schedules across models including the 737 MAX and 787. However, Boeing raised its 737 MAX output forecast by 36%. And, after an additional $900m in costs for the faulty aircraft, no further significant compensation expenses are envisaged. Less plausibly, Boeing stuck to a Q4 timeline for the resumption of 737 MAX flights. Still, with the stock down 20% already, this year, deeper downside was always going to be minimal from here

Shares in the other giant U.S. industrial bellwether reporting on Wednesday aren’t faring as well. Caterpillar shares fell as much as 6.5% after the world’s biggest construction machinery maker missed earnings and revenue forecasts and cut forecasts of both again for this financial year. Whilst lowered guidance had been widely pencilled in, the scale of the cuts looks to have taken investors off guard. The midpoint of CAT’s new 2019 EPS forecast is $10.84 compared with a $12.25 midpoint previously

Europe’s STOXX index is struggling as Texas Instruments’ (TXN) disappointing results and downgraded Q4 estimates drag this region’s technology shares. TXN was down 9% in pre-market deals a while ago. The IT industry is the biggest STOXX super-sector underperformer. EU financials/banks are also soft, possibly with an eye to Thursday’s ECB statement, the last steered by Mario Draghi. UK housebuilders also stand out on the downside after the latest Brexit snarl-up After dropping below key levels in the wake of Tuesday night events in the UK parliament, sterling is looking perkier, latterly around $1.2885, though well off $1.30 tops from Monday

The big picture sees the dollar steadying from a recent correction as risk-on exposure appears to be unwound. The effects on G10 currencies are uneven, particularly as profits are being taken against commodity currencies. Sterling is both a marginal beneficiary of and at a disadvantage from these dynamics, against the Aussie and yen respectively. The yen hits a one-week high against the greenback as EUR/JPY also slides as stops are triggered and AUD/JPY follows suit

The euro ticks down against the dollar, though rose 0.4% vs. Norway’s krone earlier and saw its best levels since December vs. SEK. Whatever the ECB says tomorrow, expectations are that Norges Bank and Riksbank, which will also update policy, may have to pedal forward guidance faster into accommodative territory