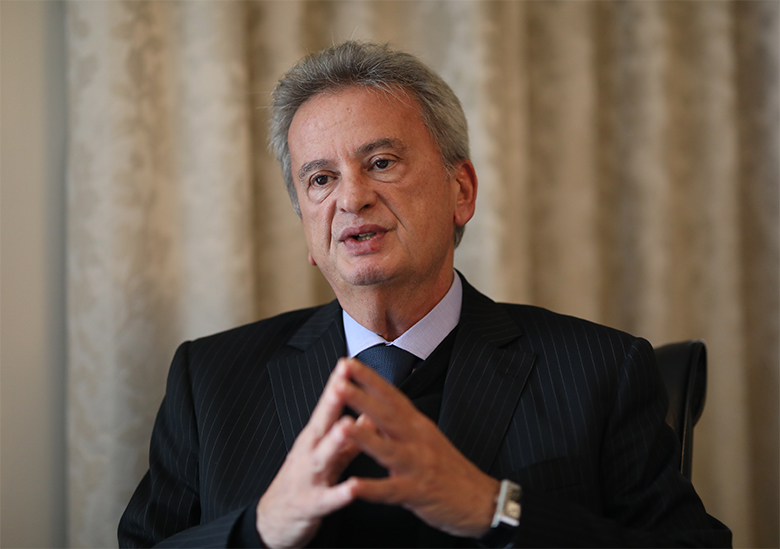 Lebanon’s emergency plans to stave off imminent default will have the full support of the Banque du Liban, its governor Riad Salamé told Euromoney at the IMF meetings in Washington on October 19. But real commitment to reform is needed to unlock an $11 billion funding package and the private sector investment that will prompt a true recovery in Lebanon.

Countrywide protests, which began on October 17 after the government revealed plans to charge a fee on WhatsApp calls, showed little sign of abating by Wednesday 23, even after the government unveiled a plan to stimulate growth and reduce Lebanon’s deficit without resorting to more taxes.

But despite the ongoing protests and calls by analysts that Lebanon’s package comes as too little, too late to save its ailing economy, Salamé stresses that the country has options.

Successful implementation of reforms in the electricity sector, on which the government spends 4% of Lebanon’s GDP, will bring down the deficit to zero in three years as well as unlocking access to an $11 billion funding package agreed in Paris last year, Salamé says.

The government is also considering sectors for privatization as well as putting in place laws to deter corruption, all without raising taxes on the population, although banks will be taxed more heavily.

The Banque du Liban will “back the government to reach the deficit of near zero,” says Salamé, but he stresses it was reform and not the funds that will save Lebanon.

“These funds will not solve the financial situation of the country but it will allow the county to modernize and develop its infrastructure and to lay the ground for obtainable growth.”

Lebanon is running out of time, and money, to save itself from default. With one of the highest debt-to-GDP ratios in the world at 140% and enormous twin deficits, a crunch point is approaching fast – as of June, the government had an estimated $16.5 billion (around 30% of GDP) of debt maturing by the end of 2020, according to Capital Economics. But analysts are unconvinced that there is the political will or ability to enact change.

“The sectarian system delivered peace but it wasn’t fit for purpose for the economy. The country has too much debt, the currency is overvalued, and the banking sector doesn’t work.”

The country has been on the brink before, but has relied on loans from its Middle Eastern neighbours, as well as support from its banking system, bolstered by remittances from a wealthy diaspora.

But tightening global financial conditions, reports of outflows from the country’s banking sector, and the fact that Lebanon’s donors have not yet come forward, suggest that default is now likely.

“Even the optimists wouldn’t say they have longer than a year, and it is rapidly narrowing,” says Ash. “There needs to be massive belt tightening, massive austerity and no one wants to do it.”

The Banque du Liban is expected to take a central role in supporting the government, particularly after reports that the government’s plans to cut its debt servicing costs will not include eurobond holders.

In order to ease this repayment burden, the bank has drawn up a plan to offer the government a reduction on interest payments paid on its Treasury bonds, a senior banker tells Euromoney.

Critics call the measures “creative accounting”, and say that by moving the losses from the ministry of finance to the central bank, the government is simply delaying the problem.

The bank will back the government to reach a deficit of near zero percent, Salamé tells Euromoney, though he makes no mention of the plan to accept lower interest payments.

“[The plan] means that the government will not have to borrow money this year from the markets, and will have the time to implement the reforms, especially in the electricity sector, which are vital to the economy,” he says.

[The plan] means that the government will not have to borrow money this year from the markets, and will have the time to implement the reforms, which are vital to the economy

He reports that the bank is developing “non-conventional” initiatives, such as providing a subsidy on the interest rates for investments in “productive sectors”, the environment and energy savings.

But analysts warn that the central bank cannot continue to prop up the economy. Reports of deposit outflows have spooked investors, while Moody’s warned the central bank only has $6–$10 billion in useable dollars left to maintain stability.

BlueBay’s Ash warns that these unconventional measures, which in the past have included various swap schemes to help the government meet its obligations, have eroded the real value and competitiveness of the Lebanese pound, and eroded Banque de Liban’s net FX reserve position.

Salamé tells Euromoney the bank has “enough reserves” despite being down for the year by $1.5 billion. Overall, FX reserves are around $38 billion excluding gold, which is valued at $14 billion, he says.

“We have presently enough reserves and if you take it compared to GDP, we have maybe the highest ratio of reserves against GDP in the non-oil countries of the MENA region.”

Lebanon’s banking sector is also expected to shoulder some of the burden, though investors warn that reserves are dwindling as the Lebanese diaspora suffers amid the slowdown in global growth.

The sector will contribute 5.1 trillion Lebanese pounds ($3.4 billion) to deficit reduction, including through an increase in the tax on bank profits, prime minister Saad Hariri has said.

But the tightening global financial conditions and reports of outflows from the country’s banking sector suggest that banks too may find it more difficult to bolster the country’s finances.

The banking sector has been in deleveraging mode, with total deposits declining by $1.8 billion between the end of 2018 and August 2019, but this has been largely offset by the $7.5 billion decline in outstanding loans, he says, adding that: “Liquidity has in fact increased.”

Lebanon still intends to access the capital markets for funding, though with appetite from international investors muted, the onus may fall on the country’s banking sector to absorb the issue.

The government has mandated Blombank, Citi, Societe Generale and Standard Chartered to lead a bond transaction in November, according to a source close to the deal.

The cost of insuring five-year Lebanese debt has widened 113 basis points in the past week, according to IHS Markit, while yields on its 10-year dollar-denominated sovereign bond were at 13.2%.

The government will try to sell the deal to international investors, the source says, but will use the banks as a backstop to secure funding if there is little appetite.

With the bonds trading at a cash price of 62-65, a London-based emerging market portfolio manager says Lebanon would have to pay over 127% for a new deal.

“This wouldn’t be for the faint-hearted investor and I’d be surprised to see a lot of demand given the backdrop and risk/reward of investing in a new issue,” he says.

In the past, Lebanon has relied on handouts from its wealthy Gulf neighbours, but recent visits to Saudi Arabia and Abu Dhabi have not yielded firm financial commitments.

“As the influence of Hezbollah has extended in Lebanon, Gulf countries have proven less willing to provide bilateral loans/financing to Lebanon ‒ preferring to hold this financing back to pressurize successive governments to counter the rise of Hezbollah and Iran in Lebanon,” Ash wrote in a note on Tuesday.

Nevertheless, Salamé says the private sector in the Gulf will support Lebanon’s infrastructure projects, saying that commitments were given at a recent visit by Hariri to Abu Dhabi.

“GCC countries have their own public funds, and historically they have supported Lebanon,” he says. “The Gulf has maintained a good relationship.”

“It is not just about funds deposited with the central bank or loans given to the government for budget purposes,” he adds. “There is a large diaspora contributing to Gulf economies, and trade is continuing. This shows the relationship with the Gulf is continuing.”