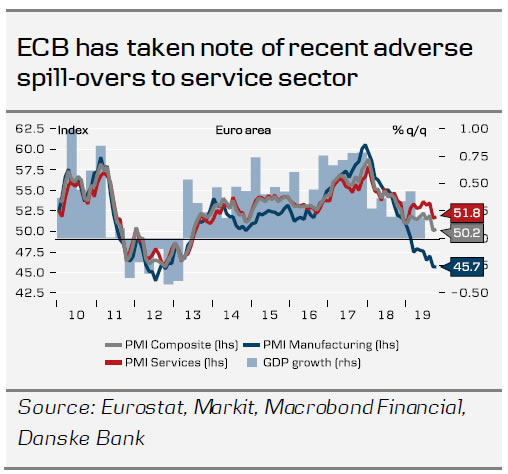 Technical questions, with one answer

The most interesting parts of the press conference were expected to be on the ISIN limits and the tiering. Tiering questions weren’t addressed, but Draghi had one important message: the ISIN limits are self-imposed, which also suggests that limits could be changed at their discretion. The ECB does not see any restrictions arising on bond purchases for ‘quite a bit of time’ (they are ‘reasonable assumptions’ behind the calculations). All things equal, this supports our view of further spread compression in semi-core and periphery vs. core / swaps.

We were left very disappointed with no questions or reflections on the potential to cut rates further or where the reversal rate would be. Markets do not even point to a full 10bp rate cut.

Unsurprisingly, other policy areas, in particular growth friendly fiscal policies, should be enacted. We note that Draghi alluded to a way out of the low interest rate environment is higher fiscal spending as one of his repetitive calls for other policy areas to act. The word fiscal was mentioned five times in the introductory statement, similar to previous meetings.

Overall, the ECB’s assessment of the inflation and growth outlook has not changed much since the September meeting. Draghi continued to reiterate downside risks to growth and a concern with too low inflation in the euro area, while still referring to tight labour markets as the most positive aspect of the current macro environment. However, the October PMIs pointed to the weakest inflationary pressures in years and the recent service sector weakness does not point to a return to potential growth anytime soon. This view seems to be shared by the ECB, with moderate but positive growth expected to drag out into Q4.