Consolidations continue generally in the forex markets today, with the exception of notable strength in Canadian Dollar. The Loonie is so far the strongest one follow the week as helped by rebound in oil price. Dollar is currently following as second strongest but there is no committed follow through buying yet. On the other hand, Sterling is trading as the weakest one, taking other European majors lower.

Technically, there is still no convincing sign of Dollar rally yet. USD/CHF does finally break 0.9905 minor resistance firmly, and should be heading back to 1.0027. However, AUD/USD recovers after brief breach of 0.6810 minor support. EUR/USD is also held well above 1.1062 minor support. USD/JPY is held inside tight range below 108.93 temporary top. Traders may only make a decision next week.

EU27 is said to debate today the drafted text granting UK another Brexit delay . The purpose of the extension is “allowing for the finalization of the ratification” of the withdrawal agreement. There is no consensus on the date yet as some leaders prefer to idea of so called “flextension”. Meanwhile, some leaders might want to see the result of UK Prime Minister Boris Johnson’s early election motion first.

Johnson called for an early election on December 12 yesterday and the Commons is due to vote on that on Monday. He said in a letter to opposition leader Jeremy Corbyn that prolonging the Brexit “paralysis” into 2020 would have “dangerous consequences for businesses, jobs and for basic confidence in democratic institutions, already badly damaged by the behavior of parliament since the referendum”. Corbyn, on the other hand, repeated that “the principle is take ‘no deal’ off the table, the EU answers tomorrow, then we can decide.”

US Trade Representative Robert Lighthizer and Treasury Secretary Steven Mnuchin will speak with Chinese Vice Premier Liu He today by phone. Two sides are believed to be working on the text for Phase One of US-China trade agreement, for signing at the APEC summit in Chile on November 16-17.

It’s reported that China will ask US to drop the plan to impose tariffs on USD 156B of Chinese goods on December 15. Additionally, Beijing could ask US to remove the tranche of tariffs imposed on September 1, on USD 125B of Chinese imports, too. That is, China is seeking to get back to tariffs on just the original USD 250B in goods.

In exchange China would buy at least USD 20B of American farm products in the first year, as part of the phase one deal. That would bring purchases back to the level in 2017, before trade war began. In the second year of a final deal, purchases could rise further to USD 40B-50B, when all punitive tariffs are removed.

Germany Gfk consumer confidence dropped to 9.6 in November, down from 9.8 and missed expectation of 9.8. Ifo business climate will be featured in European session. Later in the day, US will release Michigan consumer sentiment.

Intraday bias in AUD/USD remains neutral with focus on 0.6810 resistance turned support. Firm break should indicate completion of corrective rebound from 0.6677. Intraday bias will be turned to the downside for 0.6723 support first. Break will target 0.6670 low. On the upside in case of another rise, upside should be limited by 0.6894 resistance to bring larger down trend resumption. However, firm break of 0.6894 will dampen our bearish view and turn focus back to 0.7082 key resistance. 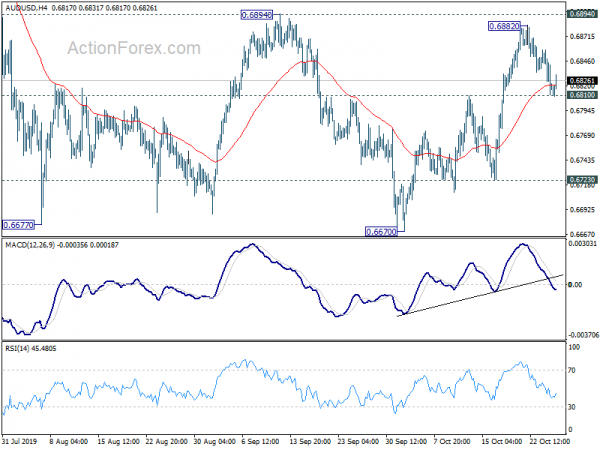 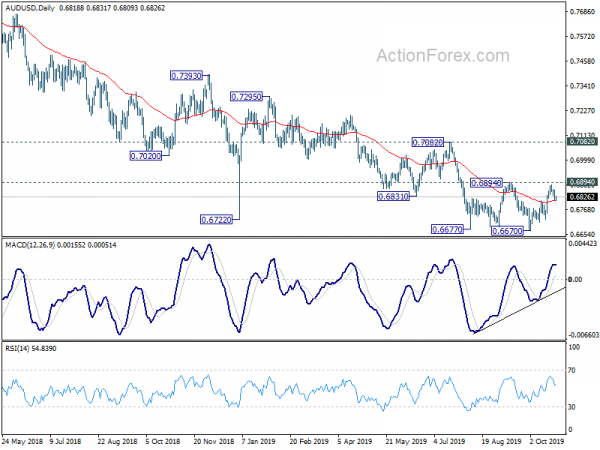