The impact of Hong Kong unrest on finance: not fear but inconvenience 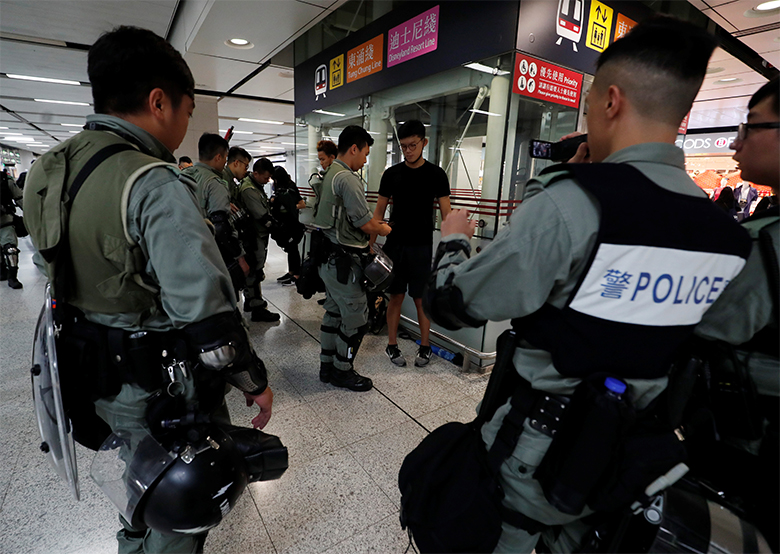 Extra security: a police patrol at MTR station on the lookout for protesters

A finance conference was canned in Hong Kong last week. It will be pushed back three months, and held in Macau instead. It wasn’t that anyone feared for their safety. It was a knock-on effect of the one true impact of civil unrest on Hong Kong business and finance so far: inconvenience.

You don’t get caught up in petrol bombs and iron bars in Hong Kong unless you’re either very unlucky or decide to take too close a look at the action. During the day, life goes on pretty much as it always has, just with incongruous graffiti around the base of the Bank of China building, some smashed ATMs belonging to the mainland banks and unfamiliar security around places such as the legislative council.

Instead, here’s how unrest impacts your life in finance today.

You don’t fly on weekends, or indeed any time after midday on Friday, because that’s when the most disruption takes place and you can’t count on the Airport Express running or the airport itself being free of protest. You allow longer anyway, to deal with the extra security checks in order to enter the airport.

When you fly back in, you no longer do it on an evening flight, because these days the MTR public transit system is shut much earlier in the evening, and that has a knock-on effect on the availability of taxis at Hong Kong station.

You don’t propose a conference, or any big gathering in Hong Kong, because the compliance and safety people at your overseas clients and colleagues’ operations are advising against travel to Hong Kong, and since everything here is international – at the abandoned conference, 54% of the audience was expected to be flying in – you just can’t run an event with any confidence that people will turn up.

The hotels are hurting, and so is Cathay Pacific.

The upside is that you know that if your colleagues fly in they’ll at least get a cheap hotel and an empty flight.

You’ve had to set up a policy for your staff so they can work from home if they feel threatened. For those who don’t, the commute has become painful from the heartland stations, where expats don’t tend to reside: Tung Chung, Lai King, Kowloon Tong.

Even in Wanchai, it’s a challenge to find a functioning ticket machine, not that locals need to use them.

Sometimes that low-key mood is to be encouraged. If you, like many banks, have a mixture of Hong Kong and mainland staff, you dread the protests coming on the office TV screens.

The best outcome you can hope for is that nobody talks about it. But that’s not ideal either, nor sustainable.

There are numbers around about capital flight; a Goldman Sachs report in early October said that $3 billion to $4 billion of deposits might have moved to Singapore from Hong Kong over the summer. But none of that is yet important.

The impact instead is in restaurants and retail, tourism and events. And if regular visitor numbers from elsewhere in the region are down, that’s nothing compared with the sudden absence of mainland arrivals.

There is tension, for sure, with mild and varied opinions erupting into heated disagreements among colleagues and even friends.

There are flare-ups: a mainland Chinese JPMorgan banker was punched by a protestor after shouting “We are all Chinese” in Mandarin.

Businesses suchas HSBC find themselves in an impossible situation no matter what they do or say. The old-guard tycoons – and their legitimacy – are questioned now like never before.

There is little certainty about how the unrest can be resolved peacefully.

In the banking and finance towers of Central, Admiralty and Kowloon, business goes on, not throttled, just inconvenienced.

It’s bearable, for now. But another year of cancelled conferences and disrupted business travel will start to undermine Hong Kong’s viability as a financial hub.