The Weekly Bottom Line: Liberals Return to Ottawa with a Minority Parliament 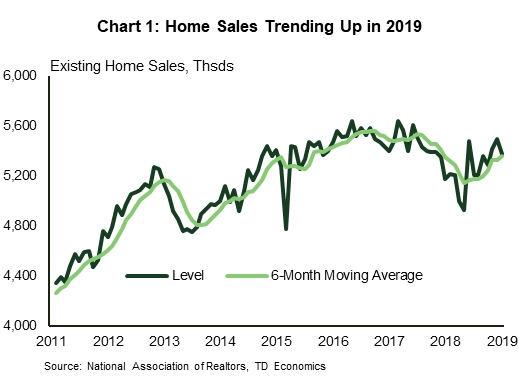 U.S. markets were in the black this week with limited economic news to digest, but there was plenty of action across the pond. European Central Bank President Mario Draghi made his last monetary policy announcement before handing the reins over to Christine Lagarde. Draghi left monetary policy unchanged, after easing last month, calling on governments in Europe to undertake more fiscal stimulus to kick start the continent’s moribund growth. Lagarde will need to use her powers of persuasion on that front too, as monetary policy in Europe is increasingly running out of room to stimulate the economy.

Meanwhile in the UK, Brexit continued to take one step forward, two steps back this week. Parliament agreed to a second reading of the Brexit bill, but progress is on hold at least until Monday. That is when the UK will vote on whether an election will be held on December 12th, and also when the EU will decide on the length of the extension it will grant the UK to avoid a no deal exit on October 31st.

The U.S. data was second tier; but, it still had some interesting updates on recent economic trends. The housing sector has been closely watched in recent months for signs that the drop in mortgage rates has sparked demand. Existing home sales fell 2.2% in September, with declines seen across all regions. However, zooming out on the monthly volatility, sales have been trending upwards through 2019, after a notable downturn in the latter half of last year (Chart 1). Tight inventories have been a constraint on sales, and have pushed prices higher. The median existing home price was up 5.9% in September from the year-ago level – up from 5.0% in August (and 3.6% as recently as April).

September’s durable goods orders provided an update on the struggling manufacturing sector and signals on business investment. Orders were disappointing, falling 1.1% after three months of gains. This adds to the negative picture already painted by September’s ISM Manufacturing Index. It likely means a larger decline in equipment spending in Q3 than we expected at the time of our last forecast, and provides a weak handoff to Q4. The October ISM index will be released next Friday, and will be closely watched for signs of stabilization in the sector.

Next Wednesday we will also find out how much growth slowed in the third quarter. We are tracking a modest 1.4% pace, down from 2% in the second. Most major components of the economy are on track to slow from the second to third quarter, with the notable exception of residential investment. The recent upturn in housing is expected to see residential investment rebound over 5% annualized, after six-straight quarters of declines.

The main event next week is the Fed rate decision. Markets widely expect another quarter-point cut, taking the upper limit of the funds rate to 1.75%. This will make it three cuts in as many months. The question is, is it three cuts, they’re out? Or will the Fed need to continue to ease? The fact that the inversion in the yield curve has subsided over the past couple of weeks (Chart 2) is a positive sign that markets are no longer pricing in a recession, and now believe the Fed may have eased enough to offset the slowdown in global growth that has taken hold in 2019.

Canada – Liberals Return to Ottawa with a Minority Parliament

Dominating headlines this week was Justin Trudeau’s Liberals holding onto power in Monday’s election, albeit without a majority in parliament, and with a marked regional split in performance. As noted in our post-election analysis, there are a great deal of unknowns at this point around what parts of the Liberal platform will be kept, modified, or dropped, and what initiatives from other parties may be adapted to survive confidence votes in the coming months.

Some assumptions can be made. First, PM Trudeau pledged in his first post-election press conference to make changes to the tax system (increasing the tax-free earning threshold) his first order of business. All parties had measures to support near-term housing affordability in their platforms – some action on this front also seems like a safe bet. Wider deficits also look like a lock; the Liberal platform anticipated roughly $9bn more in annual borrowing by fiscal 2023 (Table 1) – sweeteners to garner support from other parties are likely to send these figures higher. However, the risk of tax increases elsewhere to support some of the ‘spendier’ measures that have been batted around cannot be dismissed (the NDP platform included an increase in the capital gains inclusion rate, for instance).

Another big post-election question is around the future of the Trans Mountain Pipeline (TMX) expansion. There are some reasons for cautious optimism. First, as it stands today, there is no need to put anything TMX-related to a vote (it is possible that court cases could change this). Second, the other parties have softened their views of late, with Bloc Québécois leader Yves-François Blanchet stating (in effect) that he is not too concerned with pipelines outside of his province’s borders. Should optimism on this file prove misplaced, however, expect investor sentiment around the energy sector to sour further.

Away from political developments, the economic data this week was generally positive. Construction investment rose again in July on a relatively broad sectoral base. Beneath a negative retail sales headline lay a modest (+0.2% m/m) gain in volumes. This was in effect ‘more of the same’ from a sector that has struggled to generate meaningful growth for some time now.

Perhaps more interesting was the resilience on display in the Bank of Canada’s Autumn Business Outlook Survey. Despite being polled over the late summer, those surveyed painted a decent picture of the economic outlook. Opinions on the outlook for sales and investment held up (Chart 1), helping send the overall indicator slightly higher – although a stark east/west divide was evident. To be sure, the survey isn’t suggesting that the Canadian economy is about to set the world on fire; trend-like growth is the implication. But, all things considered, it could have been a lot worse.

Putting it all together, Bank of Canada Governor Stephen Poloz is probably reasonably happy going into next week’s interest rate decision and forecast update. Despite increased global uncertainty, Canada has so far managed to eke out continued trend-like growth. Some of these trends (like retail spending) are soft, but that isn’t anything new. Given no ‘bends at the end of the trends’ yet, Governor Poloz will be happy to leave the policy rate unchanged on Wednesday, if not through the remainder of the year.

We expect the Fed to lower rates by 25 basis points next week, delivering the third consecutive rate cut since July. The FOMC is likely to communicate patience in deciding future policy moves after next week’s cut as they assess the impact of the three cuts they have already delivered. We don’t anticipate any further rate cuts this year, but that could quickly change if the U.S. economy shows further meaningful signs of deterioration.

We are tracking a soft 1.4% annualized pace for GDP growth in the third quarter, down from 2% in the second. Most major components of growth are on track to slow from the second to third quarter, with the notable exception of residential investment. An upturn in the housing market should see residential investment rebound 5.6% after six straight quarters of declines. Consumer spending should be a key support to growth (+2.7%), while business investment is expected to contract (-3.8%) for the second consecutive quarter.

We look for a rebound in the ISM index to 49.5 in October after its large and unexpected drop further into contractionary territory in September, as we expect easing trade tensions to have marginally boosted business sentiment during the month. The average of the ISM-adjusted regional surveys is also pointing to some improvement since September. In addition, firmer US Markit and China PMI data also boost the odds for a positive surprise, in our view.

We expect payrolls to increase by a small 70k in October, following the on-consensus 136k August print. Jobs in the goods sector will be negative largely reflecting GM’s strike and its spillovers to auto suppliers, which should shave-off around 70k from manufacturing payrolls. Separately, we look for a modest rebound in services employment partly due to a recovery in job gains in the education sector. We also note that temporary census hiring for canvassing purposes likely helped to boost employment figures this month: we pencil in a 15k increase in federal hires. All in, the household survey should show the unemployment rate ticked up to 3.6% in October, while wages are expected to rise 0.2% m/m, lifting the annual rate a tenth to 3.0% y/y.

The Bank of Canada is widely expected to keep rates unchanged at 1.75% during the October policy meeting, where updated economic projections will balance a better-than-expected 2019 with modest downgrades to the 2020 outlook. Q2 GDP and Q3 CPI came in well above projections from the previous MPR, but the global backdrop has softened since July which will weigh on next year’s GDP forecast. The policy statement should maintain a similar tone to September, with forward looking language focused on the global outlook and trade uncertainty.

Industry-level GDP is forecast to rise by 0.1% in August, helped by stronger services and a partial rebound in the goods producing sector. Goods output fell by 0.8% in July, largely due to an offshore oil spill that shuttered production in the region. Those shutdowns have persisted into August, but strong construction investment and manufacturing activity should help drive a modest increase for the goods sector. Meanwhile, services will benefit from continued strength in the housing market and a modest increase in retail trade, offset by softer wholesale activity. Other industries, such as health care & education, saw an outsized increase in hours worked during August which also bodes well for real activity. A 0.1% increase for August would leave Q1 tracking slightly below 1.5%, in line with BoC estimates from July.