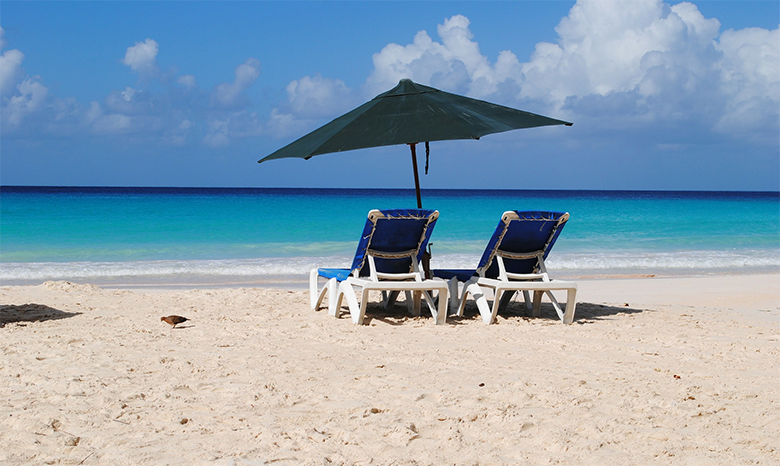 Contrast that with declining scores for Brazil, Chile, Colombia, Mexico and Venezuela, and it becomes increasingly perplexing why investors seeking to manage their risks would not seek out the Caribbean’s better-balanced alternatives.

That’s not to say all Caribbean borrowers are less risky. Far from it. Only two countries (Trinidad & Tobago and Bermuda) rack up a score of at least 50 points out of a possible 100 in Euromoney’s country risk survey. Compare that with eight in Latin America.

But the direction of change is quite telling when considering the region’s total unweighted average risk score is now at its highest since 2010, with Barbados, Jamaica and St. Lucia the stand-outs, showing impressive rising score trends over five years:

Take Barbados, which “continues to make good progress in implementing its ambitious and comprehensive economic reform programme,” according to the IMF following its latest staff visit to the island in September.

The country was shocked by the global financial crisi, and drowning in debt when Mia Mottley’s Barbados Labour Party won a landslide at the elections in May last year. The island’s first female prime minister was forced to seek the IMF’s assistance for an emergency plan to deal with the crisis.

GDP growth remains non-existent, and there is always the constant risk of a weather-related catastrophe in the region, as The Bahamas was unfortunately reminded of when it succumbed to a direct hit from hurricane Dorian in August.

It is now 69th out of 186 countries, sandwiched between Paraguay (below) and Panama in Euromoney’s global risk rankings. That puts tier-4 Barbados only one step away from tier 3, a medium-risk category – one of five that Euromoney uses to separate countries according to their relative risks.

One of Euromoney’s Caribbean survey contributors is Winston Moore, a professor and deputy principal at the University of the West Indies. He is decidedly more upbeat about the region, and Barbados in particular, noting that it has successfully concluded a domestic debt restructuring programme.

“This has significantly reduced interest costs for the government and has helped to move the fiscal position of the government closer to its target for the primary balance. In the last press release of the Central Bank of Barbados, the primary surplus was 3.5% of GDP for fiscal year 2018/19 and the government has introduced a number of new tax measures to target a fiscal surplus of 6% of GDP in 2019/20.

“There have been some expenditure cuts as well, mainly in the area of public-sector employment, but additional measures to streamline government operations might be needed.”

He goes on to say: “The island has begun to rebuild its stock of international reserves, an important indicator of the sustainability of the exchange rate peg, and these reserves are now estimated at more than 15 weeks, well above the 12 weeks target.”

…all the way to Kingston

Jamaica is still a riskier option than Barbados, but has also improved more than other Caribbean countries in Euromoney’s survey, climbing to 94th, and pushing further up tier 4 to move alongside Azerbaijan and Jordan in the global rankings.

The IMF has similarly positive things to say about the government’s record when it completed its review in September, stating: “The authorities’ exemplary programme implementation has resulted in a stronger economy with significant reduction in vulnerabilities, and increased job creation.”

Euromoney’s survey would appear to endorse that fact with an across-the-board improvement to all five economic risk indicators this year.

“Taxes have been reduced, inflation and the external current account deficits are low, and the level of foreign currency reserves is comfortable at about $3.5 billion,” the IMF proclaims among other positive features.

Professor Moore is equally upbeat: “Jamaica has seen significant benefits emerging from the implementation of the IMF-supported reform programme. In particular, unemployment is now at an all-time low, and there has been a significant improvement in the level of business confidence in the country.

“Economic growth has also picked up in recent months, largely due to expansions in mining, construction and tourism, while the fiscal authorities have also shifted the tax base, which has helped to boost fiscal revenues and improve the overall fiscal deficit.”

And that would give some scope for a credit rating upgrade, given that Fitch is still awarding Jamaica a B, one notch below the B+ from Standard & Poor’s, with the Moody’s equivalent two notches below, especially since Jordan – one place below in Euromoney’s survey – receives a higher Fitch rating of BB-.

The survey also suggests that Barbados, despite its debt, should qualify for a higher rating. True, neither country is investment grade, but nor are they as risky as the credit rating agencies claim.