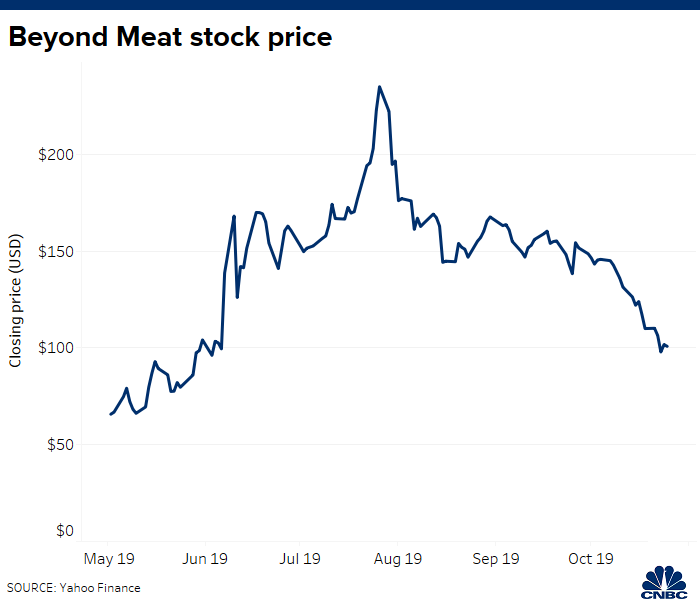 Ethan Brown, founder and chief executive officer of Beyond Meat Inc., speaks during the company’s initial public offering (IPO) at the Nasdaq MarketSite in New York, U.S., on Thursday, May 2, 2019.

Wall Street was largely bullish on Beyond Meat after the alternative meat producer reported a much bigger profit than expected, but they warned the fundamentals may not matter right now for the once red-hot initial public offering.

Tuesday is the first time since the IPO that insiders can sell the stock, which could cause short-term pressure, analysts warned. Roughly 75% to 80% of the outstanding stock is available to trade following the lockup expiration.

The shares plunged 20% to around $85 as investors anticipated a wave of insider selling. At that price, the stock would be down 65% from its record intraday high of $239.71 in July as the alternative meat hype reached a fever pitch.

“Much depends on the amount of selling pressure over the next few days,” said J.P. Morgan’s Ken Goldman in a note to clients where he raised his earnings estimates for the next two years and kept his overweight rating.

“Putting the lockup expiry in the past ultimately should incent some investors to start buying the stock again, though the shares could fade lower beforehand,” Goldman warned.

Typically, founders, employees and early private investors who buy into a company before it goes public are restricted from selling for between 90 and 180 days. This is called a lockup period, which can cause a flood of insider selling and pressure the stock.

“Despite solid results the likelihood of early stage investors cashing out on a stock which is still up about 4x since its IPO, remains a drag in coming trading sessions,” said Barclays analyst Benjamin Theurer in a note to clients Tuesday.

Despite Tuesday’s sell-off Beyond Meat shares are still up more than 230% since its IPO in May. Despite the pressure the stock is seeing right now, Beyond Meat is a success story, reaching profitability by its third earnings report at a time when IPOs are being scrutinized for their lack of a bottom line.

Beyond Meat, which has a market value of about $6.4 billion, on Monday topped analysts’ expectations for its fiscal third-quarter earnings and revenue.The company reported earnings of 6 cents on revenue of $92 million, while analysts forecast earnings of 3 cents on revenue of $82.2 million, according to Refinitiv. The company saw sales grow across both its grocery and restaurant divisions, as its meatless meats drew in more customers and kept existing customers coming back.

“In terms of profitability, the company posted a solid gross margin expansion, supported by the greater operating leverage and productivity efficiencies, as well as the fresh platform, which generates higher levels of profitability,” said Theurer.

Beyond also raised its full year 2019 outlook for revenue. It now expects revenue in a range of $265 million to $275 million, up from a prior forecast of more than $240 million. Many analysts on Wall Street said fourth-quarter guidance is too conservative.

Beyond Meat’s CEO Ethan Brown said he is not touching his shares after the lockup and is focused on growing Beyond Meat to a $40 billion company in terms of revenue.

“For employees its certainty around their person circumstances that they have, if they just need liquidity,” Brown told CNBC’s “Squawk Box.” “I think the early investors its the investor mandate, what does their firm require them to do?”

—with reporting from CNBC’s Dominic Chu and Michael Bloom.