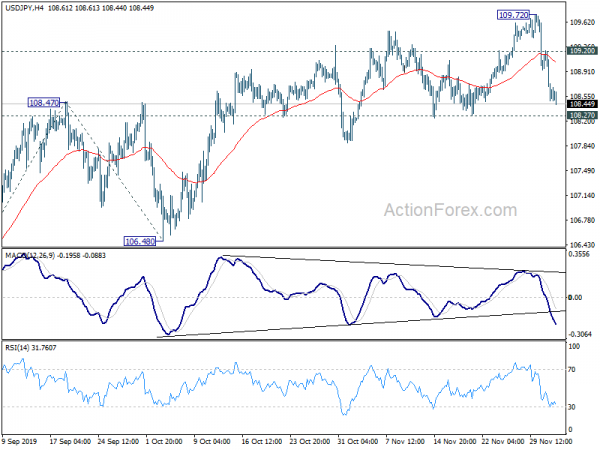 Markets turn into deep risk averse mode on concerns over US-China relations. . It’s not getting more unlikely that the phase one trade deal would be agreed in time to avert tariff escalation on December 15. Political tensions also intensified after House passed the the Uighur Act, just a week after the Hong Kong Human Rights and Democracy Act was signed into law. Yen finally rides on risk aversion and surges across the board. Meanwhile, Australian and New Zealand Dollars are the weakest for today so far, with Aussie additionally pressured by GDP miss. Canadian Dollar is mixed, awaiting BoC rate decision.

Technically, EUR/USD’s rebound this week is still kept below 1.1097 resistance. Bearish near term outlook is maintained for another fall through 1.0981. But break of 1.1097 will pave the way back to 1.1709 high. EUR/AUD’s rebound, on the other hand, neutralized the original bearish view and turned focus back to 1.6323 resistance. But EUR/JPY’s break of 121.01 minor support yesterday suggests completion of rebound from 119.24 and turn focus back to this low. The common currency is pretty mixed!

US Ross: No big trade meetings with China, no deal signing scheduled

Risk aversion dominates the Asian markets following the steep decline in US overnight. Renewed concerns over US-China trade negotiations were the main driver behind the bearish moves. It’s not getting more unlikely that the phase one trade deal would be agreed in time to avert tariff escalation on December 15. That’s a big step back in expectations given that investors were hoping for some tariffs rollbacks just weeks ago.

US Commerce Secretary Wilbur Ross told CNBC yesterday that no high-level trade talks are scheduled before December 15. He said, “there’s no big meetings scheduled right now, and there certainly is no signing date scheduled.” He also noted that waiting until 2020 election to strike a trade deal would take away China’s ability to pressure the US.

“That takes off the table something that they may think gives them some leverage. Because once the election occurs… and he’s back in, now that’s no longer a distraction that can detract from our negotiating position,” Ross said. He also emphasized that “the president’s objective always has been to get the right deal independently of when or anything else like that. So his objectives haven’t changed. And if we don’t have a deal, he’s perfectly happy to continue with the tariffs as we have.”

His comment came just after President Trump said that “I have no deadline, no,” regarding the trade agreement phase one. “In some ways, I like the idea of waiting until after the election for the China deal. But they want to make a deal now, and we’ll see whether or not the deal’s going to be right; it’s got to be right.”

Politically, tensions between US and China will also likely intensify after House of Representatives on Tuesday overwhelmingly pass a bill to toughen the response to China’s crackdown on Uyghurs in Xijiang. The Uighur Act of 2019, passed by 407-1, was step up to the Senate version passed back in September. The bill requires the President to condemn abuses against Muslims and call for the closure of mass detention camps in the northwestern region of Xinjiang. It also calls for sanctions against senior Chinese officials who it says are responsible. Just last week, Trump signed the Hong Kong Human Rights and Democracy Act into law. Both drew fierce objections from China.

Australia GDP grew 0.4% qoq in Q3, down from Q2’s 0.6% qoq, missed expectation of 0.5% qoq. The economy grew 1.7% through the year. The set of data, in particular weak consumption, argued that the impacts of rate cuts and fiscal stimulus were rather limited. They also raised questions on RBA’s view that the economy is reaching a “gentle turning point”.

Chief Economist for the ABS, Bruce Hockman, said: “The economy has continued to grow, however the rate of growth remains well below the long run average. The reduction to tax payable did not translate to a rise in discretionary spending, which led to a visible impact to household saving”.

Also from Australia, AiG performance of Services Index dropped to 53.7 in November, down from 54.2.

China Caixin PMI Services rose to 53.5 in November, up from 51.1, beat expectation of 51.2. PMI Composite rose to 53.2, up from 52.0, highest in 21 months. Markit said that both manufacturers and services providers see solid increases in output. Overall inflationary pressures remain weak.

Zhengsheng Zhong, Director of Macroeconomic Analysis at CEBM Group said: “China’s economy continued to recover in November, as domestic and foreign demand both improved. But business confidence remained subdued, reflecting the impact from uncertainties generated by the China-U.S. trade conflicts. That will restrain a recovery in economic growth. The trade dispute is the major reason behind the slowing economic growth this year, and will become a key factor affecting the stabilization and recovery of China’s economy next year.”

Looking ahead – BoC to stand pat, US ISM services and ADP watched

BoC rate decision is the main focus today. Governor Stephen Poloz indicated on November 21 that the monetary policy will stay unchanged in December. He noted that the current monetary condition is “quite stimulative” and is “about right given the situation”. While noting the economy remains in good shape, Poloz also warned of the uncertainty about trade. BoC is likely to reiterate the possibility of an “insurance cut” in coming months, as uncertainty of trade war persists.

USD//JPY’s pull back from 109.72 short term top is still in progress with focus on 108.27 support. As long as this support holds, rise form 104.45 remains mildly in favor to resume. On the upside, above 109.20 minor resistance will bring retest of 109.72 resistance first. However, firm break of 108.27 will indicate near term reversal and turn outlook bearish for 106.48 support.

Previous: AUD/USD Showing Signs Of Further Upside
Next: How capital markets got here and where they might be going