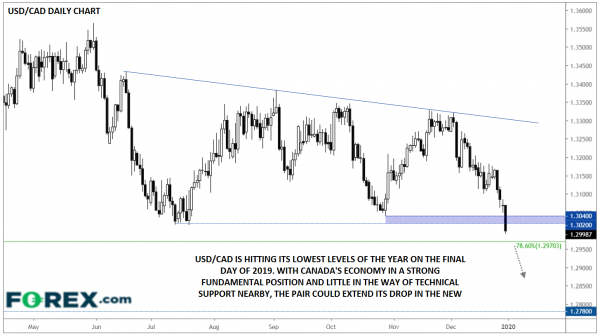 As we noted yesterday, this time of year is notorious for low-liquidity trading, and more often than not, lackluster markets as traders plan their New Year’s celebrations.

One currency that’s bucking that trend is the Canadian dollar, which is ringing 2020 in style. Shrugging off today’s weakness in oil prices, the loonie just hit a 14-month high against its rival to the south (this is shown as a 14-month low in the USD/CAD exchange rate). While a bit of month- and quarter-end selling in the greenback is playing a role, the Canadian dollar is nonetheless the second strongest major currency on the day behind the pound sterling. From a fundamental perspective, the Canadian economy is poised to benefit from a potential reacceleration in global growth in 2020 driven by a truce in the US-China trade war, as well as the Bank of Canada’s relatively “high” interest rate of 1.75% (although the central bank may be considering a cut at some point next year).

Technically speaking, USD/CAD is in the midst of breakdown below previous support in the 1.3020-40 band. Beyond the potentially minor 78.6% Fibonacci retracement of the Q4 2018 rally at 1.2970, there’s little in the way of logical support levels until the October 2018 low near 1.2800. In other words, today’s breakdown, if sustained, could have much further to run as traders flip their calendars to 2020.