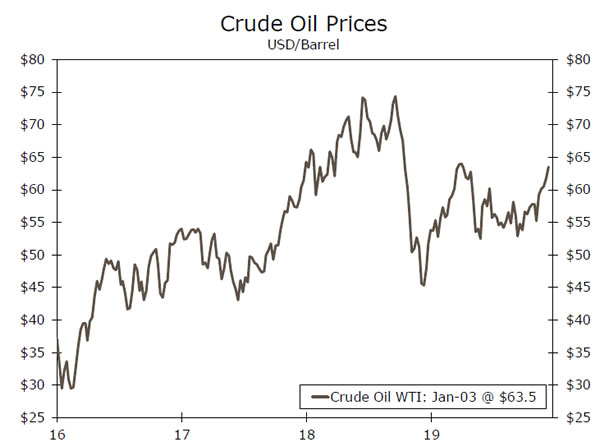 There were two notable geopolitical developments that grasped markets attention this week. First, President Trump announced that the Phase I trade deal with China will be signed in the White House on January 15, which should provide its detailed terms. Second, and more prominent, Trump ordered an airstrike in Iraq that resulted in the killing of Qassem Soleimani, one of Iran’s top military generals. Oil prices jumped and Treasury yields fell on the news. The largest macro concern beyond yet more geopolitical uncertainty is the lasting impact to oil prices, which will depend on if/how Iran responds.

Turning back to trade—while the Phase I deal was officially announced on December 13, this week’s statement of its forthcoming signing was seen as more than a formality for markets. Rumblings of a possible Phase I deal have been anticipated for months, but the actual passage of the deal exemplifies the first true de-escalation in the trade war. The deal slashed tariffs in half on approximately $120B of imports from China and dismissed the 15% tariff on an additional $156B, which was set to go into effect just days after being announced. On January 15, we expect to receive more detailed terms of the deal.

While the deal should certainly provide some lift to confidence, with approximately 70% of imports from China still exposed to tariffs a resurgence in business activity remains unlikely. Indeed, consumer and business optimism wobbled last year, not just due to additional tariffs being levied but as a result of the unpredictable nature of the trade environment. The Phase I deal is a step in the right direction, but does not provide solace to manufacturers who may still be exposed to tariffs or now recognize tariffs could be used as a geopolitical tool again in the future. As such, we expect investment spending to remain subdued this year.

The latest ISM manufacturing survey showed the ISM manufacturing index declined to 47.2 in December—the lowest since 2009. Various subcomponents of the index also plumbed lows that haven’t been touched in a decade. The trade war has certainly weighed on the sector, but the downward momentum in the ISM has been decidedly worse than other purchasing manager surveys. A continued de-escalation in trade tensions would be a welcome development for manufacturing. But, the temporary suspension of Boeings’ 737 MAX production is an additional headwind for the sector in the near-term.

Consumers’ confidence dipped in December, but at 126.5 the Conference Board index treaded modestly above its average monthly read of the year (126.2). Consumers were wary last year amid trade uncertainty and recession fears, but there is arguably some upside to confide