After an Impressive New-Year Rally, What Does 2020 Hold for Gold?

Gold has been on a tear lately, reaching heights not scaled since 2013 to temporarily breach the $1600 an ounce level. However, with risk appetite also riding high on the back of easing trade frictions, and US and Iranian tensions appearing to have been defused for now, what is keeping the popular safe haven at such elevated levels and can the rally be sustained in 2020?

Trade war and central bank easing have been positive for gold

The price of gold had been actively supported during 2019 by a number of ongoing uncertainties – primarily, the trade war and Brexit. Gold tends to benefit from increased geopolitical tensions or economic stress as investors flee into safe assets. A fresh round of monetary easing by central banks around the world also contributed to gold’s uptrend that picked up speed in late May before entering a consolidation phase in September. But towards the end of the year, as the global economic outlook started to brighten somewhat, it was dollar selling and year-end hedging that spurred the precious metal’s breakout from its bullish flag.

Gold closed 2019 with gains of 18% and after initially peaking at $1583/oz in early January, it received another shot in the arm when tensions flared in the Middle East, with the United States and Iran exchanging hostilities. The fear of an all-out war in the region drove the yellow metal to an almost 7-year high of $1611/oz on January 8. Those tensions have since de-escalated and while prices have retreated closer to $1550/oz, the medium-term outlook for gold remains fairly bullish.

So what is keeping gold in demand when the imminent threat of a conflict with Iran has receded, things are finally looking up on the trade front and there’s even positive progress with Brexit? One answer is none of those risks have completely dissipated.

Iran may have backed away from taking further retaliatory action against the US for the killing of its top military commander, but the region remains highly volatile and could easily escalate again. Geopolitical tensions are not confined to the Middle East, however. The ongoing protests in Hong Kong and the threat of new missile tests by North Korea add to the list of things that can go wrong in 2020.

Moreover, the trade war is far from resolved and with ‘phase one’ out of the way, the most crucial aspects of the trade dispute will be discussed in ‘phase two’ and could prove even more tumultuous. As for Brexit, the risk of a no-deal scenario will once again rear its ugly head at the end of 2020 as Britain pushes the EU for a swift trade deal.

A blow-up of one or more of those risks would endanger the fragile recovery of the global economy, which if the hit is substantial enough, it could force the US Federal Reserve and other central banks to once again increase monetary stimulus. Expectations of Fed rate cuts triggered the gold’s upsurge during the summer and there was a further boost at the end of 2019 when policymakers signalled rates are likely to stay on hold throughout 2020.

The Fed’s neutral stance has put a lid on Treasury yields, which have not rallied despite the improving prospects for global growth. Bond yields move negatively with gold prices as investors dump the precious metal in favour of higher yielding sovereign bonds when interest rates are rising, and vice versa. Any deterioration of the growth picture could further increase the attractiveness of gold if investors begin to reassess their expectations of policy easing by the Fed in 2020. 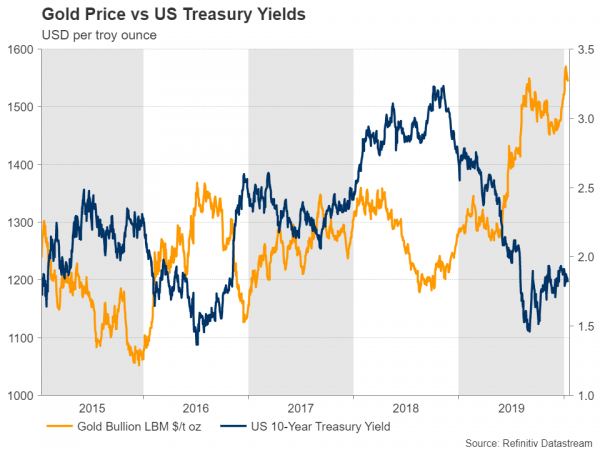 In the midst of the aforementioned risks, there has been another development that’s been boosting gold prices: de-dollarization. Over the past year, central banks have stepped up their diversification of