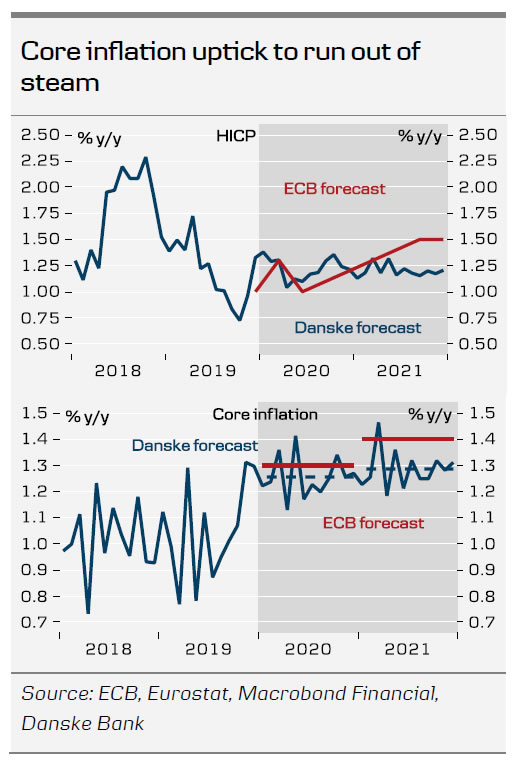 The thrust of the ECB meeting next week is expected to be the strategic review, on which we published a separate piece today, see 10 questions on the upcoming review.

We believe ECB’s overarching strategy should be to ensure robustness and flexibility in the objective and to keep the focus on its ability to guide end-users with a strong, credible, transparent commitment, but to acknowledge that some flexibility should be expected given the nature of steering inflation. We conclude that the ECB will decide to apply a symmetry with a potential tolerance band around the inflation target mid-point.

Media reported earlier this week that governing council members received a letter on the strategic review, which is to be announced on Thursday next week.

At the December meeting Lagarde already stressed initial signs of stabilisation in the economic momentum, with downside risks becoming less pronounced and a mild increase of underlying inflation pressures taking shape. This raises the question whether a change to a balanced growth risk assessment is warranted in January. Although we expect the mild cyclical recovery in Europe to continue in the coming months, data since the December meeting have been mixed (see Euro Area Macro Monitor: Ending the year on mixed signals, 9 January 2020). Especially a clear rebound in manufacturing activity and the battered German car sector remains elusive. Although things are slowly moving in the right direction, we think the ECB has nothing to gain from being proactive rather than waiting for more evidence that the nascent euro area recovery is strengthening, before moving to a balanced growth risk assessmentw. Should the data stay at current levels, including the inflation outlook, we see a solid case for the ECB changing its risk assessment in H1 20 (and potentially as early as the March meeting), together with the new staff projections.

In contrast to the still mixed economic picture, inflation prospects have brightened a bit since the last meeting. Core inflation has been on an uptrend since July and held steady at 1.3% for a second month in December. The acceleration in service price inflation materialized faster than we anticipated in Measuring the euro area inflation pulse, 29 November 2019, but the underlying dynamics – especially with respect to goods price inflation – remain unchanged and leave us sceptical that much more core inflation upside is in store (see chart). We forecast core inflation on average at 1.3% in both 2020 and 2021 (marginally lower than the ECB’s forecasts). While these levels in combination with a strengthening cyclical rebound could be enough to convince ECB policymakers to eventually drop the easing bias in H1 20, we doubt it will be enough to get the ECB back into tightening mode in the near future.

ECB caps downside risk in EUR/USD, but does not add upside

The euro area remains in a regime of low growth, accompanied by weak inflation dynamics and the baseline is essentially a continued relative underperformance of European financial assets. We do not view the possible change in communication as a game changer for spot EUR/USD.

Last time ECB officials tried to instil investor optimism in the euro area, EUR/USD went from near-parity to 1.20 in a matter of a few months. This time around, however, we think investor sentiment will be a lot more cautious and there is little to suggest one should rationally re-rate the euro area to be a 3%-growth region. Our 3M view continues to be steady at 1.11 but this shift in communication does somewhat limit downside risk to the forecast. The most notable upside risk to EUR/USD continues to be a substantial fiscal easing agenda making its way forward in the euro area but that remains somewhat elusive as of now.