BOC is likely to leave the policy rate unchanged at 1.75% at the meeting this week. While several macroeconomic data released since the December meeting surprised to the downside, it could take a few more months to confirm the trend. BOC also appears to have downplayed the downside risks of the data. Meanwhile, signing of US-China Phase I trade deal and approval of USMCA trade agreement by the US Congress have eliminated major uncertainties. We expect the risk of an insurance cut has been removed and future monetary policy would be data-dependent.

GDP growth surprisingly contracted -0.1% m/m in October, from +0.1% gain a month ago. The market had anticipated a flat reading. Apart from GDP growth, other indicators also pointed to a weaker-than-expected development in the last quarter of 2019. For instance, retail sales declined -1.2% m/m in October, following a flat reading in September. This has missed consensus of a +0.5% growth. The Ivey PMI plunged -8.1 points to 51.9, marginally staying in the expansionary territory. However, these disappointments could have been driven by transitory factors. Earlier this month, BOC governor Stephen Poloz suggested that the economy in 4Q19 could have been affected by unusual weather and strikes.

On the positive note, the job market remained resilient. The number of payrolls increased +35.2K in December, beating consensus of +25K and a -71.2K decline a month ago. The unemployment rate also dropped -0.3 percentage point to 5.6%. The latest business outlook survey signals a slight improvement in the business sentiment. The headline reading improved to +0.7 from +0.4 previously. On inflation, headline CPI improved to +2.2% y/y in November, from +1.9% a month ago. The core reading steadied at +1.9% for the month. BOC’s three preferred gauges averaged at +2.17%, up from +2.1% in October. December’s inflation report will be released on the same day as the BOC meeting. The market expects the headline CPI to have steadied at +2.2%. Other than economic developments, there are two events that have reduced BOC’s concerns. First, the US and China has eventually signed the Phase I trade deal. Second, the US Congress has approved the trilateral USMCA trade agreement. 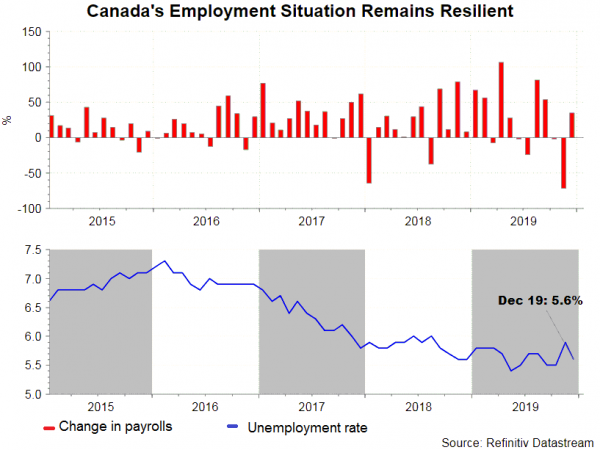 On the monetary policy stance, we expect BOC to reiterate that the current interest rate is appropriate and future decisions will be data-dependent. At the upcoming meeting, BOC will also release the updated economic projections, which should have incorporated the impacts of fiscal stimulus and USMCA trade agreement.