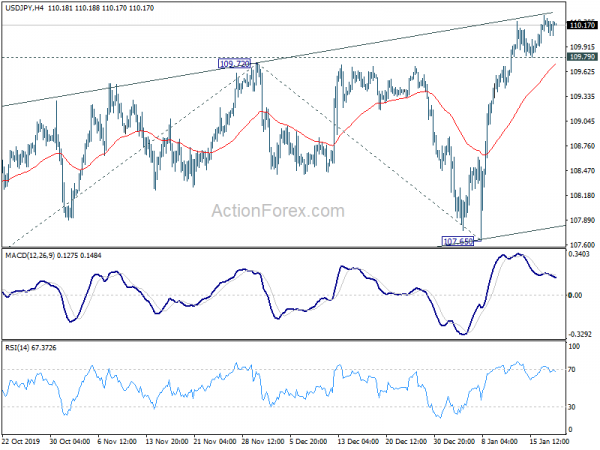 The financial markets are generally steady in Asian session today. Dollar turns slightly softer against Euro and commodity currencies, but losses are so far limited. Though, Sterling is clearly weak as pressured by speculations of BoE rate cut. The Pound will face some more challenges from economic data this week, before heading to BoE meeting on January 30. Overall, trading would remain subdued today with US on holiday. But volatility will heat up with three central bank meetings scheduled later in the week.

Technically, immediate focus in on 1.1085 support in EUR/USD. Break will resume the decline from 1.1239. A head and shoulder top pattern would be completed too, which turns near term outlook bearish for 1.0981 support. Correspondingly, 0.6849 support in AUD/USD is another level to watch too. Break will also reaffirm near term bearishness for 0.6754 support.

American farmers’ support for President Donald Trump hit records after completion of US-China trade deal phase one. According to the Farm Journal Pulse poll, 64% of 1286 respondents said they strongly approve of Trump. 19% said they somewhat approve. Only 13% said they disapprove of the president’s performance.

Trump said he would seriously enforce the trade agreement with China and he believed “it’s going to work out. He added that “China is going all out to prove that the agreement that we signed is a good agreement.” According to the deal, China will buy USD 36B of US agriculture products this year, and more than USD 43B in 2021.

China’s Minister of Industry and Information Technology spokesperson Miao Wei said the government will continue with tax and fee reductions in 2020 to support growth. Focus will be on manufacturing sector, with increase in research and development investments.

Miao said “looking forward to 2020, industrial development faces many difficulties and risks,” and ” pressure on stabilizing industrial growth is still big.” But the government will be able to “ensure the smooth operation of the industrial economy” with the above efforts.

On 5G technology, Miao said more than 130,000 base stations were built by the end of last year.  35 mobile phone terminals received network access licenses. More than 13.77m 5G phones were made. These phones are expected to cost less than CNY 1500 in Q4.

Abe told the parliament that “under an increasingly severe security environment in Northeast Asia, diplomacy with neighboring countries is extremely important”. And, “essentially, South Korea is the most important neighbor with which Japan shares basic values and strategic interests.”

Abe also urged to leave the issues of wartime labor behind. And, “I sincerely hope South Korea honors the commitments between the two counties and works toward building future-oriented relations.”

BoJ, BoC and ECB to meet, and lots of data too

Three central banks will meet this week, BoJ, BoC and ECB. All are expected to stand pat. BoJ meeting will likely be a non-event. BoC’s messages to the markets have been rather confusing in recent months. It sounded alerted by warning that Canada’s resilience could be tested. Yet, there was no further dovishness in other communications. It’s given another chance to clarify its stance with the monetary policy statement this week. ECB looks comfortable with the current monetary policy. Focus will be more on the details regarding policy framework reviews.

On the data front, UK employment and PMIs will catch a lot of attention and have an influence on whether BoE would cu