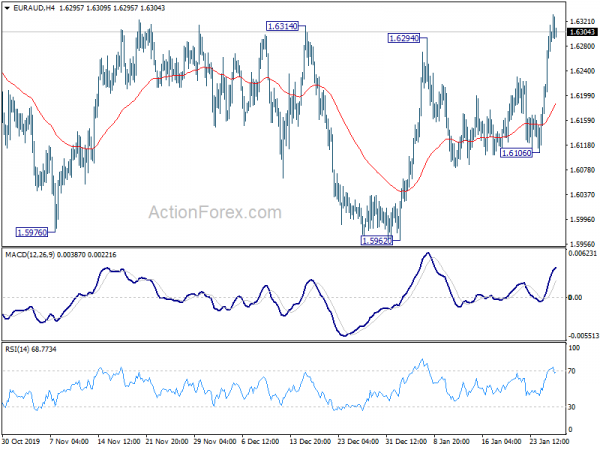 Risk aversion continues in Asian markets as outbreak of China’s coronavirus shows now sign of slowing. But the moves in the currency markets seem to have passed a climax. Commodity currencies are consolidating in tight range close to week lows now. Yen, Swiss and Dollar are also digesting some gains.

According to latest update from China’s National Health Commission, confirmed cases of coronavirus in China jumped to 4515 as of January 27, up from 2835 reported a day earlier. Death toll also rose to 106, up from 81.

The coronavirus also continues to spread to other places in the world. Germany has confirmed the first case late on Monday, in the town of Starnberg, 30km southwest of Munich. The health department said the patient is in “good condition” and isolated under medical observation. Also, “people who have been in contact (with the patient) have been informed in detail about possible symptoms, hygiene measures and transmission channels.”

The US Centers for Disease Control said yesterday that the number of “patients under investigation” in the U.S. has almost doubled from the 63 reported on Thursday, to 110. The agency  increased its travel warning for all of China, asking people traveling to practice “enhanced precautions.”

Japan’s Economy Minister Yasutoshi Nishimura warned of the economic impact of China’s coronavirus outbreak today. He said at a news conference, “there are concerns over the impact to the global economy from the spread of infection in China, transportation disruptions, cancellation of group tours from China and an extension in the Lunar Holiday”.

“If the situation takes longer to subside, we’re concerned it could hurt Japanese exports, output and corporate profits via the impact on Chinese consumption and production,” he added.

Alan Oster, NAB Group Chief Economist: “At present there appears to be a relatively large divergence between confidence and conditions, and we will continue to watch the survey to see how this resolves. Though, if confidence and forward orders remain weak, it is likely that the early part of 2020 could see further deterioration in the growth momentum (especially in private sector demand). We think that more policy stimulus will be needed to boost the economy over 2020”.

Swiss will release trade balance. UK will release CBI realized sales. But major focus will be on US durable goods and consumer confidence.