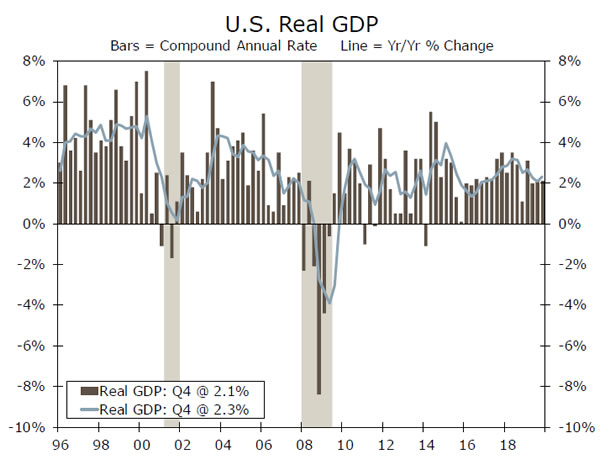 The first week of the Chinese Lunar New Year started off with coronavirus fears sending financial markets into a tailspin over the potential impacts of the worldwide spread of the virus on already weak global growth (see Topic of the Week on page 7.)

However, through the noise of the day-to-day market volatility, economic growth in the U.S. continues to hold up fairly well. Real GDP grew 2.1% on a quarterly annualized basis during Q4—a solid outcome—which is roughly in line with the pace averaged over the past decade.

Looking under the hood, growth in Q4 was boosted by a sizable 1.5 percentage point contribution from net exports, as a modest increase in exports was offset by a steep decline in imports. The threat of additional tariffs in December likely led many importers to pull purchases forward into earlier in the year, which helps explain the dramatic decline. That noted, business fixed investment continued to be a drag, owed to the combined forces of the trade war, the Boeing 737 MAX sidelining, and a pullback in the energy sector. However, consumer spending remained firmly in positive territory, and an upturn in government purchases provided some additional support. Furthermore, lower mortgage rates spurred the second straight quarterly rise in residential investment.

Residential construction and new and existing home sales have reversed course and are now on a positive trajectory. New home sales slipped 0.4% in December, but ended the year up 10.3% compared to 2018. The widespread improvement in the housing data can also be seen in the homeownership rate, which climbed to 65.1% during Q4, the highest since 2013.

Both housing and the broader economy should continue to be supported by lower interest rates moving forward. The first FOMC meeting of 2020 yielded no change to the federal funds rate, with officials choosing to maintain the current 1.50%-1.75% target range. Given the effective federal funds rate has been trading closer to the bottom of that range, Fed officials lifted the interest rate paid on excess reserves by 5 bps in order to incentivize commercial banks to keep more reserves parked at the Fed and help keep the effective rate closer to the middle of the target range.

We expect the Fed to hold-off on any adjustments to the federal funds rate this year. Wh