Twitter Stock Pauses Above Uptrend Line, Loads For Next Direction 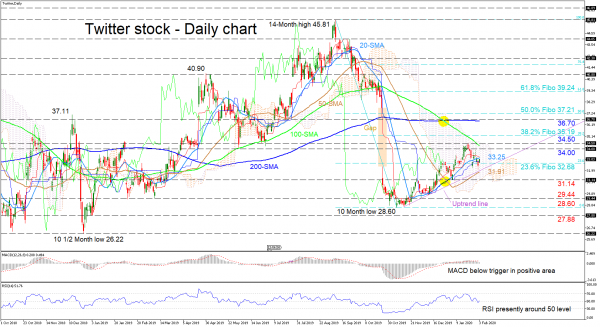 Twitter stock is currently consolidating around 32.68 – which is the 23.6% Fibonacci retracement of the down leg from 45.81 to 28.60 – capped by the 20-day simple moving average (SMA) and supported by the 50-day SMA and uptrend line drawn from 14 November 2019. Backing this view are the momentum oscillators, the flat 200-day SMA and Ichimoku lines.

The MACD has slipped below its red trigger line but both are still hovering slightly above zero, while the RSI is lingering around its neutral mark. Noteworthy are the SMAs, which reflect conflicting signals as they converge around the 33.30 area, suggesting that the stock may endure a sideways move for a while longer.

Summarizing, the very short-term bias appears neutral-to-bullish above the uptrend line and 31.14 level, and only a break above 34.50 would boost the positive picture.