Weekly Economic and Financial Commentary: A Solid Week To Be Sure, But Keep an Eye on the Details 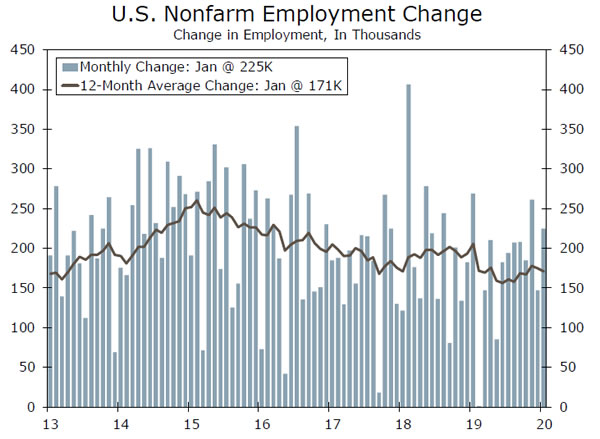 A Solid Week To Be Sure, But Keep an Eye on the Details

U.S. employers added another 225K workers to their payrolls in January, an outcome that exceeded expectations. Owing partly to the fact that more people are entering the in the labor force, the unemployment rate edged higher to a still-low 3.6%.

Another drop in initial claims for unemployment insurance attests to the fact that the labor market remains tight, but there were a few chinks in the armor of this otherwise solid jobs report.

The manufacturing sector lost jobs for third time in four months, and there were no auto strikes to blame this time. Layoffs were not limited to the factory sector either as financial services went from slowing job growth to a slight decline in January. Retailers also posted net layoffs for the second time in three months.

A hallmark of the current cycle has been that despite a low unemployment rate, there has not been sustained periods of the sort of strong wage growth it takes to meaningfully push inflation higher. On that basis, we see little to change in the Fed’s intentions from today’s solid jobs report.

Manufacturing ISM Edges Up, More Strength in Services The ISM manufacturing index came in at 50.9 in January after touching the lowest level since the recession in December. This key yardstick for the manufacturing sector had been in contraction territory for five straight months. So the move to expansion from contraction is certainly welcome, but we are not completely out of the woods with the trade war, and we are only beginning to understand the potential effects of the coronavirus outbreak and what it means for supply chains. The non-manufacturing ISM has been less vulnerable to some of the factors that have buffeted the fac