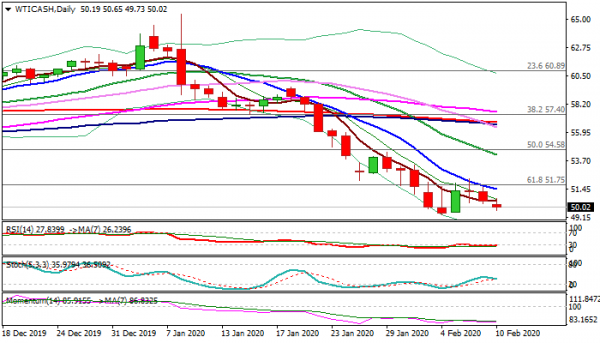 WTI oil price extends weakness on Monday and is on track to fully retrace mild $49.41/$52.28 correction, which was capped by falling 10DMA. The sentiment remains weak on reduced demand from China, due to coronavirus outbreak and worries whether Russia would join new efforts of the biggest oil producers to further reduce the output in attempt to stabilize oil market. Oil was down 20% in January after virus spreading reduced demand and raised fears of oversupply in the market. The WTI price fell to the lowest levels in eleven months, after breaking important technical supports at $51.75 and $50.50 as well as probe below psychological $50 level. Firmly bearish daily studies support further weakness, but bears might be delayed further as weekly stochastic is deeply oversold. Extended consolidation between $50 and $51.43/75 (10DMA/broken Fibo 61.8% level) is seen as likely near-term scenario before bears continue towards next target at $48.26 (Fibo 76.4% of $42.61/$66.54 ascend). Only break and close above $52 would sideline bears and signal stronger recovery. Traders focus the news from OPEC+ group regarding consensus for production cut increase, as well as US crude stocks reports on Tue/Wed which would provide fresh signals.