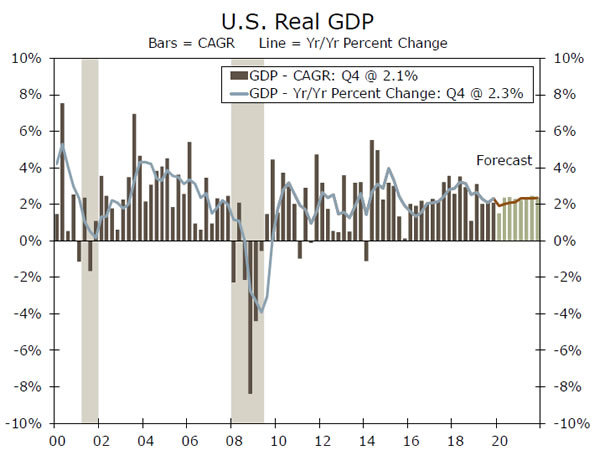 As the ongoing coronavirus outbreak understandably continues to capture financial markets’ attention, this week offered a wideranging release of instructive economic indicators that continue to extend overarching themes we have seen in the overall economy in recent months.

The first theme highlights the primary strength of the ongoing economic expansion: the resilient U.S. consumer. Retail sales increased for the fourth consecutive month in January, up 0.3%. Spending gains were broad-based as nine of the 13 major categories increased on the month, led by building materials and eating & drinking establishments. Not all was rosy, however, as “control group” sales—which feed directly into personal consumption in the GDP report—remained flat, weighed down by a 3.1% drop in clothing. That said, the consumer remains in good shape at the start of the year. Resilient hiring gains and solid wage growth have buoyed consumer sentiment and spending. While the coronavirus presents a risk, we look for this consumer resilience to continue, with spending increasing at a healthy 2.5% pace in Q1.

The second theme highlights the ongoing struggles in the industrial sector. Industrial production fell 0.3% month-overmonth in January, marking the fourth decline over the past five months. Mining rose 1.2%, while unseasonably mild winter weather resulted in utilities plunging for the second straight month. Manufacturing output fell 0.1%, largely due to a 10.7% drop in aircraft & parts, a result of the Boeing 737 MAX production shutdown. Outside of the Boeing impact, solid gains were seen in motor vehicles and computers & electronics. Looking ahead, headwinds should continue to plague the sector in the near term, as concerns now center on supply chain disruptions emanating out of China as a result of the coronavirus outbreak.

The third theme highlights the steady, yet tame, performance of consumer inflation. The Consumer Price Index (CPI) rose 0.1% month-over-month in January, taking the year-over-year pace up to 2.5%. Core CPI inflation remained steady at a 2.3% year-over- year pace for the fourth consecutive month, suggesting that the underlying trend, while in line with the Fed’s target, is still not running at levels that would materially change its outlook. As such, we continue to expect the Fed to remain on the sidelines for the foreseeable future.

So what does this all mean for the U.S. outlook? On balance, the U.S. economic data have broadly shown a more positive trend over the past few months, and this week’s indicator performance supports that trend. That said, GDP growth in Q1 is nonetheless set for a slowdown, to a 1.5% annualized pace, as another sizeable drag from inventories alongside a modest drag from trade are poised to weigh on the pace o