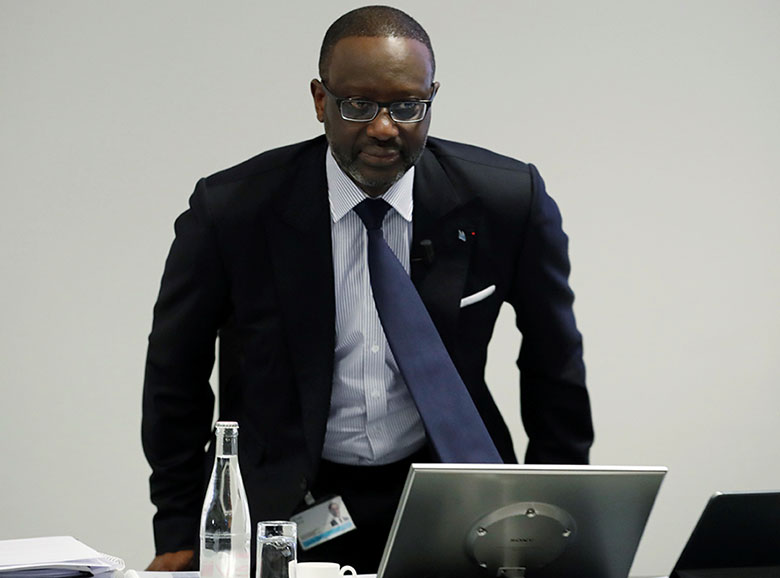 Outgoing CEO Tidjane Thiam at the annual news conference in Zurich on Thursday, to present Credit Suisse’s results for 2019

Credit Suisse on Thursday reported operational pre-tax income of SFr4.3 billion for 2019 after stripping out exceptional reported items. That is 18% up on the SFr3.6 billion in 2018.

In the first full year after completion of the three-year restructuring implemented by departing chief executive Tidjane Thiam, Credit Suisse has returned to growth.

Return on tangible equity (RoTE) has gone from negative -7% in 2016 up to 9% last year. The remaining management team is confident of hitting its 10% RoTE target for 2020, which Thiam, presenting his 19th and final set of quarterly results, says has got off to a flying start.

“It’s going to be a great first quarter,” Thiam says, putting just a little pressure on his successor. “We are reaching the point where running the bank will be more exciting.”

Credit Suisse can invest and not just in wealth management.

However, Thiam will not be around to see this, after the board asked him to resign in the wake of surveillance operations on departed executives, even though its own investigators cleared the chief executive of involvement.

“I serve at the pleasure of the board,” says Thiam. “And if the board decides a change of leadership is needed, it is my job to make that happen. I do so with a clear conscience. It is not in my job description to make myself indispensable. It is to build a good company.”

Thiam must have thought back to his first appearance at Credit Suisse results in mid 2015. Having only just been recruited, he had to report earnings he had had absolutely nothing to do with and justify the idea of an insurance chief executive running a bank.

Be strategic, but also be pragmatic. And don’t have too much pride

He later presented a first version of his turnaround plan, then saw financial markets collapse in the final months of 2015 and had to draft a more radical one. That raised doubts about his early declaration that he fully understood investment banking and drew some derision.

Looking back now, Thiam says: “Consistency can be a refuge for fools.”

The facts had changed. It might have been humiliating to alter his plan, but it was the right thing to do – moving even more capital from the low-returning and volatile markets businesses to the stable and higher-returning wealth management ones that also offered better prospects.

Thiam halved value at risk (VAR) and risk- weighted assets (RWAs) and cut a lot of costs but he did not abandon Global Markets. The division has recently had a new lease of life, for example in its collaboration with international wealth management (IWM) to provide structured products to high-net-worth clients.

New CEO Thomas Gottstein at the news conference on Thursday

On his second to last day at Credit Suisse, Thiam was not just proud of financial results. He also recalled promoting Thomas Gottstein to run the Swiss Universal Bank (SUB), the biggest unit of Credit Suisse. Now Gottstein takes over from him.

Gottstein came to praise his old boss, calling the 2019 results “a testament to the significant progress we have made in the past four and half years”.

Gottstein says he sees no reason to change either the strategy – to be a leading wealth manager with strong investment banking capabilities – or the unusual divisional set up of the group, which has, for example, private banking businesses inside the Asia-Pacific division, the domestic SUB and the emerging-markets-focused IWM division.

“We believe we have a global business, organized regionally,” says Thiam. “It’s a model that allows you to be close to your clients and nimble.”

He suggests that more banks are now following this structure.

I see many opportunities for growth in each of our five divisions and this growth should, for the first time in a long time, be based on the re-investment of surplus capital

The standalone results of the investment banking and capital markets unit, which suffered a loss of $161 million for 2019 down from $350 million of pre-tax profit in 2018, was the one blot on the day.

The reason is fewer completed M&A deals by financial sponsors and a slow year in Credit Suisse’s signature leveraged finance business in 2019.

However, offering those capabilities has been key to doing more and more profitable wealth management business with ultra-high-net-worth clients in Asia, providing a model the bank now intends to follow in IWM. Credit Suisse has been investing in investment banking capabilities, for example in healthcare and technology, even in a tough year.

Gottstein says: “Going forward, I see many opportunities for growth in each of our five divisions and this growth should, for the first time in a long time, be based on the re-investment of surplus capital.”

Asked whether he might next return to politics or stay in financial services, Thiam offered no clues, saying only he would first enjoy some rest.

“I have given five years of my life to this company,” he says. “That is not nothing.”

He leaves with a couple of observations about banking. First, on the way European banks manage not just return on capital but return of capital to shareholders, he champions greater use of flexible share buy-backs, which can be paused and resumed, rather than rigid high-dividend policies.

Second, he accepts that consolidation in Switzerla