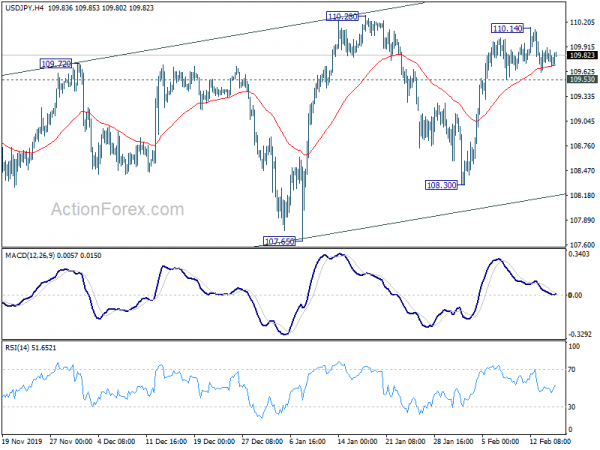 Asian markets are mixed as another week starts. Nikkei weakens, together with Yen, as data showed the Japan economy suffered worst contraction in six years. Singapore Strait Times is also mildly lower after the government downgrade this year’s growth forecast. Yet, China and Hong Kong stocks are trading mildly higher despite continuation of Wuhan coronavirus outbreak. The currency markets are also mixed too, with Kiwi trading as the weakest while Aussie is the strongest.

According to China’s National Health Commission, on February 16, confirmed coronavirus cases in the country rose 2048 (comparing to 2009 on February 15), to 70548. Death tolls rose 105 (comparing to 142 a day ago) to 1770. Health officials said on Sunday that two days of decline in new confirmed cases affirmed the government’s effort in containing the outbreak. But data released today clearly disagree to the claim.

Outside of China, Japan is hardest hit with over 400 cases, mainly due to the numbers in Diamond Princess liner. Singapore (75 cases) and Hong Kong (57) follow. Death toll reached 5 with one new case in Taiwan over the weekend.

China’s central bank PBoC announced today to cut interest rate on its medium term loans to cushion the impact on the economy from the Wuhan coronavirus outbreak. Rate of CNY 200B worth of one-year medium-term lending facility loans is lowered by 10bps to 3.15%. Also, CNY 100B of liquidity is injected to financial institution through reverse repos. Today’s move is believed to pave the way for a cut in the benchmark loan prime rate on Thursday.

Japan GDP contracted -1.6% qoq in Q4, much worse than expectation of -0.9% qoq. In annualized term, GDP contracted -6.3%, biggest contraction in six years. Looking at some details, private consumption dropped -2.9% in response to the sales tax hike in October. Capital expenditure dropped -3.7%. External demand contributed to 0.5% point to GDP growth, in sufficient to offset -2.1% negative contribution from domestic demand. With impact from China’s coronavirus outbreak, contraction might extend into Q1, making it a technical recession.

Economy Minister Yasutoshi Nishimura said “the government had hoped Japan’s economy would continue a moderate recovery. But we must be vigilant against the impact of the coronavirus on domestic and overseas economies,”

Outlook is pessimistic too based on a Reuters survey that tracks BoJ’s Tankan. The Reuters Tankan manufacturer sentiments index rose from -6 to -5 in February. Services index rose from 14 to 15. Business confidence is not too much lifted by the US-China trade deal. The government might be forced to launch another around of fiscal stimulus soon to support growth.

Singapore government downgraded growth forecasts for the year as China’s Wuhan coronavirus outbreak is weighing on the country’s economy. For 2020, the Ministry of Trade & Industry projected growth in range of -0.5% to 1.5%, lowered from prior estimate of 0.5% to 2.5%.

Gabriel Lim, permanent secretary at the ministry, said, “as the COVID-19 situation is still evolving, there is a significant degree of uncertainty over the length and severity of the outbreak, and hence its overall impact on the Singapore economy.”

Singapore has the second highest number of coronavirus cases (75) outside China, next to Japan. Finance minister Swee Keat might launch a strong stimulus package in the budget delivered tomorrow, to offset the economic impacts.

Focuses on Eurozone sentiment on impact of coronavirus outbreak

Considering last week’s downside breakout in Euro, Eurozone data including German ZEW and more importantly, PMIs will be closely watched this week, on the impact from China’s coronavirus breakout on sentiments. Also as speculations for a ECB rate cut in the second half of the year have somewhat built up, ECB monetary policy accounts will also be watched for any clues of dovish bias.

The calendar is also busy elsewhere. UK will feature employment, inflation, retail sales and PMIs. Australia will release RBA minutes, wage price index and employment, which will be crucial to whether RBA would cut in April. Canada will also have manufacturing sales, CPI and retail sales scheduled. Most US data are second-tier but FOMC minutes will certainly catch some attentions.