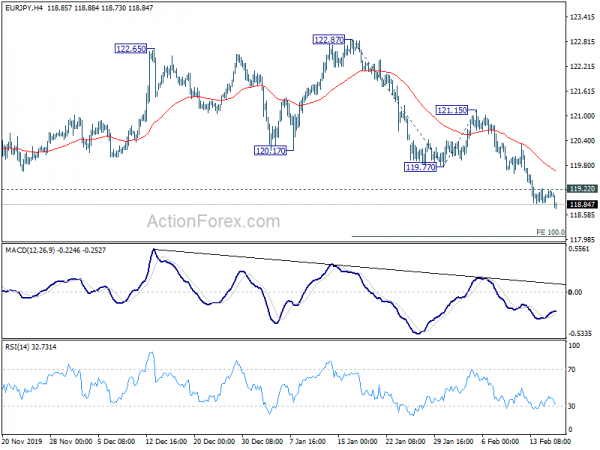 Markets are back in risk off mode in Asia after Apple’s warning. While Wuhan coronavirus cases in China might appear to have slowed, investors remain vigilant. More risks lie ahead with German economic sentiment data featured today. For now, commodity currencies are the weakest ones as led by Australian Dollar. Yen and Swiss Franc are the strongest, followed by Dollar.

Technically, AUD/USD is staying above 0.6662/70 key support zone despite today’s sharp fall. Intraday bias remains neutral for further decline is expected with 0.6774 resistance intact. Firm break of 0.6662/70 to resume larger down trend is expected sooner or later. EUR/USD and EUR/JPY edge lower today and selloff could accelerate on German data. USD/JPY is still staying in tight range of 109.53/110.14. Breakout from the range could reveal the next moves in Dollar and Yen pairs.

Risk sentiments are taken a hit after Apple Inc’s warned that it’s unlikely to meet sales target due to production disruption and weakening demand in China. Operations in China halted after the Wuhan Coronavirus outbreak and resumption is slower than wished. Apple said in a statement “we are experiencing a slower return to normal conditions than we had anticipated.” Global iPhone support will be “temporarily constrained” and the shortages will temporarily affect revenues worldwide.”

According to China’s National Health Commission, on February 17, confirmed Wuhan coronavirus cases rose 1886 to 72436. Death tolls rose 98 to 1868. New suspected cases rose 1432 to 6242. Tedros Adhanom Ghebreyesus, WHO director-general, said on Monday that the data “appear to show a decline in new cases”. But he also cautioned that “it’s too early to tell if this reported decline will continue. Every scenario is still on the table”. He added “This trend must be interpreted very cautiously. Trends can change as new populations are affected.”

South Korea President Moon Jae-in used rather strong words in urging the cabinet to come up with special measures to counter the impact from the coronavirus outbreak. He said as a weekly cabinet meeting, “emergency situations require an emergency prescription. The current situation is much more serious than we thought.” “It is the time when special measures are absolutely necessary to use every possible means that the government can mobilize,” he added.

Moon also said the use of the government’s emergency funds should be just the “beginning”. “This is not enough,” he added. “In order to respond to the emergency economic situations, I want you to exert policy-related imagination that goes beyond expectations with no restrictions.”

Japanese Finance Minister Taro Aso also pledged today to ensure fiscal policy steps to respond to the outbreak. He noted that economic fundamentals are still holding steady, even though slowing global growth had an impact on the manufacturing sector.

In the minutes of February 4 RBA meeting, it’s reiterated that “it was reasonable to expect that an extended period of low interest rates” in Australia. The central bank would continue to “monitor developments carefully, including in the labour market”. It “remained prepared to ease monetary policy further if needed”. But for now, interest rate was held unchanged at 0.75% after balancing the cost and benefits of a rate cut.

RBA also noted that China’s Wuhan coronavirus outbreak “present a material near-term risk to the economic outlook for China and for international trade flows, and thereby the Australian economy.” “”Some commodity prices, notably for industrial metals, iron ore and oil, had fallen on concerns that the coronavirus outbreak would disrupt production in China and reduce Chinese commodity demand in the near term.”

To counter the risk, “lower interest rates could speed progress towards the bank’s goals and make it more assured in the face of the current uncertainties.” However, further rate cut could “encourage additional borrowing at a time when there was already a strong upswing in the housing market”. RBA is “aware of the risk of low interest rates encouraging too much borrowing and driving excessive asset valuations.”

UK employment data will be a major focus today, together with German ZEW economic sentiment. Later in the day, Canada will manufacturing sales. US will release NAHB market index.