The Weekly Bottom Line: All Eyes On COVID-19 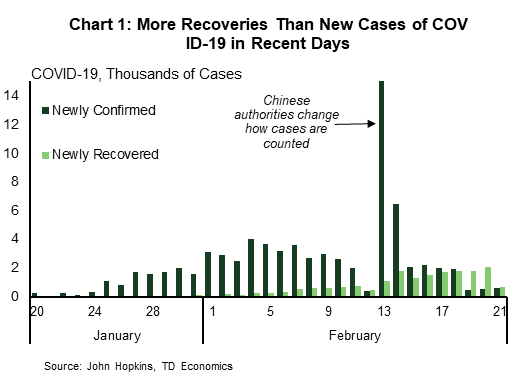 Another busy week comes to a close, with markets hanging on to every development, rumored or not, from the COVID-19 outbreak in China. The S&P500 hit a record high on Wednesday, but promptly retreated on Thursday upon news that many multinationals (i.e. Adidas, Puma, P&G) warned that COVID-19 might impact sales in the first quarter. At the time of writing, the S&P500 stood 1% lower than where it was at the start of the week.

COVID-19 continues to depress China’s economy. Recent reports indicate that factories have been slow to open as quarantines continue to keep workers stuck in their homes. The Chinese authorities have issued guidelines to local officials to help get people back to work, but this would have to be done carefully so as not to undermine containment efforts.

It appears that the virus is slowly being brought under control. As of now, 76,775 people have been infected with COVID-19, and 2,247 have died. The number new cases have come down significantly over the past few days, and the number of recoveries has steadily risen since the start of the month (Chart 1).

Despite the good signs, global manufacturing supply chains are beginning to feel the effects of the virus. Foxconn, Samsung, and various car manufacturers have all faced supply chain disruptions. Companies have also looked to continue production by bypassing China. Samsung, for example, has moved parts of its manufacturing process for its newest Galaxy phone from China to Vietnam. The longer China takes to contain the virus, the more likely it is that manufacturers will explore other locations.

The Federal Reserve is closely watching how the impact of COVID-19 is felt by global economies. In the first Federal Open Market Committee meeting of the year, participants saw tentative signs of stabilization in global growth, but they judged the outbreak to be a key uncertainty in their outlook. If the virus has a greater and more meaningful impact on growth, the Fed may provide more monetary support this year.

If the virus is contained, and Chinese factories are back to normal production soon, we expect the Fed to stand pat in 2020, as it watches the effects of past interest rate cuts move through the economy. Indeed, we have already seen this in the housing market, which finished 2019 on solid footing, and is showing signs of continued momentum in 2020. Although housing starts declined in January by 3.6% month-over-month, it was coming off of a strong December and it was significantly stronger than market expectations of -11.2% (Chart 2). Part of this was likely due to warmer weather, but it is also a testament to the underlying strength in the property sector.

Like housing starts, existing home sales also contracted in January, also coming off a solid December. On the other hand, permits rose strongly in January. With labor markets healthy, mortgage rates low, and a large number of millennials still to move into homeownership, we could continue to see strength in the housing market this year.

This was a relatively eventful week both globally and domestically. Financial markets continued to weigh the impacts of the coronavirus outbreak. The S&P/TSX edged up only 0.2% higher on the week. As of writing, the benchmark WTI oil price was up near 2% on the week as markets weighed supply-side risks in Libya and Venezuela against weakening demand expectations. Reflecting deteriorating risk sentiment, a further downshift in bond yields, and renewed market expectations of central bank stimulus, gold prices shot up to around US$1,640, the highest level since 2013.

In Canada, changes to stress testing rules announced by the Minister of Finance Bill Morneau made headlines. While further details are still likely to emerge, these changes are expected to modestly bring down benchmark rates in the near term. The changes may prompt modest upward revisions in home sales and price forecasts, especially amid notably tight housing markets.

Provincially, British Columbia kicked off the budget release schedule, showcasing a largely “stay the course” budget that aims to remain in the black for the next three years. The budget contained little in the way of policy changes, but highlighted a hefty capital spending package that may lift the province’s net debt to GDP ratio. All told, B.C. still maintains one of the healthiest fiscal positions in Canada.

On the economic data front, Statistics Canada released three reports this week that served to confirm the narrative of a weak Q4 and soft momentum heading into 2020. Manufacturing sales saw 0.7% headline decline and a 0.4% drop in volumes. Transitory factors have been contributing to the weakness in shipments. However, the overall trend has been unambiguously weak, and the sector suffers from an inventory overhang that will weigh on future production. On a related note, the continuation of the rail blockades for a second week will likely weigh on February’s shipments and contribute further to inventory build-ups.

Also disappointing, nominal and real retail sales were flat in December. The sector capped off its worst performance seen since 2009, despite surging population. While e-commerce sales were up an impressive 31.5% y/y, this category still represents a relatively small share of overall retail trade.

Finally, headline CPI inflation came in at 2.4%, slightly higher than expectations. A a range of transitory factors (e.g. oil prices) have driven the headline higher. The Bank of Canada’s core measures edged lower in January to average 2.0%. With lackluster economic growth in Q4 and soft momentum heading into 2020, a widening output gap may put downward pressure on prices in the months ahead.

These weak signals are unlikely to go by unnoticed to the Bank of Canada, which has turned more dovish in its recent communications. Indeed, the central bank has been paying close attention to consumer spending, which has remained lackluster. Financial stability concerns and well-anchored inflation were reasons the central bank remained on hold last year, but with downside risks building we still expect a rate cut in the second quarter of this year.