The Implications of the Phase One Trade Deal for the U.S., China and the Globe 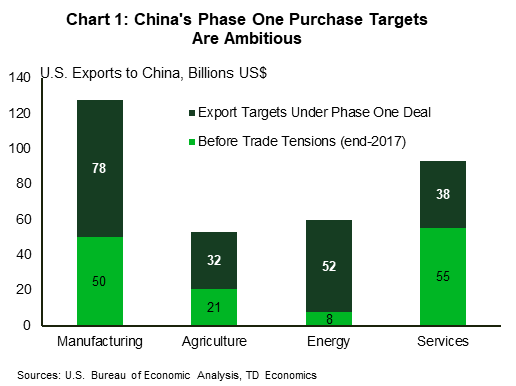 The U.S.-China trade war, ongoing since 2018, came to a ceasefire on January 15, 2020 with the signing of a ‘Phase One’ agreement. The deal does not mark a full cessation of hostilities, as several issues remain unresolved. Even as the U.S. pulled back from the threat of future tariffs and has cut the rate on the most-recent round of tariffs in half (to 7.5% from 15%), others remain in place on over $350 billion in goods imported from China, roughly 65% of the total.

Nonetheless, a key part of the deal is a Chinese commitment to raise its imports of goods and services from the U.S. by $200 billion by the end of 2021. This is an ambitious commitment. If met, it would represent a doubling of U.S. exports to China in the agreed categories relative to a 2017 baseline (Chart 1).

The deal should be positive for the American economy in the near term, reducing policy uncertainty, while boosting exports and capacity utilization, and potentially lifting investment within the sectors covered by the deal.

Still, such a rapid increase in imports is unprecedented in an era of slowing Chinese economic growth. Achieving the target is likely to come at the expense of other countries, which may find that China substitutes their products in favor of U.S. sourced goods. For most large advanced economies, the exposure is mainly to manufactured goods, which represent bigger shares of economic activity relative to energy and agriculture.

The deal represents a move from free trade to managed trade. It follows a significant degree of trade diversion already evident in the data due to tariffs enacted over the past two years. The trade deal may reverse some of this, but it is unlikely to mark a return to more integrated rules-based global trade. The move away from a market-based system of resource allocation and the principle of comparative advantage risks undermining efficiency, creating negative externalities, and ultimately slowing potential economic growth.

China’s commitment to raise purchases of U.S. goods and services by $200 billion are spread between agriculture, manufacturing, energy and services.1 There are specific intermediate targets for increases in 2020 and 2021 relative to the 2017 baseline (Table 1).

Outside of China’s pledge of $200 billion in additional purchases, the U.S. also won commitments to reduce non-tariff barriers to agricultural trade, better protect U.S. intellectual property, and open its financial system to American and global companies. On many of these items, China was moving in this direction already, but the deal codifies its commi