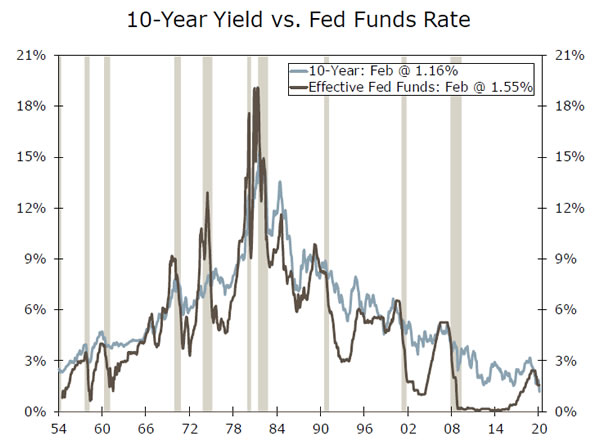 The COVID-19 coronavirus hammered financial markets this week and rapidly raised the perceived likelihood of additional Fed accommodation. The S&P 500 fell close to 14% as worsening outbreaks in South Korea and Japan (where schools have been closed) and in northern Italy (the first advanced Western economy to have a major outbreak), drove volatility to the highest level since December 2018. Moreover, the wave of fear and risk-off moves drove the U.S. ten-year yield to an all-time low this week, while corporate bond spreads are rising rapidly. Clearly, financial conditions are tightening, and threaten to choke off economic growth beyond the direct effects of the coronavirus.

The bond market now expects almost four Fed rate cuts by the end of the year, but one might rightly wonder how lower short-term rates would alleviate supply chain disruptions and aversion to international travel. Prior to the last major financial market flare-up, in December 2018, one could make the case that short-term rates were overly restrictive. Today it is hard to make that same case, after the 75 bps of easing the Fed delivered last year after reversing course. We believe the Fed will try to remain patient, and look for a “material” change in the outlook—based on hard data—before cutting again. Dallas Fed President Robert Kaplan stated on Tuesday that the Fed is “a number of weeks away from being able to make the judgment,” while Vice Chairman Richard Clarida said “it is still too soon to even speculate about either the size or the persistence of these effects.” The next FOMC meeting is on March 18. We expect the Fed to remain on hold then, but it will certainly signal it’s closely watching downside risks, both in its new dot plot and in its rhetoric.

If and when the committee decides it needs to ease again, it most likely won’t be just once. The FOMC has launched six easing cycles in the past thirty years, and each time was at least 75 bps. In short, it is entirely possible the Fed delivers three rate cuts for the second year in a row—the first time in response to the trade war and slowing global growth and the second in response to a viral epidemic. Yet despite the bond market’s conviction, it is impossible to say with certainty what will happen. We cannot predict the spread of the virus, but news headlines and financial markets will certainly try. For now, at least, patience is perhaps the best option.

The new economic data this week were actually fairly positive, but we add extra emphasis to the usual caveat that nearly all economic data are lagging. Nondefense capital goods orders rose 1.1% in January, pulling the three-month annualized rate up to the highest since the trade war flared up in August. Yet just as the Phase I trade deal provided relief to the lagging manufacturing sector, COVID- 19 emerged as its latest scourge.

Consumer confidence rose to a six-month high, but frightening images from abroad should weigh against a historically strong labor market in coming weeks. Personal income rose 0.6% in January while personal spending rose 0.2%. New home sales set a cycle high, and housing should continue to strengthen, with mortgages rates at record lows and likely to stay there, particularly if the bond market’s forecast of lower rates pans out.

After months of heightened trade tensions, producers got a brief reprieve with the signing of the U.S.-China Phase I trade deal in January. While purchasing managers continued to cite tariffs as a concern in last month’s ISM manufacturing survey, the de-escalation was enough to push the index above 50 for the first time in five months. As trade tensions receded, the spread of COVID-19 has emerged as a new headwind for the manufacturing sector. Factory shutdowns in China and other efforts to contain the virus are likely to disrupt manufacturing in the United States. It is less clear, however, exactly when we will begin to see an effect in the data.

Regional Fed manufacturing surveys for February have not indicated much disruption, though most of these surveys only reflect conditions through the earlier part of the month. We anticipate the index will be able to hold its gains in February, but we will be reading closely for signs of virus-induced disruptions.

These survey metrics and their forward-looking components are likely to offer the first signs of potential business impact from the coronavirus. However, the domestic nature of the service sector should isolate it from disruptions abroad to some extent.

The labor market started the year off strong with employers adding 225K jobs in January. The headline figure was flattered by large jumps in hiring for construction and leisure & hospitality due to unseasonably mild weather, though the underlying trend remained strong. Employers have added an average of 206K jobs over the past six months, and most labor market