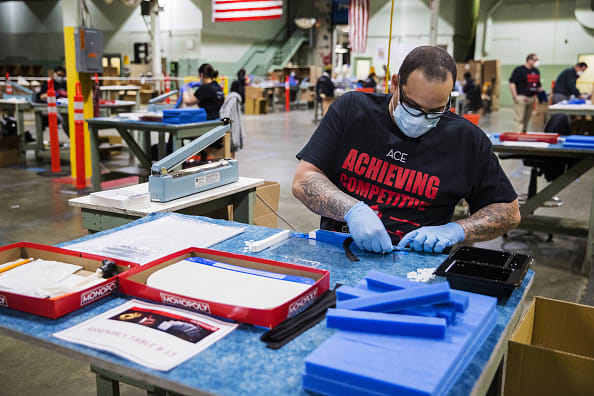 As the economy moves into the second half of the year, economists expect to see a bounceback, but the resurgence in Covid-19 threatens to make that rebound less potent than expected.

More than a dozen states have now paused or rolled back some reopening activity. If the Covid outbreak gets worse, there is a bigger threat to the labor market, and the job gains in May and June could quickly turn to losses by July.

“If you’re a bar in Florida, or Texas, or California, how do you handle two shutdowns?” said Michael Gapen, chief U.S. economist at Barclays. “I was hopeful we would buy a little more time and get into the fall before the virus started picking up again.”

The U.S. is now reporting nearly 40,000 new infections a day, nearly double the 22,800 from mid-May, and they are mostly from states across the South and West. White House health adviser Dr. Anthony Fauci told a congressional committee Tuesday he is concerned that new U.S. cases could rise to 100,000 a day.

“We’re worried about a second wave. We laid out what we thought would be rolling regional outbreaks. That doesn’t have the same impact as the whole country but there’s collateral damage,” said Diane Swonk, chief economist at Grant Thornton. “People get afraid and more conservative. …That fear has a big economic impact.”

Gapen said the initial shutdowns were intended to stop the spread and allow time for testing capability to improve. “I’m sorry we weren’t more effective in expanding testing. … The only way to really mitigate the spread was to shut things down or to delay reopenings,” he said. “The two policy choices we have right now is testing and mitigation. Until that changes … we have this potential where we have a stop-start recovery.”

The renewed outbreak also puts the focus on fiscal stimulus programs that are set to expire at the end of July unless Congress extends them. One of those is extended unemployment benefits, now giving the unemployed $600 a week on top of state benefits. Funding to help states cope with the cost of the virus would also be expected to be part of a phase 4 fiscal stimulus package. The Senate approved an extension of the small business Paycheck Protection Program late Tuesday.

The next stimulus plan may not move as quickly through Congress as the previous ones because there is a sharp difference in opinion on how much should be spent. Democrats in the House propose more than $3 trillion in spending, but Senate Majority Leader Mitch McConnell has made it clear he would not agree to more than $1 trillion. Congress has already laid out more than $2.4 trillion.

JPMorgan’s Bruce Kasman, who heads economic research, said he expects Congress to ultimately agree to a package of about $1 trillion.

“The household sector got a lot of support. That’s where the fuel for the recovery came from, but the corporate sector is damaged. It has had enormous access to credit to help it through,” he said. “We disengaged the emergency measures in a way to prevent the crisis from becoming a lot more severe.”

Kasman said the economy could begin to grow more slowly in the fourth quarter, with growth up 4.5% and another 4% in the first quarter.

He said the boost from policy will lessen, and he expects more cautious behavior from businesses and consumers because of the virus. “You have to do a lot of things to prevent policy from becoming tight. … Part of that bounce is coming from there, and it’s going to fade relatively quickly. By quickly, I mean six to nine months,” he said.

The Fed has provided an unprecedented amount of monetary stimulus of its own, including asset purchases and liquidity support.

The most optimistic forecasts for the economy project a V-shaped bounce, with a steep drop