Nonfarm Payrolls: A Battle Between Risk Taking and Safety 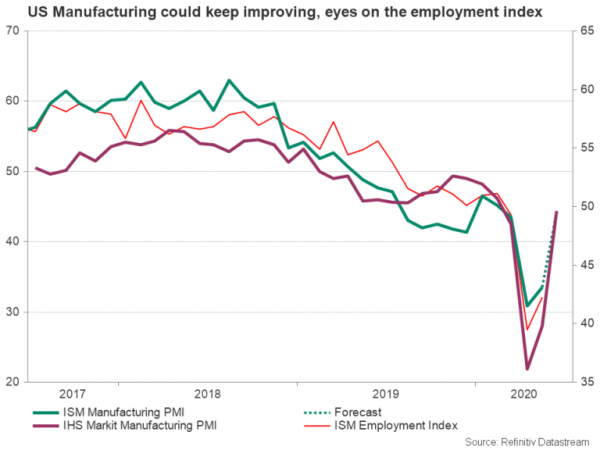 The ISM manufacturing PMI is due today at 14:00 GMT and June’s Nonfarm payrolls will be released on Thursday, a day earlier than usual, at 12:30 GMT as US markets will be shut on Friday for July 4th celebrations. While another upbeat outcome is expected to boost risk sentiment, investors might catch themselves between virus fears and improving data, capping any potential gains.

The health community has been repeatedly warning that the removal of lockdown measures in the absence of an effective vaccine may expose economies to a second wave of infections. That time seems to have come, and it has found markets unprepared as investors did not expect that to happen before autumn. Apparently, the small outbreak of new virus cases in China, which was the first to see its curve flattening, was not taken very seriously. But the Covid-19 resurgence in the US this month topped previous peaks and more countries reported a spike in new infections, while some others did not see a breakthrough at all, bringing investors back to reality.

Encouragingly, central banks and governments keep reiterating that they will do whatever it takes to support consumers and businesses after releasing massive stimulus packages in previous months, maintaining stock indices in an uptrend. Fed chief Powell was the latest to remind markets of that on Tuesday. Simultaneously, the strength in the gold price, which hit fresh highs recently, suggests that investors may not easily abandon safe-haven assets, especially if more economies decide to reverse or delay their re-opening plans. So, gold and stocks could follow a similar direction if current conditions remain as they are, unless the resumption of restrictions continues , resulting in disappointing data releases.

Upbeat data expected, but the situation has changed

On Monday, a stronger-than-expected monthly growth in pending home sales for June favored US stocks and the dollar. Looking ahead, the ISM Manufacturing PMI for June could also bring smiles to investors’ faces on Wednesday if it manages to beat expectations of 49.5, especially if new orders and, more importantly, the employment sub-index show further improvements. The latter could attract special attention as it could provide an early indication of what should be expected from Thursday’s NFP jobs report, which is forecast to show a record increase of 3.0 million in new job positions in June compared to 2.5 million in the preceding month. The ADP private employment survey will also be closely watched for the same reason later today.

Perhaps a second consecutive drop in the unemployment rate, which is said to fall to 12.3% from 13.3% in May, could be the main trigger for a bigger reaction in the dollar, hinting that the stimulus is indeed supporting rehiring in businesses. In other data, average hourly earnings are projected to rise at a softer pace of 5.3% y/y versus 6.7% previously. Yet, this may not weigh on investors’ sentiment and would be considered a rather positive development since the return of low-income employees to work is what is adding downside pressure to average earnings. Markets may also welcome another slowdown in initial and continued jobless claims tracked in the week ending June 27 – includes more recent unemployment data than the NFP.

An upbeat NFP report could have potentially brightened the outlook for the US economy a few weeks ago when markets were more certain that the continuous removal of restrictions would result in further data improvement. But conditions have changed over the past week and this statement may be in consideration following the recent virus spikes and the resumption of some social barriers. Hence, it is almost certain that a negative surprise in this week’s data could only hurt risk appetite, signaling that the recovery may have started to lose steam before the new virus outbreak. On the other hand, better-than-expected readings would come at a bad time and could be viewed as cautiously optimistic, with traders likely waiting for upcoming releases for better clues on whether the virus situation has started to weigh on the data recovery.

Turning to FX markets, the dollar has a dual role, acting both as a safe-haven and a risk asset. So, as long as the Covid-19 resurgence is not exclusively a US story, the dollar could still survive downside pressures in the wake of disappointing numbers. However, upside corrections may be limited too given fears that the data improvement may not continue in the coming months. In other words, it could be a battle between safety and risk taking.

Looking at USD/JPY, the pair bottomed twice around 105.90 before reversing higher, setting the stage for another bullish run. That said, the bulls may need to overcome the trap within the 108.00-108.40 zone in order to revisit the 109.60 resistance area.

Otherwise, a pull back below the 20-day simple moving average (SMA) could bring the 105.97 low back into view, a break of which is required to reach the 105.00 round level.