Silver Bulls Meet Long-Term Trendline, But Not Ready Yet To Give Up 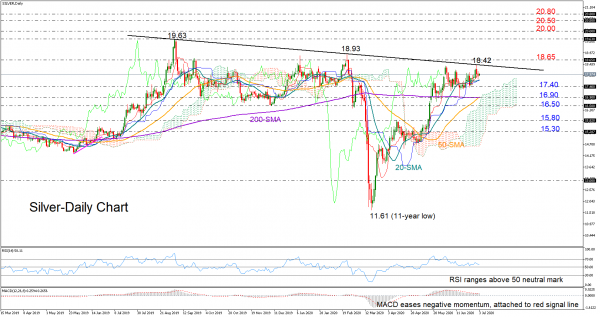 Silver attempted to break the upper border of the neutral zone it has been ranging within this week, but its efforts proved unsuccessful as the trendline joining the peaks from September 2019 defended the bears once again at 18.42.

Hence, the short-run risk is looking neutral-to-positive at the moment and another retest of the soft downward-sloping trendline is likely. Particularly, a decisive close above the 18.65 barrier might be what the bulls are eagerly waiting for to rally towards the three-year high of 19.38 registered last September. Higher, the price may initially stall around the 20.00 psychological mark before heading for the 20.50-20.80 resistance zone.

To the downside, the 17.40 nearby support area may add some footing to the market, but a violation at this point may not attract much attention unless the price slumps below the 200-day simple moving average (SMA) currently ready to move below the 50-day SMA. The negative momentum could further strengthen if the 16.50 barrier is breached as well, with the 15.80-15.30 restrictive zone likely appearing next in the radar.

In brief, silver could trade neutral-to-positive in the short-term. A close above 18.65 could bring fresh buying pressure in the market, while a drop below the 200-day SMA could raise selling interest.