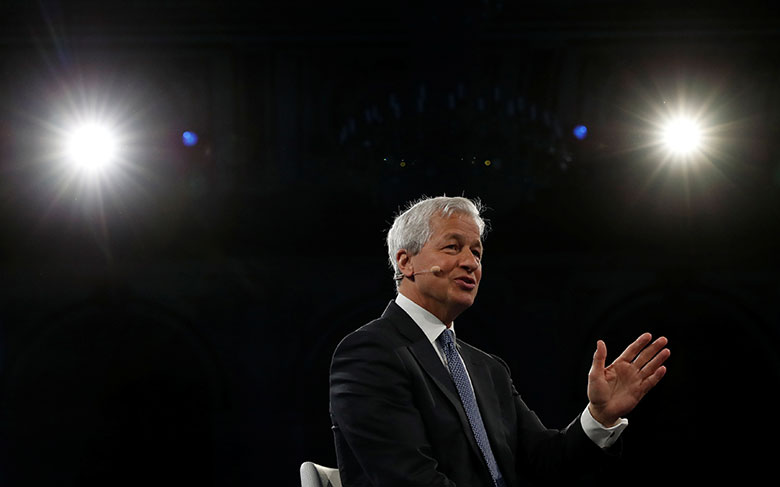 Jamie Dimon changed the format of his annual shareholder letter, which was published on Monday, to focus on the challenges of the coronavirus crisis.

He made the uncontroversial statement that the minimum that can be expected is a bad recession and financial stress comparable to the credit crisis of 2008, before raising the possibility that JPMorgan will suspend its dividend.

Dimon said this could occur under an “extremely adverse scenario” that features a 35% drop in US GDP and a 14% unemployment rate.

Dimon, who likes to highlight the strength of his bank’s balance sheet in good times as well as bad, maintained that even under this scenario JPMorgan would finish the year with strong liquidity and common equity tier-1 capital of $170 billion, for a regulatory capital ratio of 9.5%.

He nevertheless raised the possibility that JPMorgan would follow European banks in halting payments to shareholders.

“If the board suspended the dividend, it would be out of extreme prudence and based upon continued uncertainty over what the next few years will bring,” he said.

Dimon’s stance was in stark contrast to the approach to dividends taken by David Solomon, chief executive of Goldman Sachs. Solomon has seemed keen to differentiate his firm from the banks outside the US that have been pushed by their regulators to suspend dividend payments – perhaps unwillingly in the case of some firms, such as HSBC and Barclays, but with a general recognition that now is not the time to insist on shareholder rewards as usual.

In a recent TV interview Solomon stressed that US banks had already reached a voluntary pact to suspend share buybacks while the coronavirus crisis continues and argued that dividends should continue to flow.

This is the type of approach that caused enduring reputational damage to Goldman Sachs and other banks in the wake of the 2008 crisis.

It is technically correct that dividends form a greater proportion of shareholder payouts than buybacks for banks in Europe and Asia, compared with US firms. But Solomon’s approach sounds insensitive in a time of crisis and reflects an alarming lack of awareness of the impact of his statements, especially as it came just two weeks after news that he was the happy recipient of a 20% boost to his 2019 compensation.

Goldman Sachs did not perform well compared with peers such as JPMorgan in 2019 and Solomon has been cutting employee costs as he seeks to restructure his firm away from a dependence on trading revenue; so a hefty pay raise compared with his 2018 total would have seemed crass even in normal market conditions.

The compensation hike looked downright bizarre against a backdrop of a worsening global health crisis and plunging markets.

Solomon’s pitch for continued dividend payouts in 2020 is also reminiscent of the casuistry that earned Goldman Sachs infamy in the 2008 crisis and its subsequent nickname of the vampire squid. Goldman bought extensive credit default swap protection on collateralized debt obligation exposure in the approach to the crisis, while treading a very fine moral line between hedging itself and continuing to facilitate risky new deals for clients.

Goldman was the biggest beneficiary of a decision by the US government to guarantee default swap payouts by a unit of insurer AIG that was on the hook for many of these derivatives, but Lloyd Blankfein – Solomon’s predecessor as Goldman chief executive – and other senior managers persisted in acting as though they had navigated the crisis with minimal assistance.

Solomon’s current distinction between share buybacks and dividends displays a similar lack of awareness of context, although it should be noted that other US bankers were also trying to differentiate themselves from foreign competitors before Jamie Dimon at least acknowledged that times have changed and a new approach may be necessary.

US banks will launch the first quarter earnings season next week, led by JPMorgan on April 14, with Bank of America, Citigroup and Goldman reporting the next day.