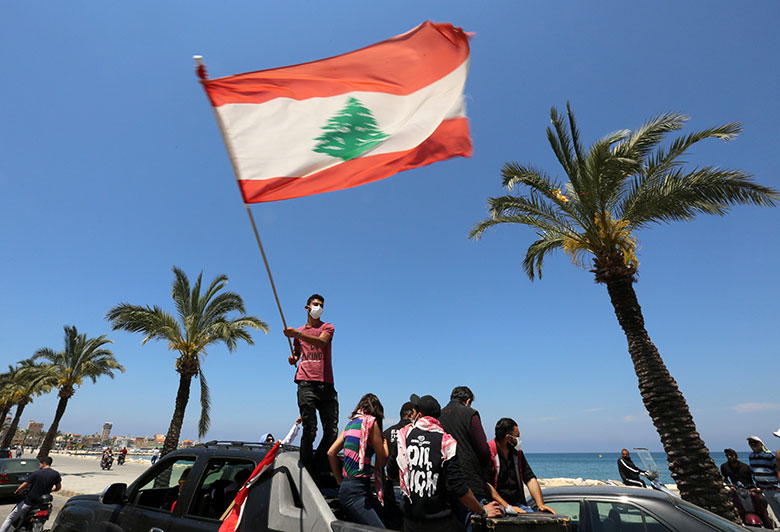 Masked men recently bore a coffin adorned with the Lebanese pound in the city of Zahlé as people protested against years of corruption and mismanagement that have led Lebanon to economic collapse. In Sidon, people waved flags atop their cars on Labour Day.

The Lebanese pound, which has been pegged to the dollar since 1997, has lost 50% of its value since October, causing food and essential goods prices to soar. It is the latest sign that the government’s inability to enact reforms is having real consequences for Lebanon’s population.

On April 30, prime minister Hassan Diab published a 53-page financial recovery plan that, alongside structural reforms and changes to the banking system and central bank, includes allowing the Lebanese pound to adjust to market rates, estimated to be L£3,500 to the dollar.

“The peg to the US dollar that has been maintained over decades is now impossible to restore and must be revamped,” the plan says. “For years the lack of competitiveness of the Lebanese companies has prevented the emergence of a productive and diversified economic base in Lebanon and encouraged the consumption of imported goods through artificially inflated purchasing power.”

They’re too scared of saying the peg is gone. For me, you have to float the pound and make those stupid rates collapse

The government also says it plans to turn to the IMF for financial support, noting that without it, Lebanon will not be able to “tackle fully all the imbalances inherited from the past.”

Lebanon is seeking as much as $10 billion of financial assistance from external sources.

“The peg is finished,” says a senior banking source.

Analysts say the 23-year peg, once a pillar of support and then a key factor in the collapse of Lebanon’s economy, must be carefully managed into any official float.

While the official rate of L£1,507.5 to the dollar continues to be used by the Banque du Liban to import fuel, medicine and basic food stuffs, around 70% of transactions are now conducted at a parallel rate of around L£4,100.

Economy minister Raoul Nehme says consumer goods in Lebanon have risen in price by 50% since October.

“The [float] has indirectly happened as more than 70% of economic transactions are at the parallel rate,” says Garbis Iradian, chief economist for MENA at the Institute of International Finance (IIF). “The current view by the authorities is to unify the dual or multiple exchange rates after an agreement with the IMF.”

“The overvalued exchange rate was one of the main problems for what happened,” he says.  “Imports were rising at dramatic rate and exports remained subdued, leading to persistent large current account deficits, depletion of foreign exchange reserves, and rising debt.”

Diab has laid the blame for the plummeting currency on central bank governor Riad Salamé, but analysts worry that the public fall out between the Banque du Liban and the government could stall an economic reform plan seen as vital to unlocking IMF support.

In reality, there are as many as half a dozen exchange rates in Lebanon.

Multiple exchange rates allow the central bank to ration foreign exchange and restrict the availability of ‘cheaper’ dollars for necessities such as fuel, medicine and wheat imports. But such a system also creates opportunities for arbitrage and prolongs a distorted and inefficient system.

The central bank has two official dollar rates just for banks, one of L£1,500 (for most transactions, including the importation of necessities), and another of L$3,000, which allows dollar depositors to sell up to $4,000 a month against Lebanese cash.

In addition, the central bank has a third official rate against the dollar of L$3,200 for exchange companies, except Western Union/OMT, where a fourth official rate of L$3,800 is allowed.

In the meantime, dollars are for sale on the black market for L$4,300.

Finally, there is a sixth rate offered indirectly by banks looking to attract foreign dollars, the senior banker says. Banks are offering to credit the account of depositors bringing in fresh foreign dollars with 2.2 times the amount in their Lebanese dollar accounts – meaning they get L£6,600 on the first $4,000 and L£3,300 on anything above that.

The banker likened what he called the “Lebanese dollar” or “lollar” to monopoly money. Depositors are able to use these dollars locally, but cannot transfer them abroad.

“Locally, if you go to a supermarket or restaurant, you can use your Lebanese dollar credit card, but you cannot transfer these lollars abroad,” he says. “Lebanese dollars are now worth about 45% in real foreign dollars.”

Analysts believe the government will not be able to unify the multiple exchange rates into a single-market determined currency until it has secured some form of foreign creditor support, most likely from the IMF.

“They’re too scared of saying the peg is gone,” says the senior banker. “For me, you have to float the pound and make those stupid rates collapse. But realistically, I do not advocate floating it completely until you have a deal with the IMF, because if you don’t have a deal, the rate will go up to L£10,000, L£20,000.”

Dollar shortages, exacerbated by falling remittances, means that the central bank does not have the FX required to defend the currency for more than a few months, and given the heightened risks of a health crisis amid Covid-19, the banker says it would be a poor strategy.

“If [Salamé] did, it would last a few months, and then you would have no hard currency left,” he says. “He needs to keep that for the import of necessary goods.”

Iradian agrees that the government should not officially float the currency without an IMF programme and adequate external financing.

Iradian says that with IMF support, and the implementation of crucial fiscal and structural reforms, the parallel exchange rate could appreciate close to an equilibrium rate of around L£3,000 to the dollar.

But he warns the IMF may require Lebanon to float the pound before agreeing to a programme.

“From my experience at the IMF, when the Fund wants to agree on a programme with a county with a parallel exchange and official rates, where the spread is more than 50%, they will put a condition to move to a floating exchange-rate system, an IMF ‘prior action’,” Iradian says.

“I don’t think IMF will agree on a programme with multiple exchange rates because it would be distortive to the economy and will encourage rent seeking.”

Other prior actions such as reform to the electricity sector may be seen as an adequate substitute to unlocking IMF funding, however.

In addition, the recovery plan proposes formalising capital controls at individual bank level, a policy the IMF has been historically against.

“Comprehensive” capital controls, the plan says, will remain in place as long as financial stability remains at risk. It adds: “We assume a gradual lifting starting in 2021.”

Free markets, a liberalized exchange rate and an open economy have been central tenets of the IMF’s advi