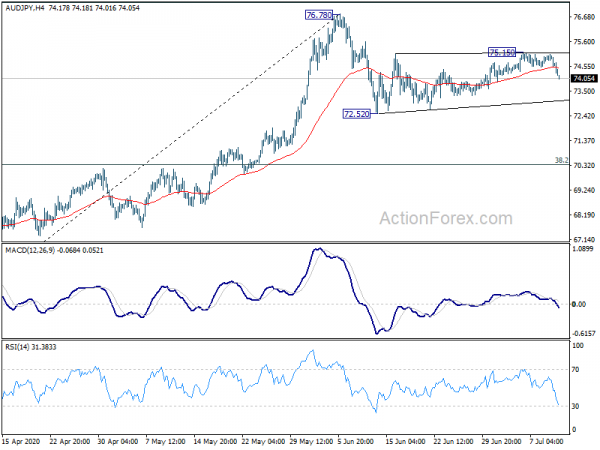 Yen surges broadly today as the financial markets are back in risk-off mode. Or at least, rally in Chinese stocks is having a pause. Investors some what turned cautious ahead of the week. US Secretary of State Mike Pompeo announced sanctions on some Chinese officials, including a Politburo member, over gross violations of human rights in Xinjiang. That’s generally seen at the start of a wave of sanctions, as the US-China relations deteriorate further. Dollar and Euro are following as the next strongest. Meanwhile, Australian Dollar is additionally pressured by spike in coronavirus cases in Victoria. Canadian Dollar is weighed down by the selloff in oil overnight.

Technically, EUR/USD’s breach of 1.1258 minor support dampen the near term bullishness and open up further decline to test 1.1168 support. EUR/JPY’s break of 120.58 minor support should also bring deeper fall to 119.31. USD/CAD’s breach of 1.3624 minor resistance after defending 1.3485 support retains near term bullish for rally through 1.3715 resistance. A focus today would be on USD/JPY, which is eyeing 106.79 minor support. Break will suggest completion of rebound from 106.07 and bring retest of this low.

Australian Dollar drops broadly today and selling pressure also intensified. Victoria state Premier Daniel Andrews confirmed that a total of 288 coronavirus cases were recorded in 24 hours, making a record daily increase since the start of the pandemic. Andrews requested the residents there to wear masks anywhere they can’t social distance. He’s also unsure whether the reimposed lockdown in metropolitan Melbourne would end in six weeks as planned.

The Aussie is also weighed down by weakness in Asian stocks, as China Shanghai SSE ended its winning streak. Yen is back in control as the strongest one for today. AUD/JPY’s steep decline today argues that sideway pattern from 72.52 might have finally completed at 75.15. Correction from 76.78 is ready to resume. Focus will be on 72.52 support, probably next week. Break will extend the corrective fall from 76.78 to 38.2% retracement of 59.89 to 76.78 at 70.32.

US 10-year yield breaking 0.6 while stocks were mixed

France industrial production rose 19.6% mom in May, above expectation of 15.0%. It also nearly recovered all of April’s -20.6% decline. Nevertheless, compared to February, the last month before the start of general lockdown, outlook was still down -21.2%.

Italy will release industrial production in European session. US will release PPI later in the day. But major focus will be on Canada employment. 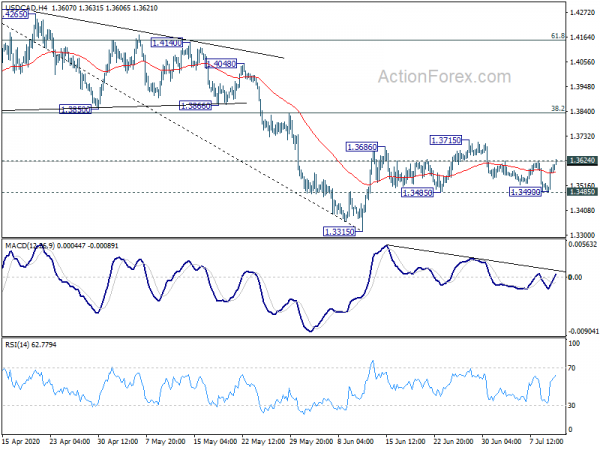