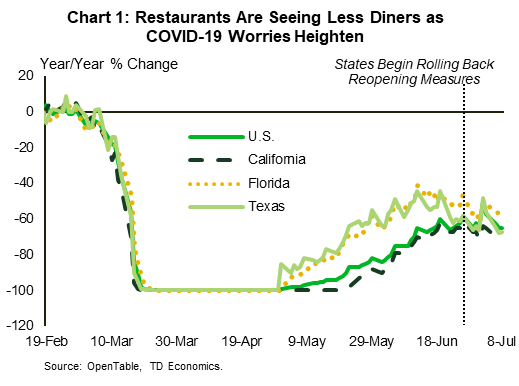 It was a relatively quiet week for equity markets. The record-breaking rise in COVID-19 cases did little to impact markets as the S&P 500 (at the time of writing) was 1.2% higher from close last week.

COVID-19 is spreading at an alarming rate in the United States. Almost 60,000 new cases were added on Thursday, a single-day record, the sixth one in 10 days. Southern states – California, Texas, and Florida – continued to drive the increase in new infections. So far, state authorities have resisted shutting down large swathes of the economy, instead opting to either pause or roll back some reopening plans. However, if cases continue to rise at this speed and hospitals hit full capacity, there may be no other option but to mandate stricter measures.

The impact of the renewed outbreak has not yet been observed in traditional economic data. The ISM non-manufacturing index posted a 11.7-point jump to 57.1 for June. The improvement was broad-based as three of the four subcomponents and 14 out of 18 industries, reported positive growth for the month. But this data release, like other monthly indicators, is backward looking. With the pace of infections picking up in mid-June, these data will not capture the current impact of COVID-19 on the economy.

Higher frequency data provide a clearer picture of present state of the economy and it is concerning. The number of diners at restaurants have plateaued at very low levels. According to OpenTable data, there are 65% less seated diners at restaurants now then there were a year ago. In virus epicenters such as Texas, Florida, and California, restaurant visitations started declining even before state governors reversed reopening plans, highlighting the impact of the health pandemic on consumer behavior (Chart 1).

Employment is also beginning to be affected by the resurgence of COVID-19. More households, specifically lower income households, are reporting declines in their income from employment (Chart 2). According to Homebase data, small businesses are once again beginning to lay off hourly employees.

With the labor market under pressure and expanded unemployment benefit payments expiring at the end of this month, Congress needs to provide further aid to households and businesses.

Talks are underway and Treasury Mnuchin said he supports another round of stimulus checks to individuals and an extension of the Paycheck Protection Program under narrower eligibility criteria. However, he was less supportive of relief funding to state and local governments. On the whole, it is clear, without additional fiscal support, we could see more economic turbulence in the second half of this year.

Economic data and developments this week highlighted two themes: that Canada remains on the recovery track, although the return to some semblance of normalcy will be challenging and prolonged and, that the price paid to backstop the economy has been tremendously steep.

The week brought a dose of good news on housing markets, as sales jumped by 80% m/m in Toronto during June, boosted by the release of pent-up demand. Homebuilding was also robust in June, as starts clocked in at a healthy 212k units (see our summary). Homebuilding has held up well during the pandemic, although as we noted this week, lower population growth will be a medium-term headwind.

The Bank of Canada also released its summer Business Outlook Survey (BOS) early in the week (see commentary). With responses garnered between May 12th and June 5th, the survey missed the worst of the slowdown (April), but also some of the re-openings, particularly in Ontario. Respondents were quite pessimistic. Indeed, sales and investment expectations were downgraded, helping push the summary BOS Indicator deeper into negative territory and highlighting the tough road ahead for Canadian firms. The one silver lining was that hiring intentions remained firmly positive, with most firms planning on bringing workers back in the next 12 months.

Employers are so far keeping their word. Employment expanded by 953k in June, according to the Labour Force Survey report released this morning (summary here). Hiring increased in every province and was up in almost all industries,