USD/JPY closes the week under pressure 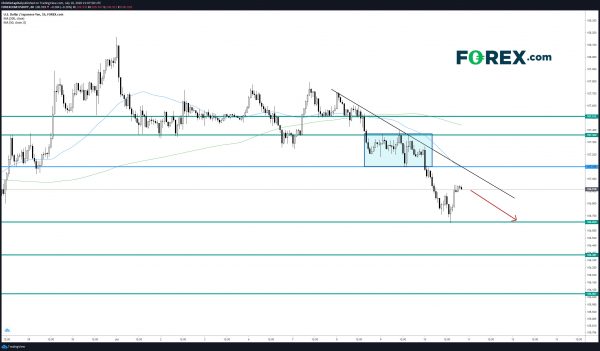 It was a relatively quiet U.S. trading session in the Forex market on Friday.

The US Dollar was mixed against all of its major pairs on Friday.

On the economic data front, the Producer Price Index Final Demand unexpectedly fell 0.2% on month in June (+0.4% expected), from +0.4% in May.

On Monday, the Monthly Federal Budget Deficit for June is expected to be released.

The Euro was bullish against most of its major pairs with the exception of the JPY. In Europe, there was no major economic data released.

The Australian dollar was bearish against all of its major pairs.

Looking at today’s largest mover, the USD/JPY might have started a new downtrend capped by a declining trendline after prices broke below a consolidation zone. If 107.10 can hold as key resistance we may see further pressure down to retest 106.65 support. A break above 107.10 would call for a rebound towards 107.36 resistance.