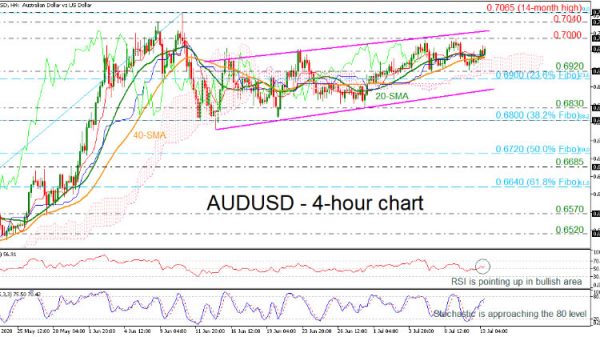 AUDUSD has been consolidating since June 16 and has been stuck in a channel tilted slightly to the upside. The neutral to bullish picture in the short term looks to last for a while longer after prices failed to break above the upper channel earlier this month.

Resistance was met at around the 0.7000 psychological region after prices surpassed the simple moving averages (SMAs) and the Ichimoku cloud. The slightly bullish bias in the near term is supported by the deterioration in the momentum indicators. The %K line of the stochastic oscillator has risen towards overbought levels, while the RSI is rising with weak momentum above the 50 line.

If prices continue to head higher, resistance should come from the 0.7000 handle near the upper level of the channel. A rise above the aforementioned line and subsequently the 0.7040 level would reinforce the short-term bullish view and open the way towards the 14-month high of 0.7065, which has been a major resistance area in the past.

To sum up, a strong bullish tendency could be created only if there is a clear climb above 0.7065. On the other hand, a tumble beneath 0.6800 could shift the bias to bearish.