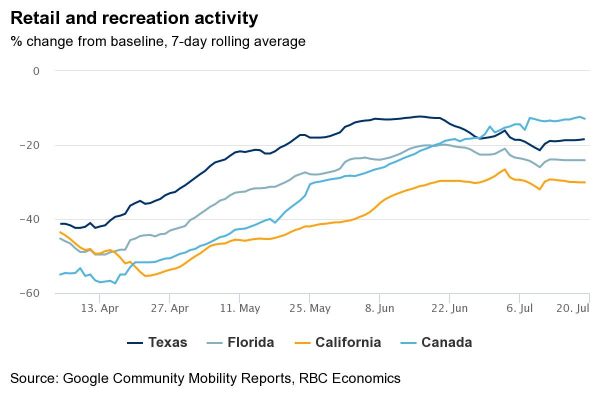 The US will almost certainly report an unprecedented decline in Q2 GDP in the week ahead – we are expecting a 35% annualized drop in the quarter. But the economic backdrop looked decidedly less-bad at the end of the quarter than it did at the beginning in April when virus containment measures led to eye-popping declines in a wide swath of sectors. By our count, personal spending volumes (which account for almost 70% of US GDP) were probably about 3% shy of year-ago levels in June – not exactly good, but better than the 16% year-over-year drop in April. Indeed, if spending just held at those June levels, the increase in spending in Q3 versus Q2 would be more than 30% at an annualized rate.

The big question is still whether those spending levels can be sustained going forward given the resurgence of virus spread, and reintroduction of some containment measures in some hotspots. New jobless claims from last week rose for the first time in 16 weeks, and early data suggests that shopping traffic has slowed in places like Florida, Texas, and California.

Ongoing negotiations between the White House and Congress on another round of economic stimulus measures, including added income supports for those suffering COVID-related work disruptions, will also be a key determinant of near-term growth.

For now, we continue to expect that, notwithstanding the obvious human toll from rising deaths, the economic impact of the latest round of virus spread will be to stunt the pace of recovery in Q3 and beyond rather than push the economy back down to those unprecedented Q2 lows. But downside risks have not gone away.

Canadian economic reports for the early recovery period have also continued to look a little better-than-expected – but, critically, without the same level of escalation in virus spread as south of the border (notwithstanding a creep higher in some regions in Canada as well in recent weeks.) Data to-date has left May GDP tracking a little stronger than the 3% increase Statistics Canada estimated a month ago. Our own call for next week’s GDP report is +5%.

And early advance data has pointed to stronger growth in June, with both manufacturing and retail sales growing faster than in May. Home resales were back above year-ago levels in June, and up 63% from May. Domestic air travel recovered to almost 80% of pre-COVID peak by early July (although international air travel remained very depressed.)

Some of the initial bounce-back in Canada – particularly in the housing market – probably reflects the release of pent-up demand generated during the lockdown. Unprecedented income supports have also helped prop up near-term household purchasing power. Payments from CERB alone looked larger than total wage losses through the downturn in April, and we expect to see more of the same in May payroll employment and wage numbers in the week ahead.

The threat of a resurgence in virus spread will still limit the amount that the economy can recover over the second half of this year – and activity in the oil & gas sector still looks exceptionally soft. We still expect GDP to be more than 5% below year ago levels, and the unemployment rate elevated, in Q4. But there is some scope for Canada to outperform the US in the very near-term provided virus spread can remain relatively well contained.