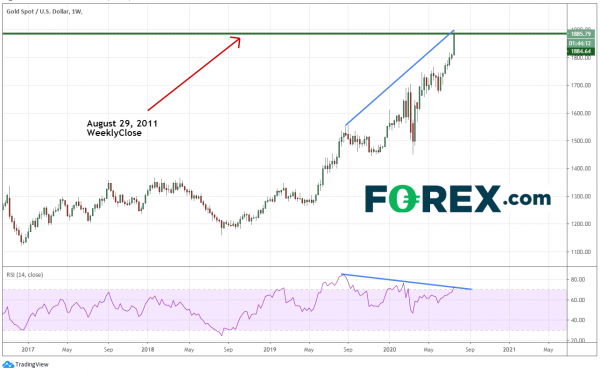 10% of companies in the S&P 500 will release earnings this week.  Big tech names, such as AAPL, FB, AMZN, and GOOG, will also continue to roll out results.  We will also finally get our first look at the one data piece which traders have been waiting months for: Q2 GDP!  The US Federal Reserve Interest Rate meeting will take place on Wednesday, though no changes are expected. However,  as coronavirus cases continue to move higher, traders will watch to see how this affects the Fed’s forward guidance.  UK-EU Brexit negotiations will take a breather as both sides say they are still far apart.  China-US relations continue to deteriorate, though both say they are committed to Phase One of the Trade Deal.  It should be a busy week going into month-end!

Unfortunately, the same can’t be said for the UK-EU Brexit talks.  Meetings broke last week with both sides admittingly still far apart in negotiations.  Each side is blaming the other for not showing a seriousness in negotiations.  At the core of the disagreements are the so-called “level playing field” and the fisheries.  Although an agreement will not be reached by the Johnson (self-declared) deadline at end of July, talks are set to continue with both sides hoping an agreement will be reached in September.

This week, the fiscal package that will be worked on will not be in the EU, but rather in the US.  The House controlled Democrats already agreed on a package a few weeks ago.  However, now the White House and the Republican controlled Senate are working on a plan of their own to present, worth roughly $1 trillion.  At the crux of the negotiations are the extension of federal unemployment benefits (which are set to expire on July 31st) and the payroll tax savings, which Trump is pushing for.

Not to be left out this week is the US Fed Interest Rate Decision.  Unchanged is expected, however the focus will be on the statement and the press conference to follow.  Traders will be interested to see whether the Fed is concerned with the uptick in coronavirus cases since their last meeting.  And if so, how concerned they are, and what will they do about it?

Big tech began reporting earnings last week.  The focus was primarily on the guidance. The stock market and the US Dollar were not happy that Microsoft is forecasting slower cloud growth or that Intel is expecting a delay in next generation of chips.  As previously mentioned, this week brings a plethora of earnings data, which once again include some big tech firms.  These include FB, PYPL, AMZN, AAPL, and GOOG. Additional earnings due out this week are MMM, AMGN, V, BA, GE, GM, F, MA, XOM,  and CAT.

Global Manufacturing flash PMI’s were better than expected for most of the world last week!  Most of  the PMI’s were above 50, indicating economies are back in expansionary territory.  However, the surveys were done before the large spikes in coronavirus cases in the US and Australia.  It will be interesting to see the final results for July when they are released in early August.  With end of month this week brings a plethora of data, including the first look at Q2 GDP.  Although this is obviously a backward-looking number,  the world is curious as to just how bad things were during Q2. Perhaps an even more important data point released this week will be US initial claims. As coronavirus cases have accelerated over the last few weeks in the US,  the number of initial jobless claims have leveled off near 1.4 million (yikes!), after pulling back from 6.867 million in early April.  If the number of coronavirus cases continue to increase and initial jobless claims begins to grow, this would be extremely negative for the US economy.  Additional economic data releases are as follows:

Spot Gold had its highest weekly close EVER last week at 1885.79 taking out the highs from August 29th, 2011 at 1883.10 (futures closed at all time highs as well).  Gold had been slowly drifting higher since the pullback in March, however as stocks pulled back this week, precious metals shot higher.  Gold closed up 4.25% this week.  Our “Chart of the Week” from last week, silver, closed up 17.72%!!  The S&P 500 was only down -0.3%, however the weekly candle is a shooting star, a reversal candle.  The RSI on the weekly gold chart has been diverging on the weekly for almost a year.  Although a pullback is possible,  it should not be used alone to gauge reversals in such a strong market.  Watch for further strength over the next few months, especially if stocks move lower!

Have a great and safe weekend and remember to always wash your hands!