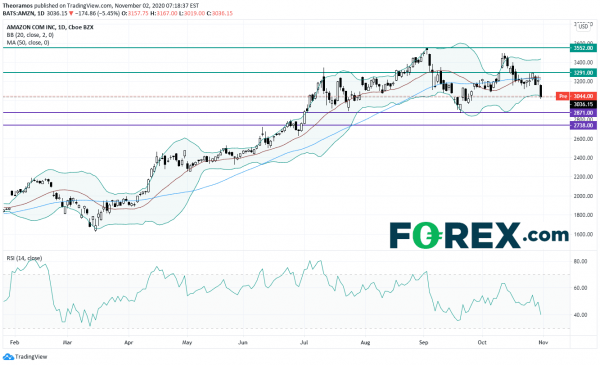 The S&P 500 Futures are posting a rebound after they in the red again on Friday. Investors became cautious ahead of the Nov. 3 presidential election, and remained concerned over the record-breaking Covid-19 cases around the world.

European indices are on the upside. British Prime Minister Boris Johnson has announced England will enter a second national lockdown from Thursday until December 2. Research firm Markit has published final readings of October Manufacturing PMI for the eurozone at 54.8 (vs 54.4 expected), for Germany at 58.2 (vs 58.0 expected), for France at 51.3 (vs 51.0 expected) and for the U.K. at 53.7 (vs 53.3 expected).

Asian indices closed in a strong up move.

WTI Crude Oil futures remain under pressure. The total number of rotary rigs in the U.S. rose to 296 as of October 30 from 287 in the prior week, and rigs in Canada increased to 86 from 83, according to Baker Hughes.

Gold slightly rebounds while the U.S dollar consolidates before U.S presidential election and as COVID-19 cases continue to surge.

Apple (AAPL), a tech giant, was ordered to pay security software company VirnetX Holding Corp 503 million dollars in a security patent trial by the jury in Tyler, Texas, according to Bloomberg.

Amazon.com (AMZN)’s, the e-commerce giant, price target was raised to 3,900 dollars from 3,800 dollars at Independent Research. Wynn Resorts (WYNN), a luxury resort and casino company, was upgraded to “overweight” from “equalweight” at Morgan Stanley.

Marathon Petroleum (MPC), one of the largest U.S. oil refiners, reported third quarter sales down 44% to 17.55 billion dollars, below estimates. LPS was 1.57 dollar, beating expectations, vs an EPS of 1.66 dollar a year earlier.