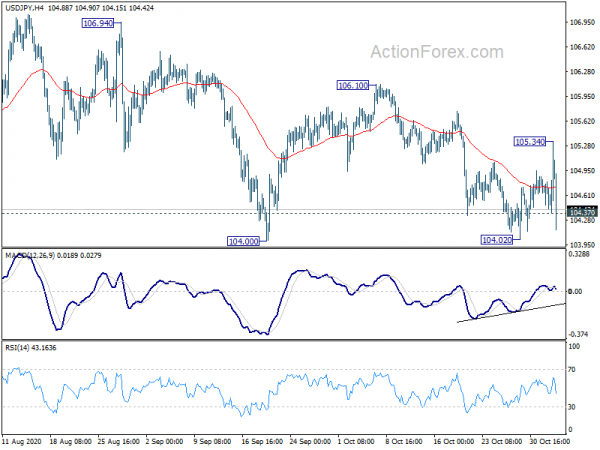 Volatility continues today as US Presidential election vote counts are released. The final results are unknown at this point, narrowed down the results of just a few states. At the time of writing, Yen is the stronger one, followed by Swiss Franc. Sterling and Kiwi are the weaker ones. In other markets, European indices are generally higher while NASDAQ future is posting strong gain. US 10-year yield is notably lower, trading below 0.8 handle. Gold is back above 1900 but hesitates to extend gains.

Technically, USD/JPY’s focus is back on 104.00 support after sharp intraday reversal. Sustained break there will resume the larger fall from 111.71. That could be a sign of risk aversion, or falling treasury yield, or selloff in Dollar. We’ll see how the pair interacts with other instruments. 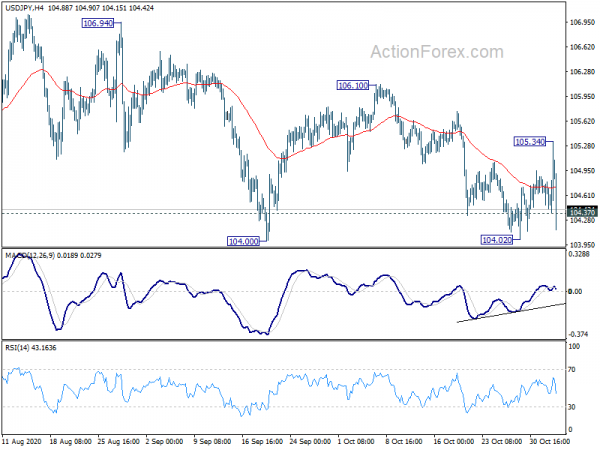 US ADP employment grew only 365k, well below expectation

“The labor market continues to add jobs, yet at a slower pace,” said Ahu Yildirmaz, vice president and co-head of the ADP Research Institute. “Although the pace is slower, we’ve seen employment gains across all industries and sizes.”

Also released trade deficit narrowed to USD -63.9B in September, small than expectation of USD -64.2B.

Canada trade deficit widened slightly to CAD -3.3B, larger than expectation of -2.2B.

Tim Moore, Economics Director at IHS Markit: “October data indicates that the UK service sector was close to stalling even before the announcement of lockdown 2 in England… November’s lockdown in England and a worsening COVID-19 situation across the rest of Europe means that the UK economy seems on course for a double-dip recession this winter and a far more challenging path to recovery in 2021.”

Chris Williamson, Chief Business Economist at IHS Markit said: “With lockdown measures being tightened, it is becoming increasingly hard to see how the eurozone economy will avoid falling back into decline, especially as some countries, including France, Italy and Spain, are already contracting again. Only in Germany has the strength of the manufacturing sector countered the renewed downturn in service sector activity, leading to increasingly polarised economic trends among the euro area’s member states. However, for all countries the outlook has grown increasingly dark.”

Wang Zhe, Senior Economist at Caixin Insight Group said: “Overall, as the domestic epidemic situation stabilizes, recovery remained the main economic theme…. The development of the epidemic in Europe and the U.S. is still an uncertain factor affecting economic trends. In the coming months, a continued recovery of the Chinese economy is highly likely, but it is necessary to be cautious about the normalization of monetary and fiscal policies in the post-epidemic period.”

New Zealand unemployment rate jumped to 5.3% in Q3, up from Q2’s 4.0%, but was slightly better than expectation of 5.4%.The 1.3% jump was the biggest quarterly increase on record. Labor force participation rate rose 0.2% to 70.1%. Employment dropped -0.8% over the quarter, matched expectations. 37k more New Zealanders were unemployed, bringing the total to 151k, highest in eight years.

“We are continuing to see the economic effects of COVID-19, and its associated border and business closures,” labour market and household statistics senior manager Sean Broughton said. “Last quarter’s low unemployment rate of 4.0 percent was explained in part by people’s inability to be ‘actively seeking’ and available for work during the national lockdown that was in place for much of the quarter. This quarter’s increase in unemployment reflects a return to more normal job-hunting behaviours.”

AiG Performance of Construction Index rose to 52.7 in October, up from 45.2. It’s the first expansionary result since August 2018. 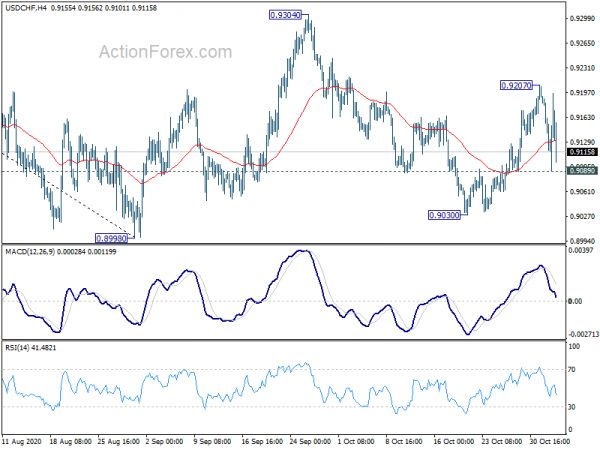 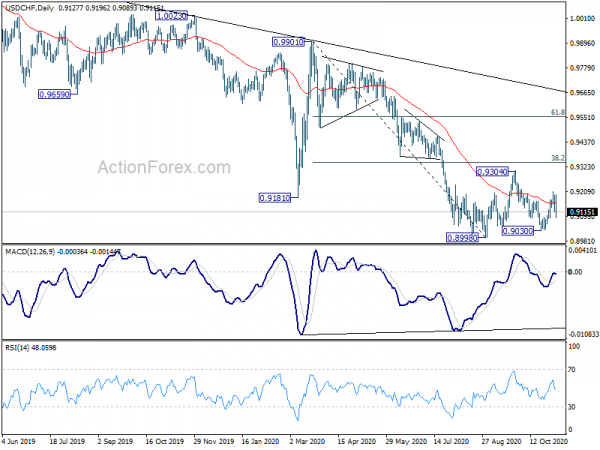