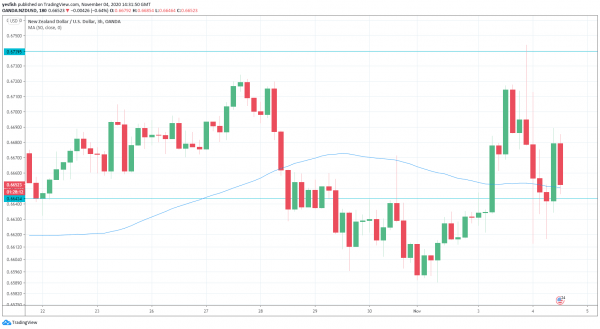 The New Zealand dollar is showing strong volatility in the Wednesday session. Early in North American trade, the pair is trading at 0.6669, down 0.40% on the day.

On Tuesday, NZD/USD recorded sharp gains, climbing 0.95%. The volatility has continued on Wednesday, but the pair has shown strong swings in both directions. In the Asian session, NZD/USD touched a daily high of 0.6744, its highest level since September 21st. However, the pair was unable to consolidate at these lofty levels and has retreated.

Ahead of the US election, the polls were pointing to a decisive victory for Democrat Joe Biden over President Donald Trump. The Democrats were expected to win big in Congress as well, leading to growing speculation that the election would result in a blue tidal wave, with the Democrats capturing the presidency, House of Representatives and the Senate. This led to a buying frenzy on Tuesday, which saw commodity-based currencies like the New Zealand dollar post sharp gains against the hapless US dollar. However, the blue wave has failed to materialize, with the presidential race hinging on the counting of mail-in ballots in several key states. President Trump has already said he will go to the Supreme Court to contest the election, and the results could be delayed by recounts in states where the vote is extremely close. The US Senate race is a dead heat and it remains unclear which party will emerge victorious. The talk of a blue wave has been replaced by concerns over the uncertainty of political gridlock in Washington. This has resulted in volatility in the financial markets, and the New Zealand dollar has exhibited sharp swings of close to two percent on Wednesday.

New Zealand often releases key figures on a quarterly basis, magnifying the impact of each release. In the third quarter, the number of people employed fell by 0.8%, after a decline of 0.4% in the previous quarter. This was slightly weaker than the forecast of -0.7%. As expected, the unemployment rate climbed from 4.0% to 5.3 per cent. The soft job numbers have weighed on the New Zealand currency and reflect the economic downturn due to Covid-19. Although New Zealand has only had a small number of Covid-19 cases, the economy has been hit hard by the global slowdown, with the export and tourist sectors severely curtailed. 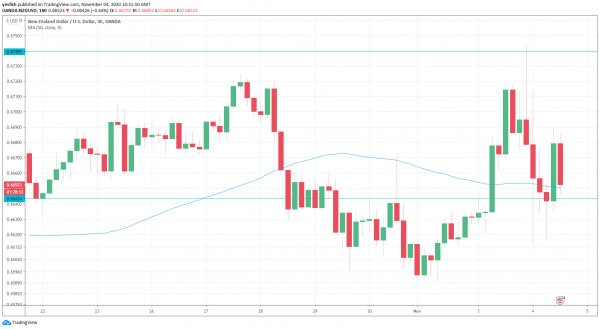 Strong volatility has seen NZD/USD test both support and resistance lines on Wednesday.