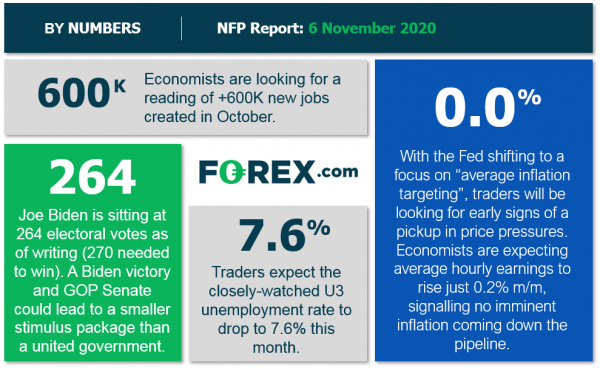 While the American public remains enamored with a Presidential election that just doesn’t seem to end, the rest of the financial and economic world continues to turn. In addition to the Federal Reserve’s monetary policy meeting later today, the always highly-anticipated Non-Farm Payrolls report is scheduled for release tomorrow morning.

With the election (currently, subject to additional vote counting, elections, and litigation, etc) pointing to a potential Biden White House while the Senate may remain in Republican control, hopes of a massive $2.5T stimulus package are falling. At the same time, the country just set a record with well over 100,000 new COVID-19 cases yesterday, which could put a damper on hiring activity moving forward. In other words, the US labor market’s improvement may continue to slow as we move toward 2021. As regular readers know, there are four historically reliable leading indicators that we watch to help handicap each month’s NFP report:

As we’ve noted repeatedly over the last few months, traders should take any forward-looking economic estimates with a massive grain of salt given the truly unparalleled global economic disruption as a result of COVID-19’s spread. That said, weighing the data and our internal models, the leading indicators point to a potentially worse-than-expected reading from the August NFP report, with headline job growth potentially rising by “just” 400-500k jobs, though with a bigger band of uncertainty than ever given the current state of affairs

Regardless, the month-to-month fluctuations in this report are notoriously difficult to predict, so we wouldn’t put too much stock into any forecasts (including ours). As always, the other aspects of the release, prominently including the closely-watched average hourly earnings figure, will likely be just as important as the headline figure itself.

See wage and job growth scenarios, along with the potential bias for the U.S. dollar below:

When it comes to the FX market, the events of the past week have taken the US dollar against its major rivals to test, and in some cases, break below, its lows seen in October. If we see a weaker-than-anticipated jobs report (either on a headline basis or in the average hourly earnings figures), readers may want to consider short trades in USD/JPY, which has broken strong previous support in the 104.00 area and now has little in the way of technical support until closer to 102.00. Conversely, if we see a strong jobs report, traders may prefer short positions in EUR/USD, which is testing previous resistance in the mid-1.1800s after surging more than 200 pips over the last 48 hours.