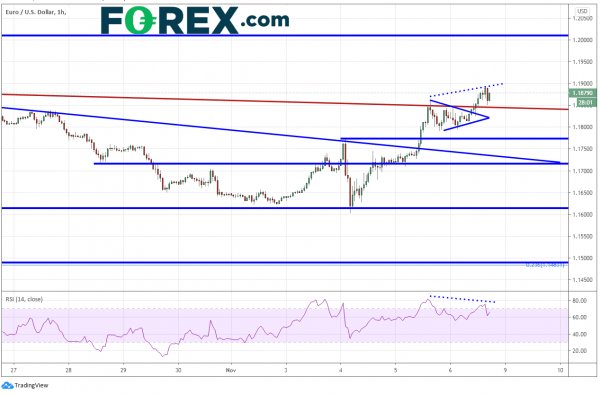 US Dollar pairs may still see some volatility ahead as the election winner is announced and results are contested.

As reports are now suggesting that Pennsylvania and Georgia have flipped from Trump-leading to Biden-leading, it’s becoming more and more apparent that Joe Biden will win the Presidential Election.  With the US Dollar tanking over the last few days, perhaps there may be a ‘But the rumor, Sell the fact” play or just plain profit taking ahead of the weekend in USD pairs.  Some levels to watch are below:

On a 60-minute timeframe, EUR/USD has broken out of a symmetrical triangle and is testing the October 21st highs near 1.1880.  A close above would clear the way for a move up to the September 1st  highs at 1.2010.  Support is now at the downward sloping trendline (red line) from the September 1st highs near 1.1872 and the trendline from the short-term symmetrical triangle near 1.1825.  Note that the RSI is diverging from price,  so a pullback may be coming shortly. As we discussed yesterday, some of the Yen pairs may have been ready for a bounce. USD/JPY has held the 161.8% Fibonacci extension from the lows of October 29th to the election night highs near 103.25.  After a false breakdown below the downward sloping trendline (red line) from May, price busted higher out of a very short-term channel and tested a downward sloping trendline from October 21st.  That level, 103.71, now acts as resistance.  Above there are the previous lows from October 29th near 104, then horizontal resistance near 104.20.  Support is at the day’s lows of 103.17, but the pair can fall quickly from there towards 102 and the March lows near 101.18. After testing resistance near .7275, AUD/USD pulled back into the resistance area (now support) as the RSI was diverging from price.  However, now that the RSI is back in neutral territory, it looks like the pair may be ready for another run higher out of a flag pattern.   A strong stock market is good for commodity currencies, so if stocks hold up, so should the Aussie (and Kiwi, which is in breakout territory).  The target for the flag pattern is .7390, near the August 31st  highs at .7410.  It must close above the flag and horizontal near .7285 on a 60-minute timeframe before it can move to target. If price falls below the  .7250 support zone, next support is .7225, then horizontal support near .7150. US Dollar pairs may still see some volatility ahead as the election winner is announced and results are contested.  Watch the mentioned levels in the short-term for possible areas to “take action”.