RBNZ Set To Launch New Lending Programme, Negative Rates May Have To Wait 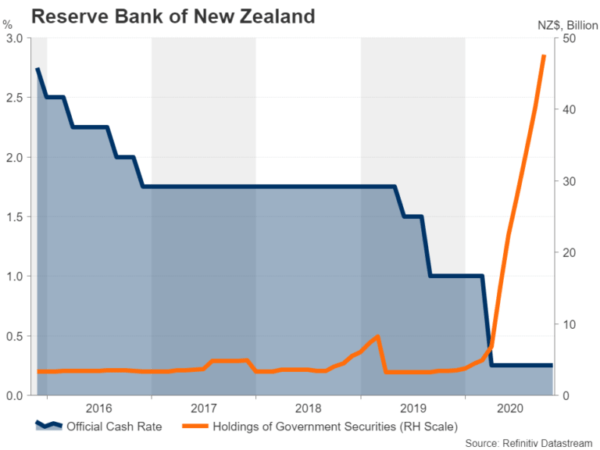 The Reserve Bank of New Zealand is due to announce its latest policy decision on Wednesday (01:00 GMT) and will present its updated forecasts in the Monetary Policy Statement to be published at the same time. New Zealand’s economic prospects have started to turn up lately as the country emerges from a second nationwide lockdown. But uncertainty about the global outlook and a soaring local dollar mean the central bank is far from done in its easing cycle and is expected to launch a new cheap lending programme for banks.

Negative rates on the table, just not yet

The economic crisis brought on by the coronavirus pandemic has forced the RBNZ down the road of quantitative easing (QE) that not even the global financial crisis of 2008-09 was able to do. But the RBNZ has not only embraced QE, it now has one of the most aggressive bond buying programmes among the major central banks, following its decision in August to add another NZ$100 billion to its Large Scale Asset Purchase (LSAP) programme.

Yet, the RBNZ is clearly not taking any chances and continues to make plans for averting further economic disaster. Top of the list of the new tools it is considering are negative interest rates. But even though the Bank has strongly indicated a preference for lowering the official cash rate (OCR) to below zero, it is not in a hurry to do so and has stuck to its earlier commitment of keeping the OCR at 0.25% at least until March 2021.

What is likely to be introduced in the near term, however, is another tool that the RBNZ has been flagging lately, and that is a Funding for Lending Programme (FLP). A lending scheme designed to provide cheap loans to banks to boost borrowing for Covid-struck businesses is highly anticipated to be unveiled on Wednesday.

Such a programme would come as a welcome relief for the small Pacific trade-dependent economy where borders remain shut to much of the outside world. Without further assistance, many firms, especially those in the hard-hit tourism sector, will find it increasingly difficult to stay afloat. However, it’s not all doom and gloom as the government’s successful handling of the coronavirus outbreak has allowed most parts of the economy to reopen again following a second round of strict restrictions that ended a month ago.

The Ardern government’s swift but tough response to the discovery of new virus clusters may be paying off as New Zealanders are now free to get around with few social distancing curbs in place. The return to near normality for many businesses, combined with the fact that the recovery in New Zealand’s main trading partners in Asia is also gathering pace, bodes well for GDP growth in the upcoming quarters after the projected wobble in Q3 due to the second lockdown. Rising business confidence underscores the improving mood.

However, the brighter outlook has led some investors to pare back their expectations that negative interest rates will be required. The latest positive news around Covid vaccines is adding to these doubts and rate cut expectations have eased slightly during November. Still, the market odds of the OCR turning negative by next Spring remain high and the FLP is widely seen as a vital step towards this shift as it would facilitate the better transmission of lower rates to the broader economy.

Hence, the FLP is a necessary preparation for negative rates whilst having the potential to lessen the need for such a policy in the first place if it aids the recovery. The problem, however, for the RBNZ is that it has other things to worry about as well, mainly, the strong exchange rate.

The post-US election risk rally has spurred the New Zealand dollar to 19-month highs versus its US counterpart, as, apart from the end to the election uncertainty, Joe Biden’s win in the race to the White House is seen as a positive outcome for world trade, as the Democrats are likely to reverse much of Donald Trump’s protectionist policies.

If the risk-on theme endures for the next few days, the RBNZ’s expected decision to start a lending programme for banks and maintaining an easing bias are unlikely to curtail the kiwi. Having just shot up above $0.68, kiwi/dollar could soon be eyeing the $0.69 mark. Further upside could push the pair towards the 123.6% Fibonacci extension of the January-March downtrend at $0.7059.

However, policymakers might not be too happy about letting the kiwi run wild and the use of stronger language to warn about the impact on exports from a rising currency could knock back the kiwi. Another risk of course is if the RBNZ were to sound much less optimistic than recent data and even its own forecasts were to suggest, implying that there’s been no change to its very dovish stance.

Kiwi/dollar could then suffer a pullback, falling to just above the $0.67 level. Sharper declines would turn attention to the $0.66 support and the 78.6% Fibonacci retracement of $0.6480.