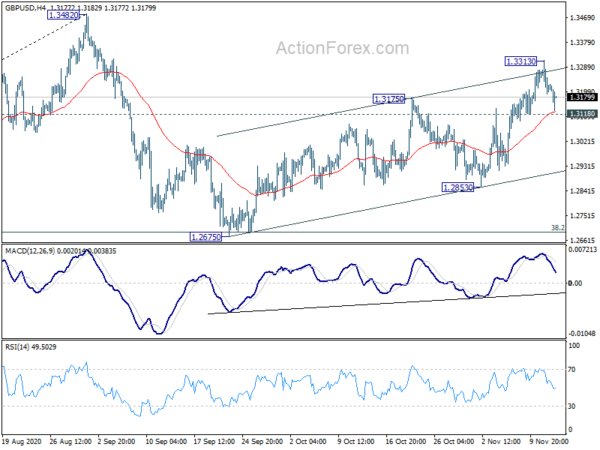 Sterling suffers notable selling today after slightly weaker than expected Q3 GDP data. Though, pull back against Euro could be a bigger driver for the profit-taking. Elsewhere, better than expected US job data and worse than expected Eurozone production data were generally ignored. For now, Aussie is following the Pound as the second weakest, then commodity currencies. Euro is surprisingly the strongest one, followed by Swiss Franc and then Yen.

Technically, EUR/GBP recovered notably after breaching 0.8866 key near term support. GBP/USD also retreated after hitting near term channel resistance. Is the Pound’s rally finished? We’ll keep an eye on 0.9068 minor resistance in EUR/GBP and 1.3118 minor support in GBP/USD. Break of these levels would likely flip Sterling’s momentum to the downside for short term.

In the monthly Economic Bulletin, ECB said ‘the resurgence in coronavirus (COVID-19) infections presents renewed challenges to public health and the growth prospects of the euro area and global economies… the associated intensification of containment measures is weighing on activity, constituting a clear deterioration in the near-term outlook.”

It’s also reiterated that new round of macroeconomic projections in December ” will allow a thorough reassessment of the economic outlook and the balance of risks”. On that basis, ECB will “recalibrate its instruments, as appropriate, to respond to the unfolding situation”.

EU industrial production was unchanged in the month. Among Member States, for which data are available, the largest decreases were observed in Italy (-5.6% mom), Ireland (-4.7% mom) and Portugal (-3.8% mom). The highest increases were registered in Czechia (4.1% mom), Slovakia (3.4% mom) and Poland (3.1% mom).

Also from UK, goods trade deficit widened slightly to GBP -9.3B in September versus expectation of GBP -8.8B.

BoE Governor Andrew Bailey said he didn’t have a “precise date in mind” regarding when to publish the findings regarding the consultation with banks on interest rates. “There’s a great deal of work we have to do with the banks, particularly to work out what’s doable and what needs to be fixed,” he added.

Also, in the current environment, policymakers were “talking about all the tools that could possibly be in the box”. But for the UK, “UK, there isn’t a great call, I think at the moment, for doing more yield curve control at the short end… so I don’t think it’s something that I would see frankly a great need for at the moment.”

Bank of Japan board member Seiji Adachi said in a speech that it’s “difficult to envision a post-COVID-19 economy, at least