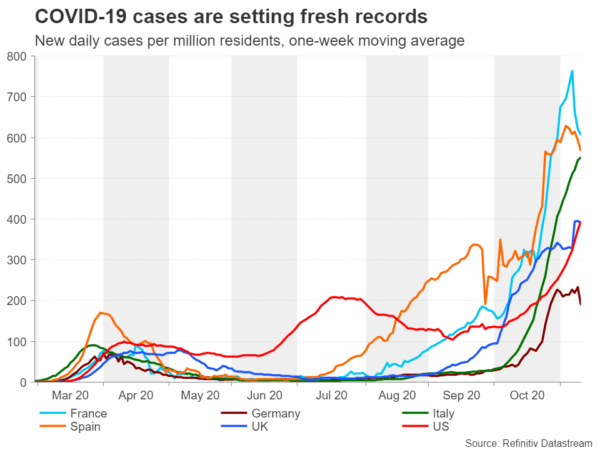 Stocks around the world skyrocketed on news this week that the Covid-19 vaccine being developed by Pfizer and BioNTech is more than 90% effective in protecting against the virus. That’s a very impressive number when considering that it’s much higher than the most optimistic expectations and even more so when comparing it to flu vaccines, whose effectiveness is thought to be a lot lower at between 40-60%. Hence, it would be fair to say that the euphoria in the markets is fully justified. However, all is not as it seems in the equity world and just as there were winners and losers in the initial ‘lockdown rally’, the same appears to be true in the vaccine-led rally.

News that a vaccine could begin rolling out before the year-end couldn’t have come at a better time for Northern Hemisphere countries, who generally have done a poor job of handling the coronavirus outbreak and are now facing a bleak winter amid an escalating second wave. Many European economies are now expected to shrink in Q4 as fresh restrictions are imposed. The US is also once again reporting a record number of daily new infections and there are signs that the recovery there is losing some momentum. 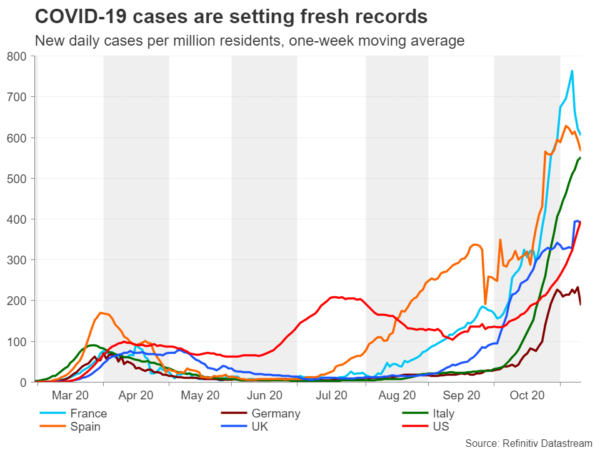 The vaccine breakthrough isn’t likely to change this gloomy near-term picture and it seems inevitable that more economic pain will have to be endured before mass vaccination programmes become reality. But whilst there are still a few hurdles that need to be overcome before Pfizer/BioNTech’s vaccine completes its clinical trials and receives regulatory approval, there is little doubt that a highly effective vaccine is just around the corner, with other vaccine developers also expected to make their own announcements in the next few weeks.

So with investors now looking past the impending dark winter, the question is, which stocks stand to gain the most from a post-pandemic world? When much of the planet went into lockdown in March, it was the stay-at-home companies that benefited the most from the stimulus-induced rally that followed the market crash at the onset of the pandemic.

These not just included tech stocks like Netflix, Amazon.com and Microsoft with already massive online offerings but newcomers to the scene such as Zoom, whose videoconferencing platform became a must-have for professionals working from home. Other businesses that saw a surge in demand include food outlets that provide home delivery services and makers of home exercises kits, as well as manufacturers of cleaning products.

Can tech shares maintain their uptrend?

But how sustainable is this trend? When tech-heavy stock indices like the Nasdaq 100 and Nasdaq Composite outperformed the rest of the market once equities began to rebound from the March sell-off, it didn’t come as too much of a surprise given the overnight switch to doing everything remotely. What was unforeseen, however, was the sheer intensity of the rally as tech stocks exploded into record territory even as economic output around the world plunged by a record amount.

When the markets are awash with cheap money, strong fundamentals don’t come into it. But that’s where tech stocks differ because under a work-from-home and stay-at-home regime, the future for digital and online service providers is bright no matter how cataclysmic the situation has become for millions of other businesses. The unfortunate turn of events has transformed these once risky growth stocks into defensive stocks, compounding their appeal at a time of great economic uncertainty.

However, now that an effective vaccine is finally within reach, the tech darlings of 2020 might be about to lose their shine. As the saying goes: out with the old, in with the new. Except in this case, it’s more of a ‘out with the new and in with the old’, as it is the “old economy” stocks that are making a comeback.

The vaccine headline has sparked a rotation out of growth and into value shares. Stocks that had been left behind and trampled over in the unstoppable equity rally of the past 7-8 months are now finding a new lease of life. These are the companies that had been the worst hit from the pandemic, such as airlines, hotel & resort operators, and retailers with predominantly brick and mortar stores. 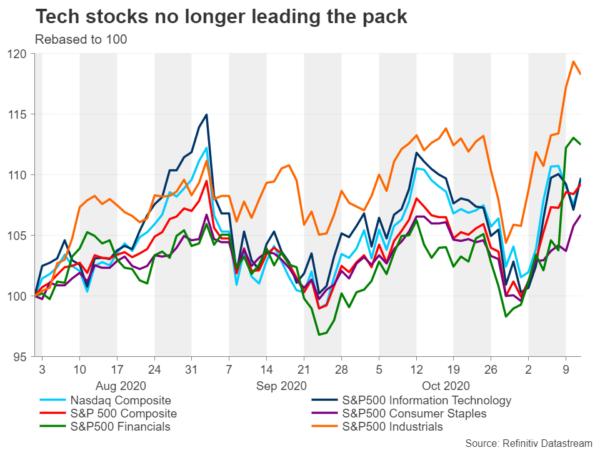 Although few are doubting that it will probably take several years for entire populations to be vaccinated and for social distancing curbs to be fully lifted, there is now a very bright light waiting at the end of the shortening Covid tunnel. Once mass vaccination programmes start, old economy stocks, comprising everything from industrials to consumer staples to financials, should enjoy further gains as people gradually return to their pre-covid habits and lifestyles.

The pull-out from the tech sector and defensive assets has already dealt a punch to the Nasdaq 100, which is down by 1.6% so far this week. While that may only be a fraction of its year-to-date gains, it trails badly to the 3.8% increase in the Dow Jones Industrial Average, which is made up mostly of traditional industrial companies. The broader S&P 500 was up a more moderate 1.8% as of Wednesday’s close.

The recalibration is even more evident in Europe where the FTSE 100 in London has soared by 8.0% and the Paris CAC 40 by almost 10% mid-week. Coincidentally, both the British and French economies are very services orientated and have struggled disproportionately under the weight of tighter restrictions, unlike in Germany, where the manufacturing-based economy has been able to stay relatively open. That explains why after leading the European rally, the Frankfurt DAX has underperformed its peers this week. 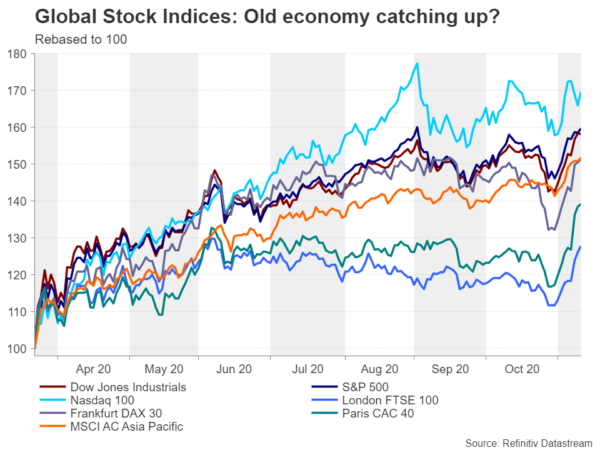 It’s a slightly different picture in Asia where the stock market rebound has been stronger as most countries in the region have been able to control the virus more effectively without having to resort to strict lockdowns. Now that a vaccine is close, Asian stocks have as much to gain as their economies benefit from the expected pickup in world trade.

Shift to digital is permanent

But where does this leave tech stocks? The correction that started this week shouldn’t have been too unexpected given the extreme valuations for many tech names on Wall Street, thus, there may be more losses to come. However, vaccine or not, the pandemic has set in motion changes that will likely outlast the coronavirus. It has accelerated the shift to online, whether it’s online learning, banking, shopping or working remotely. It has widened the use of technology such as contactless payment, as well as boosted technological advances in areas like robotics and of course in healthcare.

So, while traditional stocks see a bit of a revival over the next few weeks and months, there’s far too many significant developments taking place within the digital and cloud world for tech shares to fall completely out of favour, if at all. What will be important to watch, however, is how the stimulus story plays out in the coming months.

Waiting for the next stimulus check

For one, the US election outcome that has left Congress divided means a bipartisan deal remains the only way to go in approving a new virus relief bill. Hence, the next package is likely to be much smaller than what investors are hoping for. Further monetary stimulus is also not so certain as the Federal Reserve is showing some signs of being reluctant to go above its monthly cap of $120 billion in asset purchases.

The European Central Bank on the other hand is expected to beef up its purchases as early as next month. But again, there’s a danger that policymakers won’t live up to markets’ expectations in terms of what they will deliver.

In the absence of substantial fresh stimulus, the stocks that received the biggest boost from the avalanche of easy money are those that are at most risk of sharp corrections. To make matters worse for those growth stocks, long-term borrowing costs have started to creep higher. Long-dated government bond yields have jumped to multi-month highs on the vaccine news, as investors have turned more positive about the outlook, dumping safe-haven assets. 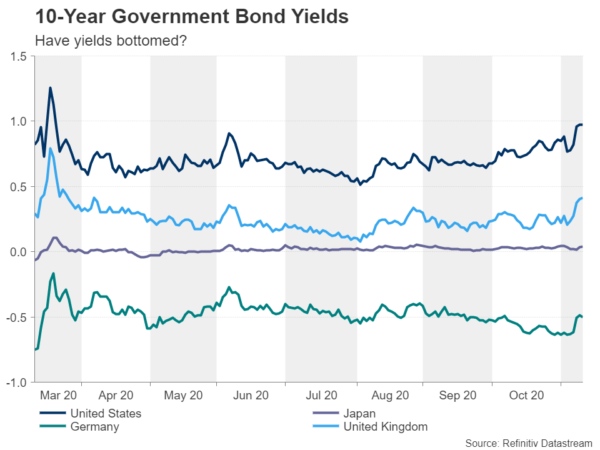 Without additional central bank intervention in the bond market, yields could continue to rise, making value stocks more attractive. Conversely, investing in expensive tech stocks becomes more questionable in an environment where money isn’t quite as cheap and abundant as it was when the rally took off.

The established tech giants that have strong revenue growth should be able to withstand any disappointment on the stimulus front. But the rotation away from the broader tech sector could enter a deeper and longer phase if vaccination moves far quicker than anyone anticipated, diminishing the need for further massive monetary and fiscal stimulus.