Week Ahead – Plenty of Data but Covid, Trump and Brexit Might Steal the Spotlight 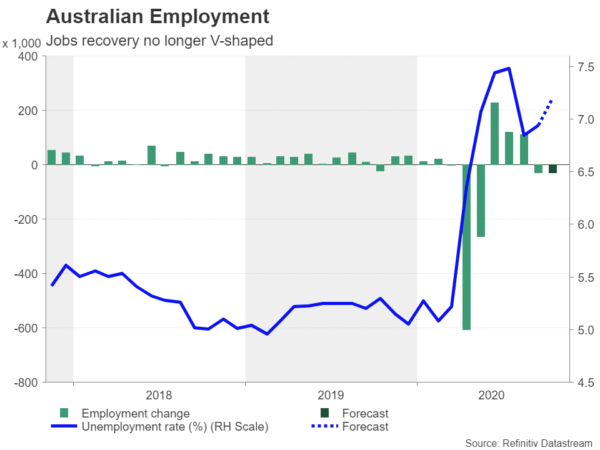 After the US election and vaccine frenzy, economic data will move to the forefront in the coming week, with inflation and retail sales comprising the bulk of the releases. However, investors might be wrong to assume that the election and virus storms are over as Trump steps up his legal fight to overturn Joe Biden’s projected win and as several states in America head towards new lockdowns. If all that fails to produce enough drama, there is always Brexit waiting in the queue to generate some excitement as the deadline for reaching a trade deal has been pushed back yet again until the end of next week.

Aussie data may not spur much reaction

The Reserve Bank of Australia sparked a new round of policy easing by global central banks when it expanded its quantitative easing programme and slashed rates to near zero at its November meeting. The minutes of that meeting are due on Tuesday, and while they may reveal whether policymakers are inclined to follow up those actions with further measures, the consensus view is that the RBA is likely done for now.

Hence, the slew of Australian releases in the coming days may struggle to see much reaction in the markets, with the local dollar taking its cues primarily from the risk-on, risk-off vibes. That’s not to say the data will be totally ignored as Thursday’s employment report and Friday’s preliminary retail sales numbers should shed some light on where Australia’s recovery stood at the start of the fourth quarter. 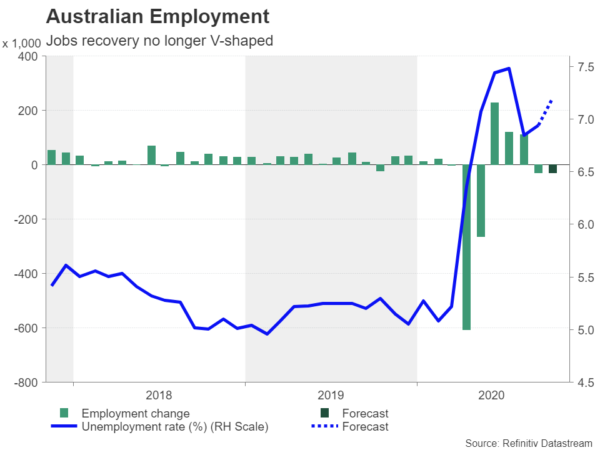 Progress in the economic recovery will also be under scrutiny in China where the monthly prints on retail sales, industrial output and fixed-asset investment are due on Monday. To the envy of its peers, China’s recovery is going from strength to strength, and while it wouldn’t set the world on fire, the pace of growth is nevertheless impressive given the extremely fragile global economic backdrop.

Retail sales growth accelerated sharply in September and that trend likely continued in October, with sales forecast to have risen by 4.9% year-on-year. However, industrial output is expected to have moderated slightly to 6.5%. 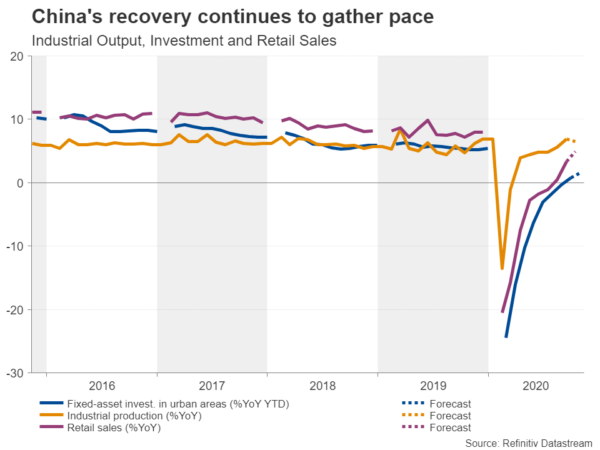 Meeting or beating those projections would underscore the steadily improving picture in China, giving global equities and the aussie a nudge higher.

Third quarter GDP numbers will kick things off in Japan on Monday, to be followed by October trade figures on Wednesday and the latest CPI readings on Friday. The flash November manufacturing PMI is also out on Friday.

The Covid-induced slump in Japan was somewhat milder than in other advanced countries but it should be pointed out that the economy was already in technical recession when the pandemic struck. The US-China trade war had a bruising impact on Japan’s exporters and that drag worsened in Q2. However, the reopening of economies around the world boosted exports in Q3 and Japan’s GDP is predicted to have rebounded by 4.4% quarter-on-quarter on the back of that. 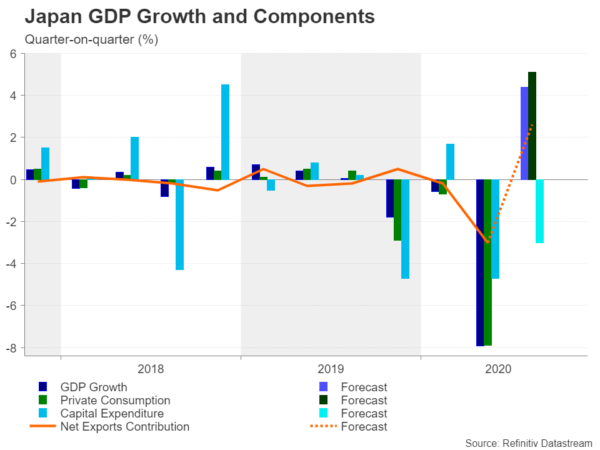 Even so, that would still leave economic output well below pre-pandemic levels, keeping the Bank of Japan on edge as it ponders whether to pull anything out of its depleted toolbox. Policymakers might get a helping hand, though, if the yen extends its slide of the past few days, especially against the US dollar, since the approach to the 100-yen level had even caught the attention of Prime Minister Suga.

But that slide, which was initiated by the positive vaccine headlines, may have already run its course, as the safe-haven yen is back in demand following a sudden deterioration in the virus data globally.

More Brexit turbulence for the pound

The inflation and retail sales theme will continue in the United Kingdom, with October CPI out on Wednesday and retail sales coming up on Friday. The latter is bound to be a bigger mover for sterling as Britain’s recovery lost significant steam in September and a poor showing in retail spending in October would suggest growth slowed further just prior to England going into lockdown. 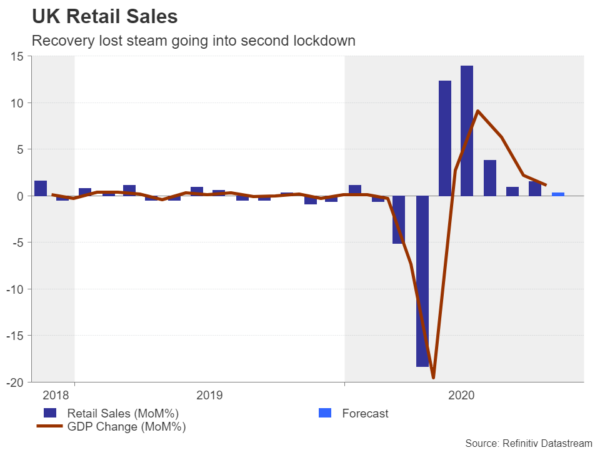 With GDP on a sure course to contract again in Q4, the pound is feeling the strain, pulling away from two-month highs versus the dollar. However, the grim short-term outlook might not matter much if UK and EU negotiators are able to strike a long-sought deal on a post-Brexit trade agreement. Despite intensified talks since mid-October, the two sides remain far apart on key issues such as fisheries and a level playing field, though some progress has been made.

But time is short as any deal would need to be ratified not just by the UK Parliament but by the parliaments of every EU member state before the transition period ends on December 31. The EU therefore sees the Council meeting on November 19 as the last reasonable date for a framework of an agreement to be thrashed out.

Realistically, though, it’s more than possible that this deadline will also pass with negotiators next eyeing a December date, keeping the pound stranded in the meantime.

The post-election sell-off for the dollar as it became clear that Biden will claim victory didn’t last long as virus jitters have resurfaced. The US has been setting fresh daily records of new coronavirus cases in recent days, prompting several states to tighten restrictions. If the virus escalation shows no sign of easing off in the coming days, the dollar is likely to continue its ascent as investors seek safety in the world’s reserve currency. 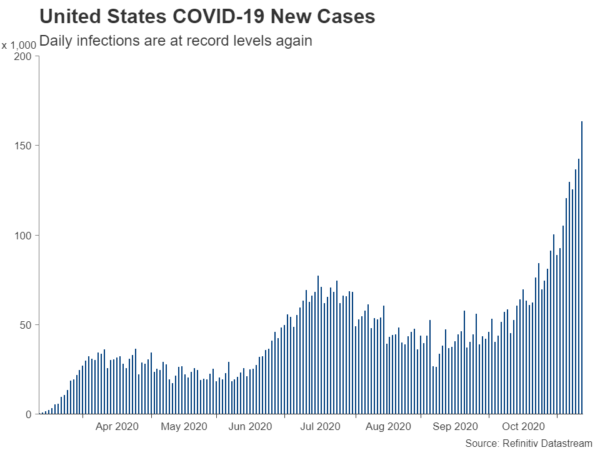 Another upside risk for the greenback is the threat of Donald Trump having some success with his legal challenges to contest the election outcome. In particular, lawsuits in six battleground states where the Trump campaign is seeking a recount or a delay in the results being certified will be monitored by investors. Any legal wins for Trump might raise doubts about the legitimacy of Biden’s win. However, the odds of Trump being able to overturn the results are very low and the main worry is that there won’t be a smooth transition to the White House for the new administration at a time when the country is facing a severe crisis.

If the dollar goes off the rails, next week’s data releases should provide some gravity as there’s a good chance they will underwhelm. October retail sales figures due on Tuesday will probably attract the most attention. They are forecast to have risen by 0.5% month-on-month, moderating from a 1.9% increase in the prior month. 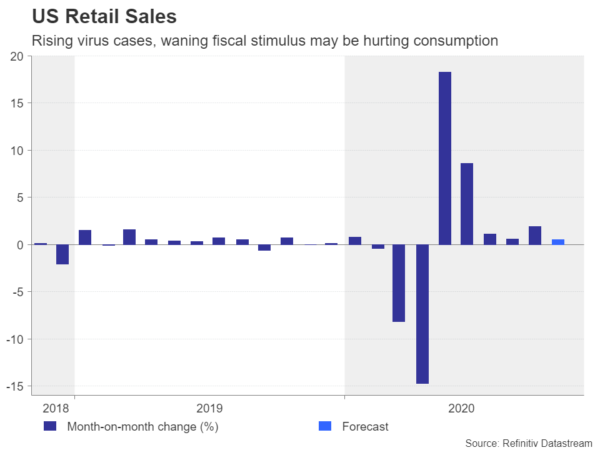 Industrial production is also out on Tuesday, while the housing sector will be in focus on Wednesday with building permits and housing starts for October, as well as existing home sales on Thursday. Finally, manufacturing surveys by the New York and Philadelphia Feds will be watched on Monday and Thursday, respectively.

Vaccine euphoria had lifted the Canadian dollar to two-year highs before the virus gloom set in again, underlining how the loonie is driven more by market sentiment and the economic outlook of its southern neighbour and biggest trading partner these days than by domestic factors.

Add to that the fact that the Bank of Canada is not expected to cut rates further and even wound back its quantitative easing program slightly at its October meeting, backward looking indicators such as the consumer price index and retail sales are not anticipated to be game changers for the currency.

Inflation numbers for October are due on Wednesday, to be followed by September retail sales on Friday.