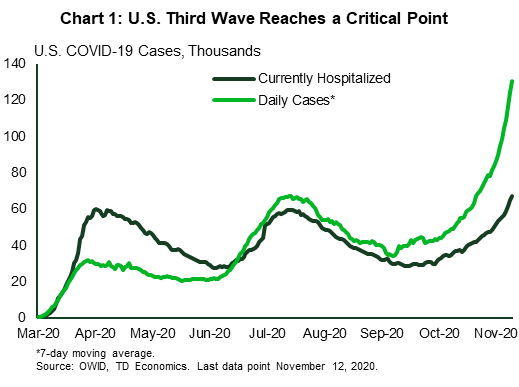 U.S. – President-Elect Biden Has His Work Cut Out For Him

Good news on the vaccine front cheered financial markets early in the week. However, as the week wore on and COVID-19 infections worsened, that optimism started to fray. Vice President Biden was also declared President-Elect Biden over the weekend after a record-breaking voter turnout. But there is no time for him to bask in his victory. The third wave has been building speed for more than a month now and has led to increased restrictions as hospitalizations reach a new peak nationally, and in many areas are reaching the breaking point (Chart 1).

Restrictions are generally more targeted than the spring, but some jurisdictions are taking strong measures. Chicago has issued a 30-day “stay-at-home” advisory and Detroit is closing schools for two months. Many school systems in big cities, including Chicago and Philadelphia did not reopen for in-person learning in the fall, and will now be keeping students out of the classroom longer. Overall, six districts that re-opened in-person learning in the fall have since reversed course.

We economists are trying to sort out how much these restrictions will curtail spending, and economic growth. The second wave of infections in the summer did not lead to as much of slowdown as first feared. However, there are a couple of reasons why there may be more of an impact now. First, the current surge is more widespread across the country. The “second wave” was really a first wave in many states that were not hard hit in the early spring. Other regions’ case counts remained low through the summer, and were still gradually re-opening their economies, helping to keep up momentum on a national basis. The current more extensive surge seems more likely to show up in the national data.

Second, in the summer surge, Americans had recently received relief checks and people who were unemployed were still receiving a generous $600/week extra in addition to their usual benefits. This boost to income helped to offset reduced activity in some sectors. That is no longer the case, and Democrats and Republicans in Congress are still far apart on the size of a package. The need to pass a spending bill to fund government beyond December 11th presents an opportunity to tack on a relief package, but it looks like a Hail Mary pass at this point.

Still, there is a good case for additional fiscal supports. October’s CPI report showed continued softening in core services inflation, which typically reflects economic weakness more so than goods prices do (Chart 2). With unemployment still elevated and the pandemic worsening, we expect inflation pressures to remain subdued for quite some time, keeping borrowing costs low for Washington.

So far, the deterioration in the high-frequency data is modest. Weekly credit and debit card spending have started to lose momentum and passenger throughput at U.S. airports has fallen modestly for two consecutive weeks. We will be watching the weekly data closely to gauge momentum at year end. The fourth quarter got off to a strong start, and right now we are tracking a 3.7% (annualized) pace, but risks appear tilted to the downside.

The COVID-19 pandemic was front and centre this week, injecting volatility into financial markets. Equities burst higher to begin the week, amid news that a COVID-19 vaccine being was found to be more than 90% effective and, if given the green light, could be in use by the end of the year. The TSX was up a sturdy 3% through Wednesday, before losing some steam later in the week, as surging COVID-19 cases in the U.S. and elsewhere curbed investors’ enthusiasm. For its part, WTI jumped about 8% this week (as of writing), lifted by the positive vaccine news and reports that OPEC+ may delay the tapering of its production cuts originally set for January (Chart 1).

Away from the markets, new COVID-19 cases surged to record highs in most provinces. However, the Atlantic Provinces managed to keep their case counts under control again this week. Meanwhile, per capita case counts continue to be the highest in Manitoba (Chart 2), maintaining a trend in place since around the beginning of the month. This is a nasty turn of events for the province, as the virus had been relatively contained for most of its duration. And, with cases skyrocketing, the entire province moved into the “red zone” this week, imposing restrictions similar to what was in place during the first round of lockdowns in April. The economic ramifications of this will likely be serious, perhaps more so for the retail industry, as it was in the process of staging a solid jobs recovery.

Manitoba wasn’t the only province to see tighter restrictions this week. In Quebec, new, more stringent restrictions were imposed in several jurisdictions. As a result, over 80% of the population is now under “maximum-alert” restrictions, which includes (among other measures) the closure of cinemas, libraries, bars, casinos and indoor dining in restaurants. Ontario also shifted to a new, colour-coded system on Saturday. So far, about 30% of the population will be in the “red zone” (i.e. one stage away from full lockdown) as of November 14. However, individual health units have the option of imposing more severe restrictions, and most places in the GTA have taken that extra step. Elsewhere, measures also were announced in B.C, Alberta and Saskatchewan.

The new restrictions will likely be most devastating to the arts/entertainment/recreation and accommodation and food services sectors. These industries have had the toughest hill to climb in terms of recouping the massive output and job losses endured so far during the pandemic. However, there are some factors that could mitigate the impact of these measures on Canadian economic growth. For one, employment levels in impacted industries are lower now than they were before (implying less room to fall). Also, not every province has imposed restrictions, and measures taken thus far are less severe than earlier in the pandemic. Finally, federal income supports will cushion the blow, and sectors beyond those directly impacted have thus far continued to recover. To this point, the October Labour Force Survey showed a 1% monthly job gain in industries not directly affected by restrictions imposed during that month. Still, these new measures, alongside the rapid rise in COVID-19 cases, suggest that November’s growth performance will be weaker.

Retail sales probably slowed in October, even with a boost from Amazon Prime Day—which was in July last year—and the release of a new iPhone—which was in September last year. Levels were likely still fairly high, however; the report mostly covers goods spending, which has recovered much more rapidly than services spending. We expect more pronounced weakening in November and December, reflecting the ongoing fading of fiscal stimulus, rising COVID cases and high seasonal adjustment hurdles.

TD looks for manufacturing sales to rise by 2.0% m/m in September, slightly above flash estimates for a 1.5% advance. Motor vehicles and other transportation products will provide a source of strength, consistent with solid export data and the highest reading on Canada’s manufacturing PMI since August 2018. Manufacturing was also a bright spot in the September LFS with a large (3.7%) increase in hours worked. Real manufacturing sales should see more modest gains than the nominal print.

Housing starts are expected to bounce back to a 225k annualized pace in October on stronger multi-unit construction. Multi-unit starts fell by 27% m/m in September for their largest drop in nearly 5 years without any meaningful decline in permit issuance. While this pace of development may prove unsustainable should immigration levels fail to recover going forward, we expect a partial rebound in multi-unit starts for October.

TD looks for headline inflation to edge lower to 0.3% y/y in October as lower energy prices hold the index to a 0.1% m/m increase. Gasoline prices are usually a headwind into the fall but are expected to push even further into negative territory on a year-ago basis, helped by base-effects from last October. Travel services should fare better on an adjusted basis; this component has fallen by an average of 6% m/m in October over the last five years but already sits well below year-ago levels as a result of COVID. Elsewhere, we see a larger positive contribution from shelter after a surge in new home prices, which will feed through to higher homeowner replacement costs and offset falling mortgage interest costs, while motor vehicles are a key source of uncertainty given automakers’ tendency to raise prices in October. Headline CPI at 0.3% is consistent with significant excess supply from the impact of COVID but would still leave inflation tracking above the BoC’s estimate for a 0.2% average in Q4, while core measures should hold stable near 1.7% on average.

Retail sales are forecast to rise by 0.3% in September, slightly above the flash estimate for no change. Motor vehicle sales should see a slight increase which should leave them little changed from pre-COVID levels, with ex-auto sales posting a similar advance to the headline print. Household consumption is underpinned by the strong labour market recovery, which includes jobs added in retail trade during September, although uncertainty surrounding the (since passed) extension of emergency stimulus benefits may exert a modest drag despite payments continuing through the month. Mobility data also shows no significant change in time spent at retail locations, before pulling back in October.