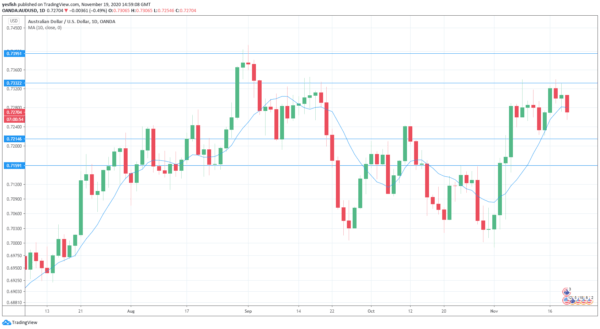 The Australian dollar has dipped lower in the Thursday session. Currently, AUD/USD is trading at 0.7268, down 0.50% on the day.

There was excellent news on the employment front in October, as the economy created a whopping 178.8 thousand jobs, crushing the forecast of -26.7 thousand. It also marked an impressive rebound in job creation, after a decline of -29.5 thousand in September. The surge in jobs was all the more impressive, given that most of Victoria State was under lockdown until late in October. This result was all the more impressive as most of the state of Victoria was in lockdown for much of October. The unemployment rate rose from 6.9% to 7.0%, but this increase can be attributed to more people feeling confident about their job prospects and seeking work.

Somewhat surprisingly, the Australian dollar was unable to take advantage of the strong employment releases, and actually has lost ground on Thursday. This is an indication that the drivers of world markets (including the Australian dollar) are elsewhere; namely, in China, the US and Europe.

The Aussie also missed a chance to make inroads against the US dollar on Tuesday, after the RBA released the minutes of its November meeting. Perhaps the most interesting take from the minutes was the transparent manner in which policymakers essentially ruled out negative rates, a scenario which had been floated in recent months. The minutes stated that taking rates negative was not “sensible” and that further easing would involve bond purchases. A negative rate environment would have likely weighed on the Aussie, as investors would have taken their business elsewhere, looking for more favorable interest rate conditions. 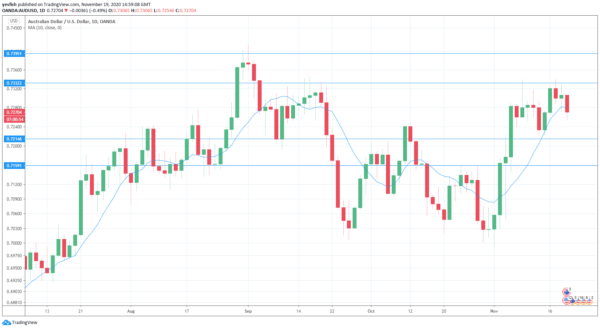